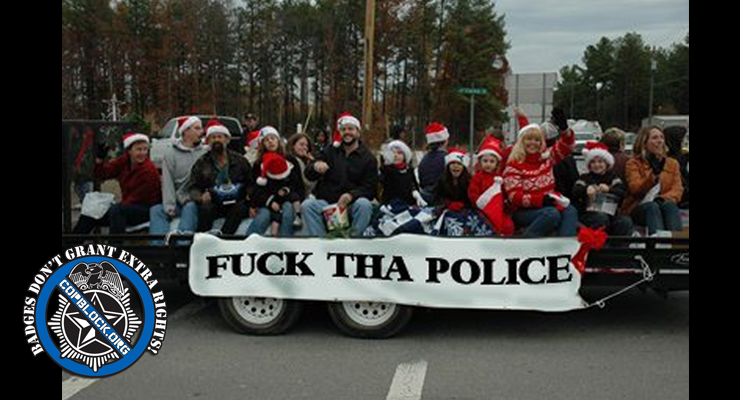 On December 1st Noblesville Indiana will hold their annual Holiday Parade. According to the website:

Join us for the annual Noblesville Christmas Parade! The parade will step off at 2pm at 16th and Harrison and will travel south on 16th Street to Logan Street, west on Logan to 9th Street, north on 9th to Monument Street, and east on Monument to 16th Street where it will end.
The last entry in the parade will be Santa Claus himself, making his debut for the season! Boys and girls are invited to stop by his house on the courthouse square after the parade from 3:00pm – 5:30pm and tell him what they’d like for Christmas.
If your organization is interested in participating in the parade, please call 776-6367 or email cculp@noblesville.in.us for additional information and to request an entry form.

We’ve decided that before this year’s holiday parade kicks off we’ll once again exercise our freedom of speech/expression by chalking the entire parade route. We encourage you to join us as we chalk messages pertaining to free speech, police accountability and our case in Noblesville for the whole town to read.

Why are we chalking the Holiday Parade Route?

Ademo and I kicked off the #MACtour in Noblesville and after a chalk protest in front of the Noblesville police department were charged with criminal mischief. We returned from the Kansas City stop of the #MACtour to chalk the police station again and ended up spending a week in jail over the charges. Unhappy about the treatment we received for redressing our grievances with government monopolized law enforcement the #MAC crew has decided to use the parade as an opportunity to raise awareness about government censorship to the town of Noblesville. Although widely frowned upon by police, chalking is not illegal and has multiple court rulings upholding it as protected free speech – especially on public property and city funded events.

We realize that chalking an area this large is going to be a lengthy endeavor and we are going to need some help. We are hoping that you’ll be able to join us so that we can fill each sidewalk, intersection and public property with a holiday/informative message. We’ll provide the chalk and you can write whatever you want.

If you would like to join us in this free speech action we would recommend bringing cameras to document our freedom of expression. It’s not “required” but it’s always better to have a camera when you are participating in activism. We will provide as much chalk as possible but with an area this large it’s better to have more chalk than to need chalk and not have it. So feel free to bring some of your own.

JOIN THE FACEBOOK EVENT TO CHALK THE PARADE ROUTE HERE