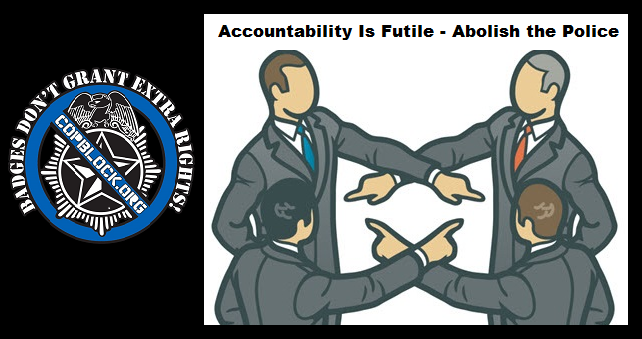 All of us here at the CopBlock Network have varying opinions about what the overall goal of our activism should be. There are many different ideas on what we hope to be able to, and believe that we can, accomplish. Not everyone wants to see an end to public policing. Some want to transition to that position over time. Others think that the function of police should be replaced with similar private services. There are as many unique ideas and approaches as there are individuals among us. What follows are my own opinions.

Accountability is futile. There really could be nothing so simple to understand yet so difficult to convey. Although it has been illustrated in endless individual cases, people are unwilling to hear the truth about the institution of policing as a whole. Yet what it really boils down to is this- the police, the justice system and the rest of the state has a conflict of interest. Like any other system or set of complex relationships, it is duty bound to protect itself and those within it. A thing divided against itself cannot stand. So no matter what it must support its whole self, even, and especially its weakest parts. Systems are like living things. They desire growth, safety, harmony and most of all- to survive. Yet because the police are made up of fallible human beings with faults, it is inevitable that some members will become criminals themselves. Criminals empowered and protected by their authority. And because the larger organism must protect itself, it must prevent its weaknesses from outside attack. And accountability is that attack. So over time policing becomes a haven for the maliciously criminal and psychotically violent. Since police will protect their own, there is no safer place for social deviants to find a home to commit their atrocities. Because no matter what, a thing divided against itself cannot stand, and the police will do whatever they must to protect their own. Accountability is futile.

Okay, now off the top of your head think of three cops who committed crimes against citizens whose punishments were as harsh they would have been had citizens committed the same crimes against other citizens or the police. I’ll wait…

Okay, now think of as many cops as you can who got off scott-free or with punishments much lesser than you or I would face for the same crimes. You probably had five in your head instantly, but still are not able to answer the first question.

Accountability is futile. It is a distraction. It is an attack that the system can easily counter, which is why they don’t mind it being launched at them. They use it to brainwash their ardent supporters into an even greater stupor of mindless and obsessive worship. And so long as the only politically correct attitude of police criticism is accountability, they are safe from the logical conclusion that they are not necessary. That they are, in fact, amongst the greatest problems and related to the rest. Accountability is not just futile. It is part of the problem, for it is a blindness which is able to fool us into believing we are seeing.

Abolish the police. Accountability is a dangerous lie. The system cannot be reformed. The system is working perfectly as a system just the way it is. Any idealized state of policing is a myth. That system would be untenable and could not meet its own requirements. It will always come back to this.

This includes private policing. It has demonstrated historically that it can do no better. From Pinkerton to endless cases of private authority abuse in modern times, we can see that private policing just does the same as its public counterpart. It protects itself and its greatest benefactors first and foremost. Private policing, like public, would just become another fascist tool of the oligarchs. And besides that, it is unnecessary.

Police do not stop crimes. Criminals have this tendency to commit their crimes out of the way of police. When police do arrive at an active crime scene, things generally just get worse.

Police do not deter crime. If this was true the growth of the police state would have meant the end of crime by now. Yet policing does create crime. Several generations of socially and economically downtrodden people have been filtered through this system long enough to destroy individuals, families and communities. This leads to cycles of crime, as the downtrodden are given narrow choices for survival. It leads to the universities of criminal behavior that our prisons have become.

Police have only one response to crime, which is to take advantage of it and profit from it. Crime is its nourishment, so it has far more to gain by creating it than stopping it. This is true of public policing and it would be true of private policing.

If we were to end the institution of policing today would there be sudden total disorder? Likely not. While there would likely be an immediate spike, it would then decrease over time to levels far below what it is now, as the feedback loop policing creates would stop amplifying the problem. The only reason there might be an initial surge is because the effect policing has had on the populace. Once its effect diminishes, so would the counter response.

Believe it or not, most people are actually not that bad. In so far as natures tendencies to produce deviants who commit violent crimes will always exist, those acts are still statistical anomalies compared to the infinite peaceful interactions that occur between individuals every day. Goodness is the human norm. To bend our entire society to respond to a small percentage of deviants robs good people of opportunities that these responses rob from us. Our freedoms and liberties are more valuable than our mere safety. There are worse things than death. Civilization should build itself around its aspirations, not its fears.

So then what do we do when there are no police? We adapt. That is our greatest strength as a species. We recognize new problems and create new solutions. Communities will find needs that must be met and might do so with rational, compassionate and non-violent means. Assistance, arbitration and counsel are tools we can explore to meet most day to day needs. Most of the time people just need help, not emotionally unstable and low intelligent agents with guns who may imprison or kill you, responding to community issues. Where that fails we might seek investigators to seek out the facts of crimes so that they can be dealt with between the respective parties in peaceful ways.

More importantly, safety should be a Do-It-Yourself issue. Learn to defend yourself. Both mentally and physically. Natural consequences are the strongest deterrent against crime. If criminals fear instant reprisal for their actions, they might think twice. Yet the current system causes potential and actual victims to fear legal consequences for taking matters into their own hands. This empowers criminals and police, but leaves the rest of us at a strong disadvantage. We need not concern ourselves with how to treat the worst among us, but how to best treat one another. Let us not build a world around fear and worst-case scenarios, but around faith in one another and confidence in our ability to respond when things go wrong.

And if you absolutely must rely on others to protect you, hire a bodyguard. If you are that paranoid, or have given others enough just cause to harm you, then protecting yourself should be your own responsibility. Not that of society.

In the end, there is no society. It is a grammatical construct. There are only individuals. Let the world be a place where individuality can be tolerated, explored and praised. Let us not create systemic institutions which ask us to sacrifice individuality, the only truth of the self that can be known, for collective fears we use to create that which we feared out of our response.

There is nothing to fear. Only consciousness exists. Death is an illusion. Fear is the enemy of freedom. Conquer fear and you become infinite and eternal.