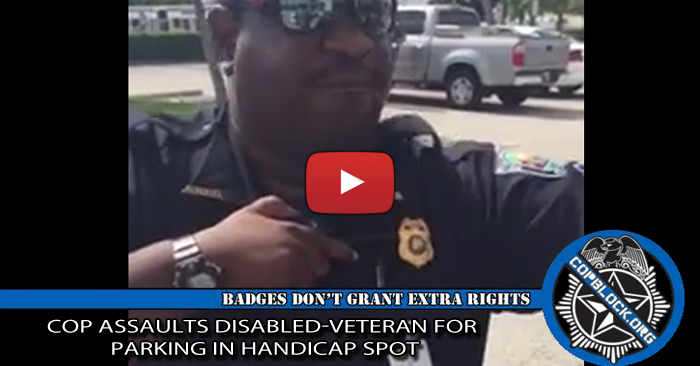 It was announced earlier today that the Sgt. Garry Wilson, of the Riviera Beach Police Department, has been charged with battery and criminal mischief, resulting from a confrontation he had with Isiah James over whether he should be using a handicapped parking space. (See video embedded below.)

In the incident, which James recorded on his cell phone, Wilson can be seen insisting that James should not be using the handicapped parking space, because he doesn’t believe he is disabled enough. Wilson bases that on the fact that James was able to walk into the store and back.

In spite of James explaining to him that he his mobility is limited to short distances due to the effects of an IED explosion in the Middle East, Wilson continues arguing that he isn’t sufficiently disabled to use the space. He does so in a very insulting and harassing manner. In addition, at one point he slaps the phone out of James’ hand to try and prevent him from filming the encounter. In the video, James states that he broke his phone in the process. Sgt. Garry Wilson, a 20-year member of the department, will be arraigned on Dec. 2 on battery and criminal mischief charges. Both charges are misdemeanors.

Wilson was placed on administrative leave Aug. 11 after he was caught on film knocking a smartphone out of Isiah James’ hands during an argument over a handicap parking space outside at the Walgreens store at Broadway and Blue Heron Boulevard.

James captured the dispute on his cellphone. Wilson can be heard berating James, saying he has no right to park his vehicle in the handicapped space and that he isn’t disabled. Ultimately, Wilson grew so upset that he knocked the phone out of James’ hands, damaging it.

James posted the video on Facebook and it quickly went viral.

James served three tours with the Army in Afghanistan and Iraq between 2006 and 2011. He sustained a traumatic brain injury and wears braces on both of his legs.

Based on the legal definition of criminal mischief in Florida, it appears both charges are related to Sgt. Wilson slapping the phone out of James’ hand.