This story was submitted via the CopBlock.org’s submission tab by the Carollton Speed Tax Youtube channel. Make sure to check out more of their awesome content and efforts to promote transparency in Texas. Carlton Speed Tax took the time to insert freeze frames and the findings of the complaint into the video.

SUBMISSION
Carrollton Police are known to dance along the city limits of neighboring cities in search of revenue. Sunday morning on November 1, 2015 we noticed a Carrollton police SUV on Dallas City property running radar. They proceeded to pull over a vehicle within the Dallas city limits .

Having questions about this tactic, we filmed the stop. After the officers had finished with the vehicle, we asked the officers to identify themselves as they are required by the Carrollton Police Department Policies and Procedures  #4.02.005. Both officers refused by ignoring my request. They got back in their vehicle, rolled up their windows and drove away.

On November 6 2015, we went to the Carollton police department, and filled out a complaint about the officer’s refusal to identify, and left it with a commander. He said they would run it through the system, and let me know the results in a few days.

On November 13 2015, we received a letter from the Carrollton Police Department’s Professional Standards Division (commonly, Internal Affairs) stating they reviewed the complaint and decided the actions were in line with CPD policy and procedures, even though they clearly violated policy.

This was supposed to be a pretty 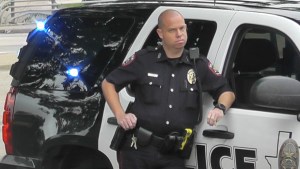 innocuous test in hopes they would give us hope that the system worked somewhere… Anywhere within the city of Carrollton. If they can’t admit even the most minor infraction even in the face of video proof, how are we supposed to trust them for anything?

Carrollton police seem to enjoy the quiet anonymity of acting like the “good guys”, but in this case, it would appear that the actions completely eclipse the act.

Many of you probably think this is a small violation when it comes to law enforcement officers. You may be wondering why I am blogging, or why this video was submitted, about these cops but before you call the Wambulance understand that this. The reason the police have to identify themselves is so that people can verify that they’re not imposters. This not only builds trust but it keeps people safe from potential rapists posing as cops… Oh I forgot the cops are the rapists now. When it is acceptable to dismiss small rules as exactly that, it opens up a door to justify taking shortcuts and disregarding policy and laws altogether. Or as some would say, believing that “badges do grant extra rights.”

These “minor” violations only add to the growing distrust between law enforcement and the general population. If police officers can’t be trusted with following rules as simple as identifying yourself to the very people who you they claim to protect then how can we expect them to follow any rules? Especially those of a fellow officer?

If you feel it is unacceptable for public servants to refuse to identify themselves and goes against the entire philosophy of public servant consider giving the Carlton Police Department a call – (972)-466-3290. Ask for Commander Derrick Miller and inquire about the behavior of Officer Kaiser and his partner – who is believed to be Officer Johnson. If you can’t call them, leaving them a comment or review on their Facebook page.