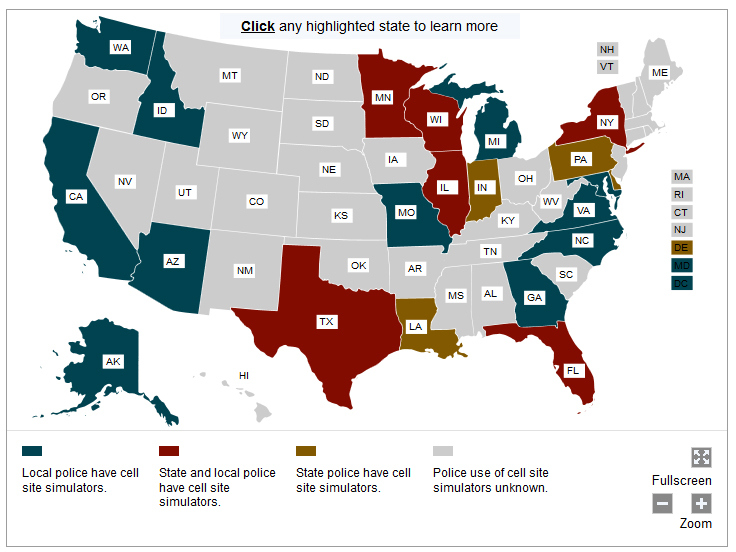 The American Civil Liberties Union (ACLU) has released a map of states that are known to use military grade spying technology known as “stingray”.  They have pinpointed 50 agencies across 21 states that use the intrusive illegal devise.

According to the ACLU “Stingrays, also known as “cell site simulators” or “IMSI catchers,” are invasive cell phone surveillance devices that mimic cell phone towers and send out signals to trick cell phones in the area into transmitting their locations and identifying information. When used to track a suspect’s cell phone, they also gather information about the phones of countless bystanders who happen to be nearby.”, the institutions website claims.

The device can easily be abused by a corrupt law enforcement officer who is prejudice against former lovers, spouses and any race or gender.

Baltimore police have used stingray technology over 4,300 times under federal secrecy according to the international business times.

Local police would rather let individuals go for their crime than give up their stingray secrets according to CNN Money.

On April 15, CNN Money published  one example of the FBI working with a county sheriff’s office to squelch any possible leak regarding the Stingray’s illegal use on American soil:

The FBI has a secret device to locate criminal suspects, but they would apparently rather let suspects go free than reveal in court the details of the high tech tracker.

The device, called a “Stingray,” tricks cell phones into revealing their locations. Closely guarded details about how police Stingrays operate have been threatened this week by a judge’s court order.

Judge Patrick H. NeMoyer in Buffalo, New York, described a 2012 deal between the FBI and the Erie County Sheriff’s Office in his court order Tuesday. The judge, who reviewed the deal, said the FBI instructed the police to drop criminal charges instead of revealing “any information concerning the cell site simulator or its use.”

Erie police had long tried to keep that contract secret, but the judge rejected that idea and ordered that details of the Stingrays be made public.

“If that is not an instruction that affects the public, nothing is,” NeMoyer wrote.