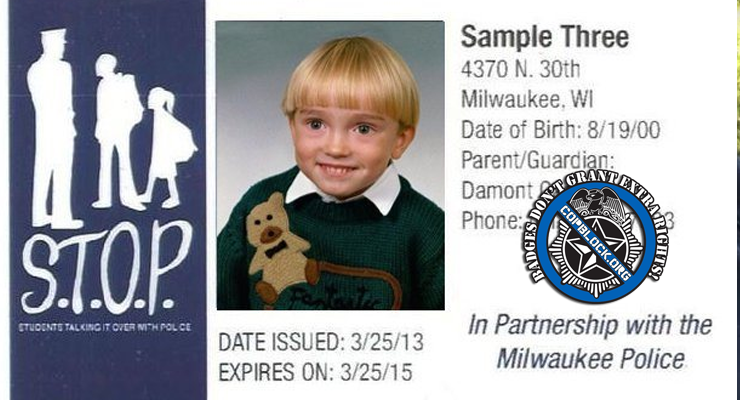 Racine and Mount Pleasant teachers will begin to nominate students to take part in a seven-week police program in local schools called Students Talking it Over with Police (STOP), aimed to curve negative altercations with the youth.

The program was developed by the Milwaukee Police.

Students Talking it Over with Police (STOP)
The purpose of the program is to address the relationship that exists between future young leaders and police in the City of Milwaukee to decrease the chances of an initial volatile interaction and cultivate sustainable positive relationships.

Juveniles in Milwaukee make up a disproportionate number of all individuals that come into contact with Milwaukee police officers on a daily basis. The Milwaukee Police Department is cognizant that police/juvenile contacts too often become volatile, where force is used, causing life threatening and non-life threatening injuries. In situations where physical force was not a factor, arrest and detention of these youths was still too often a final outcome of their interaction with the police. The Milwaukee Police Department understands these issues exist, specifically with juveniles due to lack of maturity, understanding why police do what they do, perception of police from peers, and other negative influences, and fear.

Students who complete the police course will receive a special identification card allowing local authorities to respect the training your child went through and prevent negative interactions.

The card will include the S.T.O.P. logo, the student’s picture, date of birth, address and phone number.

“When police see this card, the officer will know the young person has been coached on what to do and the officer will respect the training the child went through,” said Racine Police Chief Art Howell. “The overall objective is to prevent traffic stops from going into a negative direction.”

The course will include role-playing interactions with local police, and information on how they deploy resources.

“We show the students, here is your city, here is where crime happens,” Howell said.

Then they ask: “If you were a commander, where would you deploy resources?”

Police Chief Magazine published that the recent success of STOP “is likely due to the extensive work that MPD put into developing a formal program curriculum, preparing workbooks and training manuals, and training STOP facilitators. As part of the evaluation, observations were also conducted of STOP sessions. These observations revealed that even though there were several different sets of facilitators, STOP was consistently delivered in all the school settings with fidelity. It is unlikely that without these efforts STOP would have produced the same consistently positive results across school settings and youth populations.”

The law enforcement publication recommends your local school subscribes to the program as well. “Given recent high-profile events concerning poor community-police relations, other police departments should consider implementing STOP or a similar program as a way to address juveniles’ negative perceptions of the police.”

The program has its other perks, Imana Ortiz was noticed for her leadership role in the program and received $1,000 and an IPad.

“The program is very inspiring,” Ortiz said. “It helps young leaders be recognized.”

Local schools even prepare a special awards ceremony, honoring students who excel in the police program.

One Milwaukee teenager made Wisconsin history by becoming the first STOP graduate to be hired as a police aide, an apprenticeship program aimed at modeling future leaders for the department.

The program has some locals disturbed, one individual suggesting the program is ” Eerily similar to the Gestapo Youth Program. “

“Be careful of this program, if it had been implemented in the town of Newton, New Jersey, a policeman the likes of Jason Miller may have had a bigger field day with these kids. In the end, this program may further risk the abuse of power. Respect must shared by all parties.”

One commentator alleging to be former police officer had this to say on the subject of STOP,

“It seems that its not too far in to the future we will be asked for our “Papers” by the police and the Secret Gestapo. Since when were we required to carry official papers? Sure it is a good Idea to have an Id just in case you get killed by a cop or car. At least they can send the body home to the right family that way. Children of all ages should be taught their full name, address, and phone number. They should not need to carry papers as such. Any ID will NOT stop a stupid person from shooting them if the kids get into such a situation. Having BEEN a cop for many years, cops are not going to shoot unless they feel threatened some how. Sure accidents happen, just like that fender bender you had with your car. You did not mean to hit the pole did you? Think people. Cops are under daily threat of being killed when they least expect it. They deal with dangerous people all the time, every day. Do you? They are under horrendous stress daily and each time they approach a car for a simple ticket, they do not know who is in the drivers seat and does he or she have a weapon and want to kill a cop. Think about that. Put your self into the cops shoes for once. I say NO papers for kids should be required.”

Do these courses teach students their constitutional rights in which officers are sworn in to uphold, or are they teaching them proper etiquette such as never film a local police officer and have your ID on a routine stops?

1.1k
SHARES
FacebookTwitterGoogleRedditTumblr
DiggLinkedinStumbleuponMailPrint
You Can Support Cop Block by shoppping on Amazon using the banner below:
BANNERS ARE CLICKABLE