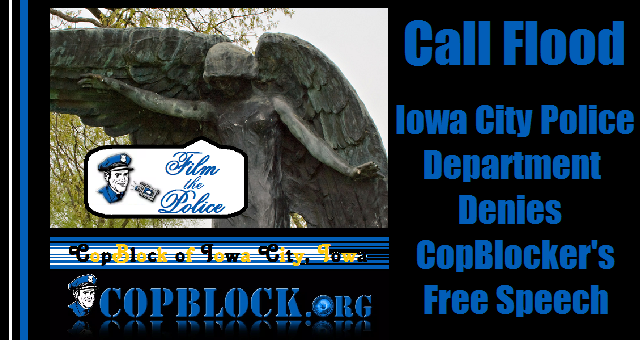 Last week I saw THIS POST in my Facebook feed from the Iowa City (Iowa) Police Department. It is an invitation to have local ‘safety experts’ check your car seats and their installation to ensure maximum safety. Partially because I am an advocate of questioning absolutely everything to insure it can hold up to intellectual rigor, and partially because these ‘for your own/child’s safety’ laws continue to encroach further into every aspect of our life, I decided to question the car seat paradigm in my usual irreverent manner.

My first comment was something along the lines (comments since erased) of, “You should keep your child restrained at all times so that as adults they will be prepared to live in a restrictive police state.”

They responded, “OR,,,, to provide them the best possible protection from injury in the unfortunate event of a vehicle collision.”

My response to that was approximately, “You mean like when children are killed because of police chases involving a suspect who was not an immediate threat to the community?”

While my first comment was technically conjecture, although I would be willing to debate the point with ICPD or anybody else, my second comment was based on many factual incidents. In fact, neither of my comments were even in violation of the ICPD’s ‘Official Social Media Policies’. I did not use threats, direct insults or ‘inappropriate’ language to make these points. My intent was not to bully or harass, but to open dialogues that challenge the propaganda and dogmatic ideologies that litter the ICPD Facebook page. In other words I was using my constitutionally protected right to free speech under the first amendment to create an open public dialogue in a (cyber)public space. I was doing public discourse just like you are supposed to and even then I was banned from commenting on the page and my former remarks were erased.

CopBlock has dealt with similar scenarios in the past. THIS ARTICLE details one instance of social media censorship by police and gives details about legal case precedents clearly illustrating that it is not just ethically questionable for public agencies to censor online, but also against the law. And even though it can clearly be illustrated that the ICPD have broken the law, I will not be holding my breath that the actual responsible party(ies) will be held accountable and arrested for their crime, since ACCOUNTABILITY IS FUTILE.

I have begun contacting civil rights lawyers should it become necessary to challenge the ICPD in a court of law for their despicable denial of my rights. However, I would prefer to see the issue dealt with peacefully. I will discontinue my legal case against the ICPD if they agree to the following conditions.

This is where you, the CopBlock Network of readers and activists come in. In order for the ICPD to take seriously the trespass they have committed, they need to hear about it from as many people as possible. Please consider calling them and sharing your concerns about their infringement on constitutional rights. At the same time you may want to ask them why Iowa City has such a disproportionately high rate of black people arrested, incarcerated and convicted for victimless (usually drug-related) crimes, and why so much of their effort is directed towards victimless crimes and not towards the myriad of unsolved rapes and other crimes directly involving damaged parties? Or you can go to their Facebook page and post this article or leave it in comments sections with a statement of your own. Just a few minutes of your time can go a long way in battling the corruption, malfeasance and aggression of the police state. We truly appreciate your help as do those who will not have these problems in the future thanks to your efforts!