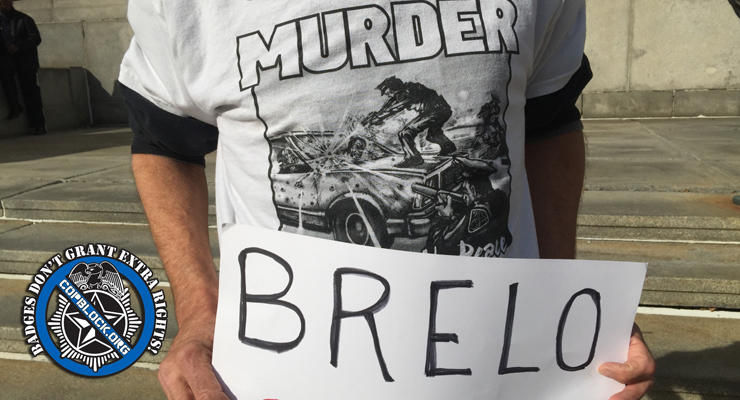 Family members of Mallisa Williams who was shot by Cleveland Police 137 times on Cleveland’s East side, came to City hall today to let the city know about a protest planned for tomorrow on the courthouse steps. Chants of “No Justice No Peace”, and “No Pay for killer cops!” could be heard echoing through the streets of downtown as a group of protesters held a press conference to let the city know they would be back tomorrow for a full on protest of the decision whether or not to rehire Officer Brelo.

You may remember him from being on trial for firing 49 of the 137 bullets that killed Mallisa Williams and Timothy Williams. Officer Brelo was acquitted much to the chagrin of the people of the city of Cleveland. Now they want to rehire him to patrol the streets again. How many more victims will this man create with his violent behavior? Let us say for arguments sake that the killing was justified. Him jumping on the hood of the car and reloading at least twice to reign fire down on two people who were trying to give up, is not, and should not be tolerated by the people who live here in Cleveland.

“The last thing we need is some fuckin’ Rambo jumpin’ over cars with automatic weapons mowing down anyone who’s car accidentally backfires!” said a concerned citizen of Cleveland, and  I have to agree. If cops have to exist, they sure don’t need to run around acting like the terminator! They are not supposed to be Judge Jury and executioner at will. If we stand by and allow this kind of thing, then we are fault and we can only expect it to get worse! Join us tomorrow downtown on the steps of city hall to let these people know, WE DON’T PAY FOR KILLER COPS!