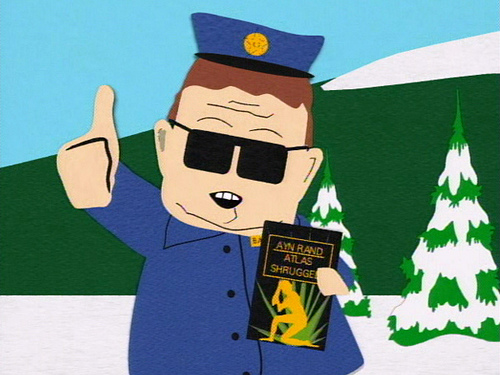 South Park’s recent episode, “Naughty Ninjas” featured the issue of police brutality and did not disappoint (as if South Park ever really disappoints!)

The opening scene features a SWAT raid on South Park Elementary. Officer Barbrady is seen creeping nervously through the hallways with his gun drawn. The return of Officer Barbrady, who hasn’t been in episodes in some time, was a pleasant surprise. In conjunction with some appropriately suspenseful music, Barbrady makes his way to the school gym where students and PC Principal have gathered. PC Principal is going apoplectic over what is a totally inane issue – a girl texting instead of paying attention during the assembly. He waves around a laser pointer, frightening Barbrady, who gets trigger happy and ends up accidentally shooting a Hispanic kid in the arm.

Subsequently, Barbrady is called to answer for his behavior before the mayor and other concerned citizens. He is reprimanded and fired.

One gets the feeling the SWAT scene at the elementary school was meant to be an exaggeration; yet, the reality is that such a situation is not too far from the truth. Young students in the United States have been subject to all kinds of extreme discipline and abuse by law enforcement in the context of school. A particularly egregious and recent example would be that of Richland County Sheriff’s Deputy Ben Field‘s violent encounter with a female student who refused to leave the classroom.

South Park is a cartoon and is certainly not held to any standards of journalistic accuracy, yet over the years, its social commentary has often been more informative, incisive, and honest than much of the garbage masquerading as news in the mainstream media. Even so, it’s still worthwhile to note a few inconsistencies in this episode. While well-intentioned Officer Barbrady is a typical buffoon and predictably lost control of his gun, in reality, it’s not just incompetent, lazy, clueless cops like Barbrady who end up killing children. For instance, Cleveland police officer Timothy Loehmann, who shot Tamir Rice, a 12 year-old with a fake gun, was found to have acted “reasonably.” The cop who shot Aiyana Jones while participating in the filming of a reality TV show is back on the force. Thus, plenty of officers deemed perfectly fit for duty also kill children.

In addition, the flippant attitudes and flagrant disrespect exhibited by the citizens of South Park toward police were not met with real-world consequences. For instance, in the real world, hurling a shopping cart at a policeman would likely, if not certainly, result in charges of assault on an officer. Similarly, if Randy Marsh flashed his penis at police officers in many states in the country, he would soon find himself a registered sex offender.

Yet, the episode had more lucid moments than ridiculous ones. When the police force comes under criticism and pressure for abusing minorities, they simply decide to do absolutely nothing and start a hula dance studio at their headquarters. Parallels of this are not in short supply in real life. Anytime anyone criticizes police brutality, police and their apologists without fail suggest that police withhold services entirely, and “Let’s see what you do when you’re getting raped and murdered and the police don’t come to help you.”

Ultimately, the most poignant point of the episode seems to be that police are stupid assholes, but so are the civilians.

Like many people, the people of South Park conflate absence of police with absence of security, which are not in fact the same thing. Indeed, private security exists throughout society without police presence. Stores supply their own security guards, people install home security devices that alert an armed response, and plenty of people practice self-defense; these are all valid forms of security, even if police were entirely absent.

South Park residents clearly are unable to appreciate this distinction and thus find themselves completely without either police or security of any kind, which at first, is a source of great glee for everyone. Yet here, the show does not take the predictable and cliche turn that would appeal to many Americans – police going on strike, and crime and murder running rampant, with society descending surely and steadily into anarchy.

Instead, conditions in South Park remain relatively acceptable, with the exception of an increase in the homeless population outside of Whole Foods. This inconvenience is intolerable to South Park residents. To compound the problem, like many Americans, the denizens of South Park become irrationally paranoid about terrorists, and decide they must have law enforcement do whatever it takes to ease their fears – even if it means killing children (a fantastic analogy for America’s War on Terror). However, at this point, South Park police have quit their posts and are using taxpayer money to operate a hula class, so they refuse to help.

Eventually, the residents of South Park become so agitated about fake terrorists and homeless people outside Whole Foods, they decide it’s worth allowing police to abuse minorities in exchange for continued enforcement of their petty agendas and to assuage their unfounded fears.

Ultimately, South Park civilians  are willing to murder children to feel safe, and pay lip service to the plight of police abuse victims, but gladly sweep the issue under the rug when they realize they can no longer get the police to enforce their stupid agenda. The episode paints a delightfully comedic portrait of ignorant and irrational people supporting police in the enforcement of ignorant and irrational laws.