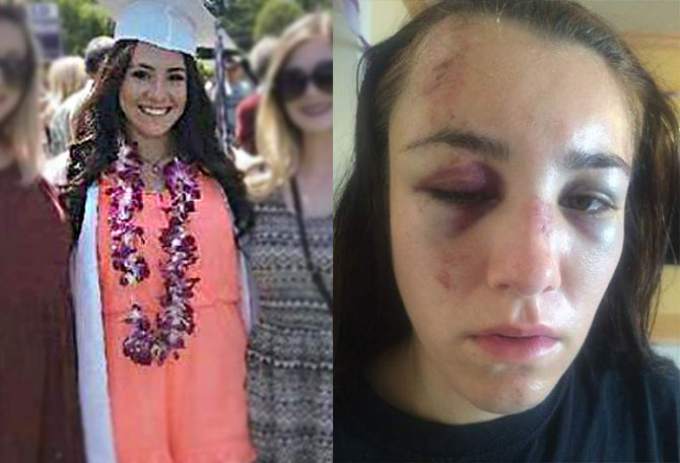 Last week a lawsuit was filed against Sonoma County alleging police brutality by one of its deputies against a female, who was 18 and weighed 115 pounds at the time. According to the lawsuit, Deputy Marcus Holton assaulted then arrested Gabbi Lemos after she verbally objected to him physically pulling her sister out of a car she was a passenger in.

Holton had stopped after seeing Karli Lemos’ boyfriend parked with a trailer attached to their car near their mother’s house with the vehicles’ hazard lights on. Karli, Gabbi’s sister had returned after leaving, because she realized she left her phone behind. She had retrieved the phone, returned to the car, and was preparing to leave again when Deputy Holton arrived.

According to the PressDemocrat.com:

Holton asked the boyfriend to step out of the vehicle, and then at some point walked around and opened the passenger door with Karli Lemos seated inside. Lemos, another sister and their mother were outside the house at this point, drawn by the flashing lights on the patrol car.

Gabbi Lemos, during an interview Thursday, said she spoke up when Holton threw open the passenger door and grabbed her sister.

“It was scary seeing all his anger toward her in that moment. That’s when I decided to say something,” Lemos said.

Lemos rushed forward, according to the lawsuit, and “complained to the deputy that he had no right to pull her sister out of the vehicle and he needed to ask her first.” She also demanded he call a female deputy to the scene.

Holton then “violently shoved Gabbi” backward, and “yelled that no one else was coming,” according to the court filing. She said “You can’t touch me! We have rights!”

Gabbi’s mother told her to go into the house, and Holton followed as the teen began walking up the driveway, the papers said. Her family locked arms and tried to stand between the deputy and Lemos, but Holton “bolted around the family and without a word caught Gabbi from behind the neck in a chokehold, lifting her small body off the ground several feet before throwing her face-first onto the driveway.” “Deputy Holton put his knee in the back of Gabbi’s head and began grinding her face into the gravel, despite her screams and her family’s pleas to stop,” the lawsuit said.

He put her in a patrol car. She was taken to a hospital and then booked into the Sonoma County Jail. No one else was arrested.

Lemos was released on bail several hours later and returned to the hospital because her face began to swell, she said. At that point, hospital staff asked if she’d like to file a report regarding the incident, and a deputy was dispatched to the hospital to document her injuries.

Lemos said she didn’t leave her house for a month after the incident.

“I felt like I couldn’t leave my house. I didn’t ever want to see him again or run into him,” Lemos said. “I was scared.”

Not surprisingly, the Sonoma County Sheriff’s Office found nothing wrong with Deputy Holton’s violent behavior toward Gabbi Lemos, in spite of the fact that she was never even accused of anything outside of verbally protesting the treatment of her sister. As stated in the quoted text, that endorsement of Holton’s assault on Gabbi Lemos also disregards the fact that neither Karli Lemos, nor her boyfriend were arrested or even cited for any sort of infraction to justify them being detained in the first place.

That probably shouldn’t be surprising based on both the Sonoma County Sheriff’s Office and Deputy Holton’s recent conduct (also via the PressDemocrat.com):

Holton was cleared of any criminal wrongdoing in a 2011 shooting that wounded a man he said was reaching for his waistband during an encounter on Todd Road. He shot the man twice, wounding him in the abdomen and buttocks.

Lemos’ case is the sixth pending civil rights lawsuit against the Sheriff’s Office.

A woman accused a Sonoma County Jail guard of harassment and sexual assault after a February incident during which she claimed he asked her to show her breasts and exposed his genitals.

In another case against correction officers, a group of 20 inmates claim they were beaten by guards in May during what they’ve described as a five-and-a-half hour attack, which the Sheriff’s Office has adamantly denied.

A Forestville man is asking for $3 million to settle an excessive- force lawsuit against several deputies after he claimed they beat him during his 2013 booking on drunken-driving charges, shocking him 23 times with a stun gun.

The parents of 13-year-old Andy Lopez filed a wrongful death claim in federal court against the county and the deputy who mistook the boy’s airsoft BB gun for an assault rifle.

The family of a Larkfield man is also suing the Sheriff’s Office after the man committed suicide, claiming the SWAT team’s tactics during a 12-hour standoff at his home led him to take his life.

When you give people a free pass to beat, shoot, and outright murder people, they tend to use it.