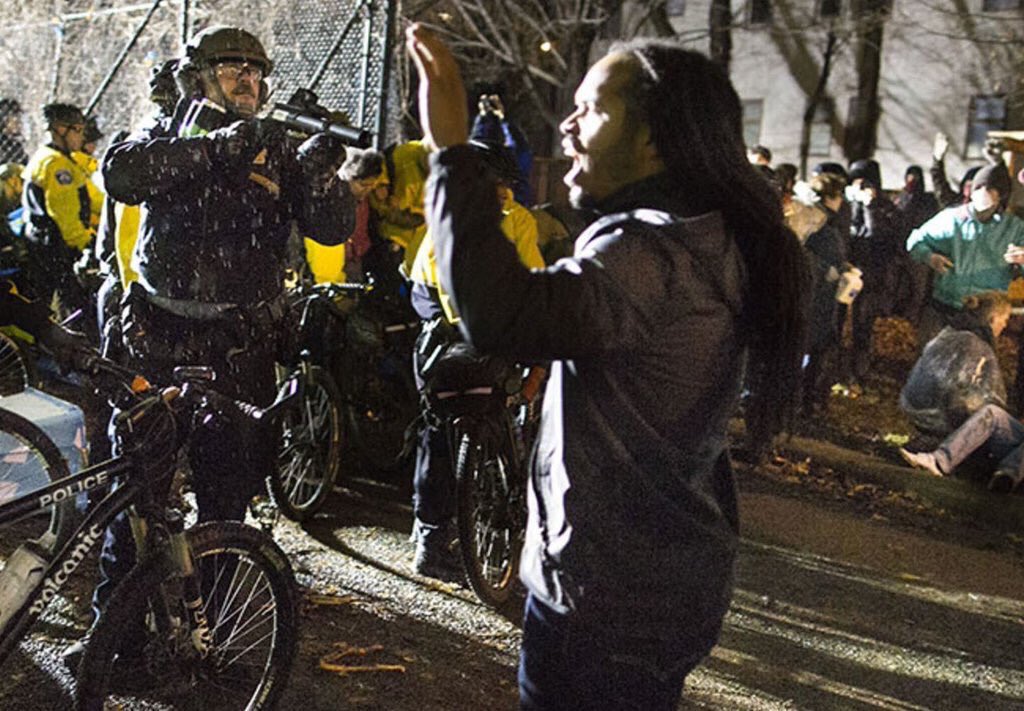 Frederic Bruno, the lawyer representing Dustin Schwarze, one of the MPLS police officers involved in the shooting of Jamar Clark is now claiming, that not only was Jamar Clark not in handcuffs, he was trying to pull the victim(his girlfriend) out of the back of the ambulance. Sometime during the struggle Clark gained control of the weapon of one of the officers. Bob Kroll the president of the police officers union told reporters

“It was in the holster and he had physical control of the hand grip,”

Kroll and Bruno are disputing eyewitness accounts that Clark was handcuffed when he was shot. Although the police claim that there are multiple partial videos of the incident they have yet to release them. This is a sign that the police and local government are formulating a politically correct defense for their officers’ actions. They refuse to released the video of the incident until after the investigation, more than likely because they are damning and would throw a wrench in the machine that is working overtime to shield these officers from any responsibility for their actions.

A lawsuit filed by Billy McCoy, alleges that Schwarze and two other officers harassed him, “falsified police reports, and conspired with a private citizen in a continuous and unbroken sequence of unlawful searches, intimidation and phone threats” in order to force him to become a police informant. The case was settled out of court and dismissed from the docket in April 2011, and the details were sealed.

The story continues to grow even more outrageous, as claims from local government officials that demonize Jamar Clark and are selling the idea that his murder was justified. None of these claims have been substantiated by objective evidence as the city refused to release the tapes, they are also disputed by eye witness accounts who say Clark was handcuffed. As outrageous as this behavior is, it should not come as a surprise that the self serving institution of government does whatever it can to protect itself. The thousands of lives lost, millions of dollars payed in wrongful death suits and months of disruptions due to police killings all over should be enough to make any local representative do whatever possible to appease their angry communities, promote transparency and hold the individuals responsible.

Multiple politicians were present yesterday including Keith Ellison who represents part of Minneapolis in Washington. His unarmed son Jeremiah, was held at gunpoint during a protest regardless of the fact that he had both hands raised. Ellison retweeted the photo and his disbelief with the officers behavior to his 69,000 twitter followers

“Photo is agonizing for me to see, My son is PEACEFULLY protesting w/ hands up; officer is shouldering gun. Why?”

Keith Ellison was one of many politicians in attendance yesterday. On Facebook he called on law enforcement to exercise restraint and asked the protesters to remain peaceful.

“We must all be committed to establish the facts of what happened in the interest of justice. We must come together to heal our community and work together toward justice and fairness. I call on demonstrators to remain peaceful, and on law enforcement to exercise restraint.”

Today at a city council meeting 3 activists were removed from the meeting for speaking out against the killing of Jamar Clark. On the way out, Michelle Gross of Communities United Against Police Brutality yelled

“We will be heard. You will be held accountable for what you have done to our community.” This was just hours before the NAACP’s planned march and candlelight vigil. The march and vigil will be presided over by NAACP national president Cornell William Brooks. He believes it will increase the pressure on the MPLS police in the wake of the death of 24 year old Clark.