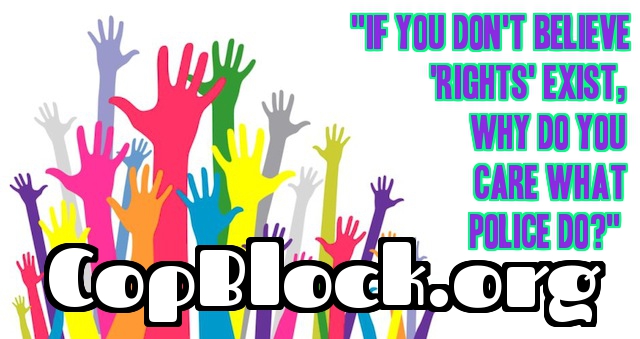 Generally when I get contacted by a reader it is only for them to tell me how stupid that I am, how many awful things they hope happen to me, or what awful things they would do to me if the ran into me. So it is always refreshing when somebody reaches out to me respectfully with genuine concern or curiosity, especially when they address their concern/curiosity with specific questions. Being asked something this way gives me the opportunity to reply in a specific way that may cause me to have to rethink or think further about a topic. Honest questions from well intentioned people can be quite informing in and of themselves, and become even more so in the process of answering them.

The last few days I have been speaking with someone who wanted clarification on statements I have made regarding ‘rights’ HERE at CopBlock and HERE at my own website. He specifically asked about ‘Basic Human Rights’, but regardless of the modifier, it is my position that rights do not exist. I will reprint portions of our conversation here, to elucidate my thoughts on the subject.

Question- “If you do not believe that rights exist, why do you care what police do?”

Me- Because it generates negative subjective experience in individual lives. IE: It makes the world suck to live in.

Would you want to be a hypochondriac? The diseases you feared would not actually exist. But the experience of hypochondria would still lower the quality of your life.

What does it mean to exist? Existence generally implies an objective truth. But we only experience the subjective qualities of phenomena. Existence is irrelevant. The argument for every tyrannical statist paradigm uses some made up necessity formed from a basic ideological confusion between objective truths and their own personal experiences. They will claim their fears ‘prove’ the existence of the threat. Right now a situation in Paris has people afraid, a fear which they use as ‘proof’ that all people from Syria are potential terrorists trying to harm them. The confusion about objective and subjective makes us ignorant. While I subjectively believe that the concept of rights should serve as a guideline for our societal and individual interactions, I will not project that desire into an eternal absolute truth, because that is intellectually dishonest.

Ok. I think you’ve perhaps done yourself a disservice then by spending the amount of time you did in the article stating that basic human rights don’t exist.

They do not exist.

My mind immediately went to, ‘what would the world look like without them?’

Imagine what a world without bad logic would look like? The concept of rights ‘existing’ is illogical. But the outcome the concept of ‘rights’ seeks is not. So rather than believing they exist, we can believe they are an honorable path with a worthy outcome based on our own moral and rational choices, without the necessity of making any metaphysical statements about reality or existence.

Did you believe in Santa Claus, Easter Bunny or Tooth Fairy as a kid?

Was there value to that belief despite the fact that they did not actually exist?

Lol, over thinking that. I HATE dishonesty. But sure.

I think there is, too.

But that value would have been lost if over time you continued to literally believe they existed, rather than understanding that the belief held a useful function regardless of ontological status.

In for a penny, in for a pound.

The problem, then, with stating a certainty of the existence of ‘rights’ is akin to an adult believing in Santa. Mature intellects need to be able to discern why something is useful, because it is absolutely true, or because it is the best functioning model in a given situation.

The menu is not the meal.

When we use ‘rights’ to justify the existence of police and the state, we must define them in a specific absolute way which does not ‘exist’. So not only does a misunderstanding of rights lead to logical issues, it leads to beliefs in a falsehood that are used as ideological tools to sway our reasoning against us for the benefit of those who seek a monopoly on defining our rights for us. So we should be careful when using this concept, because its misuse or misconstruction can be powerful weapons in the hands of the misinformed and the maligned.

This may seem like mere semantics but I find the distinction important. It is rather, a problem of semiotics, which deals with how language and concepts can be sorted between that which represents something else and that which conveys useful meaning. So let us break down the original question by viewing it from the angles of ‘content’ (what it literally asks) and ‘context’ (the underlying assumptions in the question).

Content- If I were to have answered the question ignoring all of the assumptions, I would have had to say that I do believe in ‘rights’, in so far as I believe that they work in practice, on both a rational and moral/ethical level. That is, when they are based on voluntary consent, and not predicated on aggressive force. They provide an outline from which we can construct positive social interactions.

Context- However if we dissect the sentence to see what it means (not just says) we run into a problem. Regardless of whether I believe in the functional use of the concept ‘rights’, it would be impossible to illustrate their actual existence. Generally the way in which we determine whether a thing exists is if we can observe it. But a right is not an object. We cannot make a direct observation of a right. We can observe qualities of a ‘right’ by observing interactions in which the concept is being applied, but those qualities do not emanate from a specific object in reality. We could not use empirical methodologies to investigate ‘rights’, which is not to say that we cannot observe them, create statements about them based on our observations, test the validity of our statements and make a predictive model from the results. The term ‘exists’ does not apply to the term ‘rights’, so the context of the question defies rational discussion.

Yet we can ‘believe’ in rights. We can define the concept and make consensual decisions as to their validity in our interactions. The term ‘belief’ has taken a lot of damage, as it has so much historical context. It is often considered a religious concept, even though belief exists in every aspect of human cognition and has no special connection to religion or metaphysics in general. Do beliefs ‘exist’? Again, that question is irrelevant, since we cannot quantify a ‘belief’. Yet to say that a belief does not ‘exist’, since that opinion itself cannot be quantified through logical or empirical means, is itself a belief.

The point is, you believe things. We all believe stuff. And what we believe becomes a filter for our perceptions and interpretations. So the important questions we face in the world and when discussing the police state are not the ones that ask what is true about the world, but the ones that help us create the world we truly want to live in. And if you believe in social order reliant on aggressive violence and other forms of force, then I believe you probably don’t understand the complexity of the world around you and are merely reacting to the world from an irrational state of fear, panic and emotional distress; but not from reason and logic. And that kind of activity is deadlier than any other force on earth. No criminal, terrorist or even government could ever do as much harm as a delusional majority who trust implicitly their own unexamined assumptions.