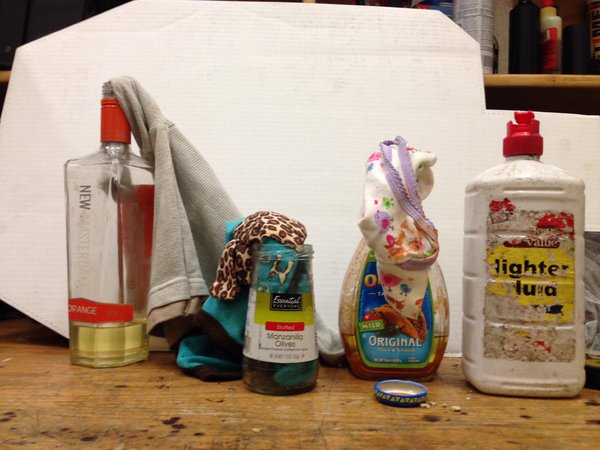 An hour ago the MPLS police tweeted photos of molotov cocktails made using clothes, liquor bottles, what appears to be a taco sauce container and lighter fluid near the 4th precinct. Whether these were actually made by protesters has yet to be determined.

Police recovered these items near the 4th Precinct tonight. Bottles are filled with gasoline for 'Molotov Cocktails' pic.twitter.com/zqlv3v8nkh

This is not the first time that the police have blamed protesters for incidents they had nothing to do with. On Wednesday they tweeted that protesters were using mace on them during a protest that turned violent as cops tried to tear down the encampment in front of their precinct. A video of the incident uploaded to YouTube proves it was actually another MPLS officer who maced his superior.

Are police simply trying to demonize the protests with claims that they were macing the police and assembling molotov cocktails, in an attempt to turn the eyes of the media away from their murder of Jamar Clark? Witness’s say that Clark was handcuffed but police are saying he gained control of one of the officers weapons while it was in the holster. Neither claim can be corroborated as the police are refusing to release any video of the events that transpired that fateful Sunday morning.

A week of protesting has concluded with the president of the NAACP coming to Minneapolis and presiding over a march and candlelight vigil that was intended to put pressure on the MPLS police department to release the tapes.

“We (the NAACP) are not here to tell you what to do. I believe in what’s happening in Minneapolis.”

Cornell Brooks, president of the national NAACP, one of the nation’s oldest and most influential black civil rights organizations, told the emotional and responsive crowd. Hundreds showed up for the march and it remained peaceful throughout. I don’t believe the protesting will slow down with the appearance of Cornell Brooks, in fact, I believe the appearance of the NAACP president, as well as, the march and vigil the NAACP organized did more to strengthen the resolve of the community than appease their appetite for justice.

The BCA (bureau of criminal apprehension) has made this investigation their top priority and are investigating how the handcuffs found at the scene are involved. Although they wont release any footage they say they have been reviewing footage from the ambulance, portable police cameras, personal cell phones and housing authority cameras. A number of federal agencies are involved and are investigating potential civil rights violations.

LOT OF 7-Obsolete US Law Badges-Navy-Sheriff-Police-Marshal