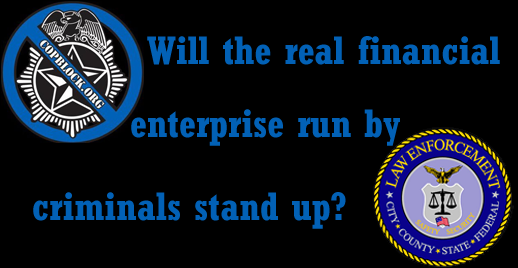 I came across the following bit of nonsense from Civilians Against CopBlock (CACB) in my Facebook feed this weekend. It is beyond ironic that a group that exists solely to give unwavering support to a profession that is predicated on theft and infamous for providing safe harbor to known criminals alleges that Cop Block is a financial enterprise made up of criminals. I’ll take my own deep dive into that later on, but first, a few comments from Ademo regarding some of the lies and inaccuracies in their statements. Ademo’s responses are in bold below:

Now here’s my response to the CACB open letter.

A Profession Trained to Lie, Cheat, Steal, and Kill

Yes, some Cop Blockers do have criminal records, and some don’t. I’m not going to speak to anyone else’s criminal history because Cop Block is a loose network of individuals and I don’t know everyone in it. However, unlike a certain profession that supposedly uses specialized background checks and assessment tools to identify dangerous individuals in pre-employment screening, you don’t see daily reports of depraved acts committed by Cop Blockers in the news.

I personally have never had a run-in with the law other than a few minor traffic citations. I hope to keep it that way, but as any regular reader of this site is already aware, our friends in blue have a special zeal for finding reasons to arrest people who exercise their constitutional rights and proclaim that badges don’t grant extra rights. In fact Kyle Miller of Northern Virginia Cop Block and Stafford Cop Block experienced this first hand recently while distributing jury nullification pamphlets outside of the Fairfax County Court House. After he entered the outer doors to get video of a sign stating there is no filming inside the courthouse, sheriff’s deputies followed him back outside, arrested him for filming, and confiscated his camera. He was then brought before a judge and issued a summons to appear for contempt of court.

On the day of his hearing, the judge agreed with Miller that the placement of the sign (at the inner doors just before you go through security) gives the impression that the no recording rule doesn’t apply until after you go past the sign. Even though Miller felt his arrest was retaliation for the jury education outreach he was doing that day, he agreed to plead guilty since the fine was only $25 and the judge waived the court costs. However, Miller got a nasty surprise in the mail a few days later when he got a letter stating that an additional $111 in fees had been tacked onto his fine after the fact. That will teach him about exercising his rights!

Of course cops’ zeal for turning innocent people into criminals extends far beyond Cop Block. We see it in their everyday ticket quota chasing activities, but also in the extraordinary lengths they go to in order to entrap people. Take the case of Eric McDavid, a 26-year-old nonviolent activist who was set up in a bomb plot by a paid female FBI informant who pretended to be romantically interested in him. McDavid was recently released after serving 9 years of a 20 year sentence after people committed to his cause uncovered that the FBI had illegally withheld 2,500 pages of exonerating evidence. It was also revealed that the FBI had built up a network of 15,000 informants targeting environmental activists.  Just as the FBI has created every Islamic terror plot it has “busted”, it seems the FBI scripts ecoterrorism plays that they then move unsuspecting activists into like chess pieces.

British law enforcement took this tactic to another level with undercover police officers fraudulently entering into relationships with at least 10 women that lasted as long as 9 years, even fathering children with some, all in the attempt to gather intelligence on environmental groups. What does it say about law enforcement that this kind of disgustingly violating, deeply psychopathic behavior is not a case of rogue cops acting outside of policy, but was planned, reported activity, sanctioned at all levels?

Police revel in puerile descriptions of themselves as “wolf-hunters” protecting the unsuspecting sheep, but the truth is that many in their ranks are depraved psychological-defectives who disguise themselves as normal people so that they can prey on the vulnerable.

Ademo already responded about the “in it for the money” claims above, but even if he made a million dollars from Cop Block, exactly why is it that CACB is so concerned about it? Do they think web domains and hosting, cameras, editing software and equipment, FOIA requests, legal expenses from false arrests, etc., don’t have costs associated with them, or that the other media sources they consume are somehow not ad-supported?

Cops have the endless resources of the state to tap into, professional spokespersons and unions working to shape public opinion, and an often biased and sympathetic media that neglects to push for real answers in cases of police abuse and overreach. Police watchdog groups like Cop Block are going up against a machine, and we do it at our own personal expense, and on our own time.

Which brings me to the point about Cop Blockers “quitting with no reason.” It’s the nature of social movements that some folks stay, some folks leave, and others take their place. It’s not really that serious. I guess we should be flattered that the CACB folks are so attuned to how active individual Cop Blockers are or are not, but please, no wellness checks.

Lastly, Ademo has been transparent about how money comes into Cop Block, where it goes, and all financial transactions are done on a voluntary basis—the complete opposite of how things work with police. In fact, law enforcement is a profession whose very existence is predicated upon theft in the form of fines, fees, and civil asset forfeiture.

While rape kits sit untested on shelves across the country for years and more than 1 in 3  homicides go unsolved, police departments are endlessly innovative when it comes to revenue-generating activities. You see them having “most arrests” contests, driving tractor trailers (at what expense?!) and posing as homeless people to ticket drivers for using their cell phones, and relentlessly harassing homeowners for petty items like missing window screens. The reality is that Law enforcement is the ultimate criminal financial enterprise, bar none. It is so adept at stealing from the American public that its take from civil asset forfeiture surpassed the total losses from burglary in 2014. The Federal civil asset forfeiture take that year was $4.5 billion compared to the $3.9 billion in property estimated to have been stolen in burglaries. The total amount stolen by law enforcement is even higher since that $4.5 billion does not include assets seized at the state and local level.

Some states have finally recognized civil asset forfeiture for the abusive practice that it is and passed legislation to curb it.  However, even though New Mexico now requires a criminal conviction before assets can be seized, crooked police departments and city officials are openly defying the law! The Institute for Justice recently filed a lawsuit to force them to obey the law, apparently a novel concept in law enforcement.

CACB Should Learn to ‘Like” the Taste of Sour Grapes

“The Facebook page currently has over 1.5 million “likes”, and I say likes like that because there are some questions surrounding that number. Their page numbers took a huge jump in a little less than a month; generally that means the page owner paid an outside company to load up the page with a bunch of fake likes. The other thing is, we do not know how many of those likes are people that don’t really like Cop Block, but want to keep an eye on what they post.”

I remember when Cop Block and all of the other police watchdog pages I follow saw a tremendous jump in page likes last year. It was over the summer of 2014, not just one month, which, as I recall, was a bit of a moment for public attention to police brutality. The more people became aware and outraged over incidents of police violence and abuse, the more they flocked to pages like Cop Block.

Of course it’s true that some of the followers are trolls who want to harass and keep tabs on Cop Block’s every move, but the same is true for CACB, other cop apologist pages, and official police pages. I follow at least 20 such pages myself (does that mean all of CACB’s 60k followers are actually Cop Block fans?). It’s hilariously self-aggrandizing that CACB would posit that most of Cop Block’s audience is people who seek to undermine its mission, and therefore that haters are the only thing keeping it alive. That’s some prime topkek right there.