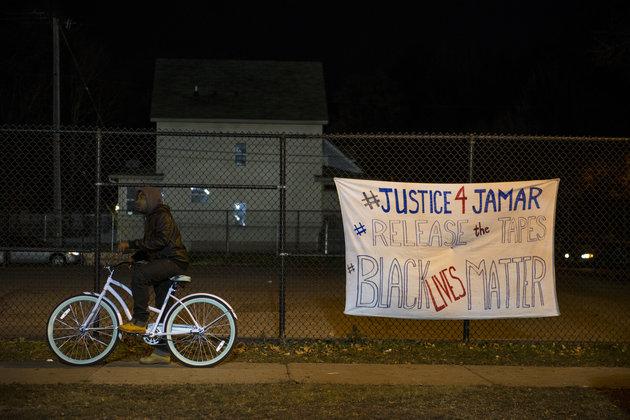 Multiple DOJ Attorney’s will be arriving in Minneapolis today to probe the shooting of Jamar Clark. Their main focus will be determining if the videos of the early morning shooting, that ended with a bullet – fired by a MPLS police officer – in Clark’s head, should be released. The videos collected from cell phones, the ambulance camera, mobile police cameras and housing authority cameras have yet to be released based on the belief that it will compromise the investigation.

Mark Dayton, the Governor of Minnesota, met with the Clark family Saturday and asked them to meet with the DOJ attorneys and discuss releasing the tapes. The pressure applied maintains attention on the situation and it no longer can be ignored. The Governor further stated in a release that:

I will urge that the tapes be provided to the family and released to the public, as soon as doing so will not jeopardize the Department of Justice’s investigation, I will also urge the Department of Justice lawyers and the U.S. Attorney to investigate any matters, which occurred in Minneapolis during the past week that may have violated the civil rights of any Minnesota citizens.

Regardless of below freezing temperatures, the protesters encampment in front of the 4th precinct remains occupied. They have been there for a week now and will remain until the tapes are released. Their commit to justice and their encampment becomes more historic with each passing night.

Monday night they shut down HWY 94 for 2 hours, 51 people were arrested including 8 juveniles. Wednesday evening the encampment was attacked by police in riot gear, they made an attempt to tear down the encampment. Police began spraying mace and jabbing at protesters with batons. A skirmish ensued and officers dressed like soldiers roamed the streets. Some people labeled as outside agitators by organizers and protesters, threw bricks and bottles at the police and damaged multiple police vehicles. Friday two people were arrested for spray painting an expletive ridden phrase on the wall as well as Jamar Clark’s name. An SUV rammed the chain link fence the same night. It is unknown if anyone has been arrested for the incident.

the primary goal of the protests is to see the officers involved in the death of Clark prosecuted based on statements of people who say they saw the shooting. He said the officers should face charges and “go through the same procedures that we do. We think they’re guilty, but let the court decide.”

Police Chief Janeé Harteau stands by her officers and commends them for their professional conduct and protecting public safety and freedom of speech.

“I’ve been in law enforcement for 29 years, and I’ve never seen more professionalism from police officers than has been displayed in Minneapolis at the 4th Precinct this week. I fully support the actions of my officers. Any investigation, federal, state, or county into my officers’ conduct at the 4th Precinct during this time will only confirm the strength of the work my officers did protecting both public safety and the freedom of speech.

Her idea of professional conduct, protection of public safety and free speech are skewed to say the least. This may be a direct result from her 29 year career working for one of the most violent and corrupt institutions ever to be established. Regardless she is leaving out the fact that the official MPLS police department twitter lied about protesters using mace on police during Wednesday’s protest.

Despite harassment, arrests and being attacked by police the protesters encampment in front of the 4th precinct remains. Their determination and resolve are perfect examples of a community brought together through tragedy and remaining steadfast in their determination for answers. Their actions and agitation have turned the lights of transparency on the MPLS police department.

Now with the DOJ coming to town there’s a small ray of hope that transparency might be possible. Though it’s still cops investigating cops, there are times where the Federal Government enjoys beating up on State governments as much as all governments like to control anyone.

Nevertheless, the lessons to be learned here are to a) ALWAYS FILM THE POLICE and b) publish the video to the internet yourself. Don’t rely on the government, or the government’s police, to bring any wrongdoings of their own to light themselves. The conversation here is currently focused on whether the video should, or should not be released, if it had been livestreamed using apps – like Cell 411 – we’d be talking about the wrongful (or legitimate) use of force by Ringgenberg and/or Schwarze.