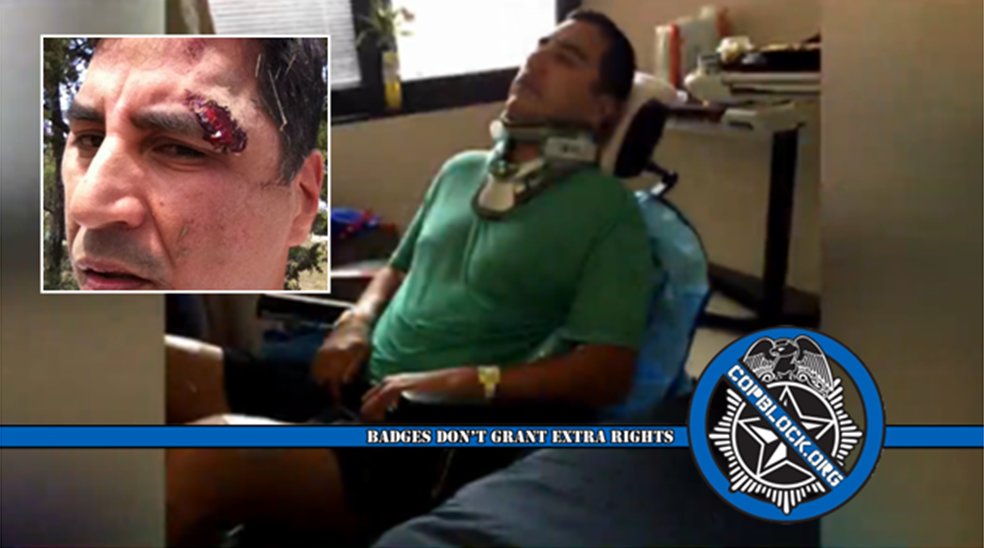 Family say a man beaten by three officers with the San Antonio police department last year is now paralyzed from the chest down after surgeons experienced complications attempting to repair his spine.

Forty-three-year-old Roger Carlos was in the 10600 block of Westover Hills Blvd. in May, 2014 taking photos of a building he had recently purchased that was to be his wife’s new medical practice.

According to police, Carlos was approached by three officers at around 2:30 p.m: two SAPD SWAT-team members identified as Carlos Chavez and Virgilo Gonzalez, and one undercover drug task force officer whose identity has not been released.

The officers were pursuing a suspect nearby who was wanted on felony drug and weapons charges after he had fled from the cops along the Highway 151 access road. He had abandoned his car in a parking lot of a restaurant approximately a few hundred feet away from where Carlos was standing.

The cops reportedly mistook Carlos – who has no criminal record and was simply taking pictures with his phone – for their suspect, and struck him about 50 times even though he was not fighting back and complied with their orders, he says.

“All three of them started beating me on the head,” Carlos said. “It was unbelievable. I couldn’t believe it was happening to me. These guys, they beat me like a bunch of thugs.”

After being handcuffed and explaining to officers that he owned the property, Carlos says he was approached by a fourth officer who said the real suspect was in custody close by.

The beating left Carlos with a brain aneurysm, broken teeth, and injuries to his face, neck, and back causing lose of feeling and movement. He was forced to undergo multiple surgeries to his spine to relieve pain and pressure from herniated discs costing 10s of thousands of dollars.

Family said on Friday that as a result of complications during surgery on November 3 at a San Antonio area hospital, a piece of bone broke off and compressed against his spinal cord causing paralysis from his chest down.

“Its hard to see it, its hard to believe that something like this occurred over a mistaken identity,” Carlos’ wife Ronnie said. “That is the hardest thing that has happened to us.”

Following an internal affairs investigation in October of last year, the three officers that brutalized Carlos were originally given 15-day suspensions – but those “sanctions” were latter reduced to suspensions of only five days by then-police-chief William McManus.

Adding insult to injury, instead of serving their actual suspensions, the cops were allowed to use their accrued leave time to take a paid vacation. They did not receive any additional disciplinary action for their brutality.

Carlos may never walk again and is now even loosing feeling in his arms and wrists. Family say doctors are concerned that the complications could also lead to the father of three having trouble breathing.

“People need to stand up and say something about it. Just because a police officer has a right to do something like that based on a law that protects them, it’s not right,” Ronnie Carlos said. “Carelessness, just carelessness of these three officers, not realizing that they ruined his life.”

The family has retained an attorney and is preparing to take legal action against the San Antonio police department. You can help contribute their medical expense fund HERE.