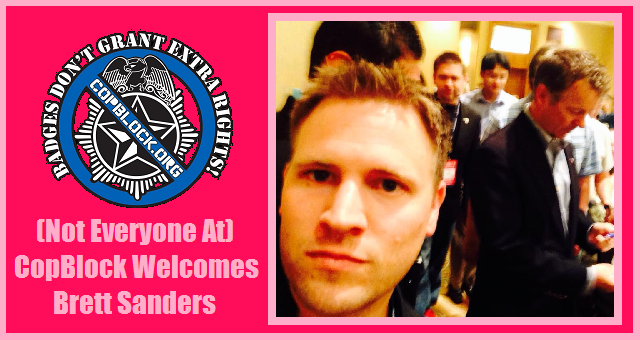 Today I learned that Brett Sanders would be joining the contributors for CopBlock.org. My initial feeling was of disappointment and disgust, since Brett has made some statements in the past that were very antithetical to what I considered to be the agreed upon position of the website that the unjustified murder of citizens by police is not okay. Although we are a varied group of individuals with a number of different ideas on how the police state problem should be addressed, I was pretty certain that besides ‘Badges Don’t Grant Extra Rights’, we all agreed that wanton murder of individuals by law enforcement was pretty much something we mutually frowned upon. Yet with Brett comes a new era of police criticism in which ‘Badges Plus Corporate Asset Protection Grants Extra Rights’. Let me explain.

Back in August, Christian Taylor was killed by Arlington, Texas police during an incident in a car lot during which Taylor had become mentally unstable and was causing some havoc and property damage. Despite initial reports that the unarmed Christian was a threat to officers, it did not take long to realize that the cops lied and that Taylor had been murdered without any reasonable justification.

However while scrolling through my Facebook feed I came across some statements from Brett Sanders that claimed the police killing was justified under the premise of ‘property rights’, as Taylor had damaged vehicles at the car lot during his mental breakdown. I called him out on the flimsy premise of his argument, mostly in hopes that he would retract his immoral and ignorant statements, but Brett chose to stand his ground. In a discussion shortly thereafter with members of a Facebook group comprised of local CopBlock chapter admins, I explained why I was recommending that we no longer share his stories or videos at our website. Brett, being the obviously rational and compassionate guy he is, had this to say…

We continued to argue about his flimsy justification and the underlying assumptions it contained, while I also took the time to tell Brett what a piece of shit he is. By this time it was pretty clear that Taylor had been killed without cause, and was not on a criminal rampage but a mental breakdown, however Brett still felt that Taylor committed his acts with criminal purpose and a knowledge of reasonable expectations that he could be shot. Sanders just didn’t want to face up to his erroneous bullshit and instead tried hiding it behind buzzwords that would make Rockwell/Cantwell swell with pride before the adoration of their Ayn Randbot followers.

Guys like Sanders are why I long ago stopped associating with mainstream libertarianism. People like him stretch the basic principles of liberty wherever they see fit in order to justify their own political agendas and bigotries. They become a hive of buzzwords whose consistency breaks down in the quagmire of their own short-sighted dogmas. For people like this, there is no spirit of liberty, only a defined set of absolute truths they can use to judge everyone and everything else. It is a gross form of conservativism that parades itself as the One True Way to individual liberty and freedom. For me libertarianism was about achieving the goal of liberty, not writing the rule book for it. But as I saw fools like Sanders replacing the basic moral human truths with canonized Truth, I gave a shifty look and slowly backed away.

Christian Taylor broke into a car lot and fucked some merchandise up during an unfortunate incident. To put that transgression against property in the same category as an individual defending their home and livelihood is more than just a little stretch. First of all,  because of the way auto-manufacturers and sellers operate, new car businesses are always incorporated. Which means that they are a fictitious entity created by the state in order to protect monopolies from effects of the free market. So this ‘individual’ whose property was endangered was not a person, but a government-based entity. Apparently Brett believes that the fictions of the state have a greater right to property protection than citizens have to not being killed by police. Despite the fact that the vehicles were insured by the same corporate insurance agencies that are usually umbrella companies of the same banking elite that issue bogus currency on behalf of the government who employs badged murderers, Sanders can still somehow justify the death of a human being on the thin premise of property rights. This is somewhat akin to how some unsavory Christians manage to incite genocidal rage against homosexuals, pagans, etc., based on a single line from a bible that has been translated several times over thousands of years, despite the fact that their entire religion is supposedly based on a guy name the Prince of Peace.

So now Brett Sanders will be contributing to CopBlock. If nothing else this shows Ademo’s commitment to diversity, and illustrates that no two CopBlockers are interchangeable. Even though I am personally disgusted to be joined by a greasy guy like Sanders, I think it does hold with our overall commitment to different opinions, while still putting me in league with a guy who justifies killer cops with a Sunday School understanding of liberty, and through a misapplication of even its most basic concepts. So keep your eyes out. Brett is likely to say stupid things again in the future and if I am aware of them I will be sure to point out his future incidents of hypocrisy and obvious bullshit. Welcome aboard, Brett, from everyone but me.