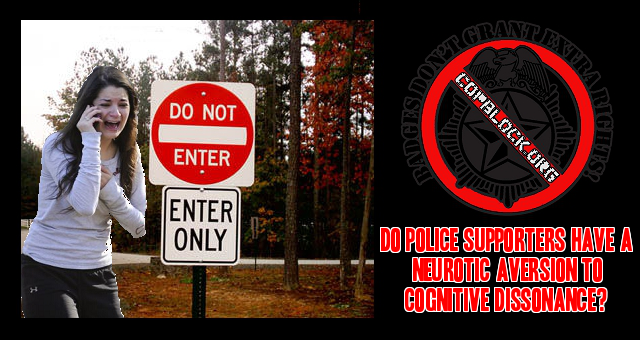 One of the many varied interests I have is in the world of the paranormal and other anomalies. Not necessarily because I believe those phenomena to be ‘real’, but because I find the human mind to be a fascinating thing that produces innumerable kinds of symbols that themselves are clues to our humanity and the complexity that lies within. There are three typical responses to the paranormal.

The latter of these tend to call themselves ‘Skeptics‘ even though their use of that word is a perversion of both the spirit and definition of skepticism. So the other day I was reading THIS ARTICLE by Michael Prescott about the psychological tendencies of ‘Skeptics’ when I realized that the exact same psychological flaws seem to be evident among the most rabid police supporters. I highly recommend that you read that entire article and just replace every instance of ‘Skeptics’ with ‘police supporter’. I will reprint a few key passages here.

This accounts for the tendency of Skeptics to come up with a quick-and-dirty explanation of any troubling phenomenon. Because cognitive dissonance is so painful for Skeptics, they often do not even read the cases closely — or if they do read them, they don’t absorb or retain what they’re reading. It’s a defense mechanism. Rather than engage with the material, which would make them deeply uncomfortable, they skim it, find the first detail they can “debunk,” and declare the case closed. They can safely forget it. Dissonance has been resolved, and order is restored. (Matt Rouge, a commenter here, calls this “the fallacy of the glancing blow.”)

Of course, this type of psychology is not limited to Skeptics. It can be found in many people, including some who are very successful. More than a few high-ranking politicians and business leaders seem to have this mindset. It is, in some ways, socially advantageous. A person who permits himself no doubts can inspire others to follow him. “He must know what he’s doing,” people say. “He’s always so sure of himself.” Since most people are beset by doubts, they admire someone who seems to have none.

Insecure people, in general, are likely to idolize those who seem unafflicted by inner conflicts. They don’t realize that the appearance is a mirage, and that their heroes are merely exceptionally good at papering over their own doubts, concealing them even from themselves.

It appears that all of the worst qualities describing Skeptics can be found also in police supporters. What do the two groups share in common that might explain these parallels?

Paranormal events are outside of the normal, just as criticism of police is outside of the normal. In this case the ‘normal’ is a proscribed reality in which deviation from the official proclamations of authorities and experts is deemed heresy. Besides normalcy there is also an irrational attachment to experts and authoritarians, which itself is likely a product of the existential angst caused by the uncertainty of our being, and an unconscious attempt to cover it up with a fanatical belief in the ideological positions with the most consensus and social momentum.

The problem with reliance on experts, authorities and majority consensus is that the world is an ever-changing landscape of new information, paradigms and zeitgeists. Nothing is permanent. Knowledge, the status quo and society are always changing and evolving as they absorb and expel information and experience. A mind that has set itself to permanently believe any single ‘truth’ will always eventually be shattered when reality evolves beyond their worldview. The only way to be certain to be wrong is to continue believing the same things in an evolving world that does not accommodate such permanence or certainty.

Supporters of police and the state do just that. They attempt to build a model of reality based on a single snapshot of their mental state in time. They make a blueprint of the future based on their (often misinformed and highly biased) past and their assumption that said past is an eternal immutable truth from which we can predict the future. As more information negating their antiquated and dying models comes to light, their neurotic aversion to cognitive dissonance makes shutting themselves off from any information that does not confirm their biases a last resort for avoiding the dreadful mental disturbance they would face if they were forced to admit that they might be wrong.

It would have been almost physically painful for [the police supporter] to pay attention to a video that so directly challenged his beliefs. Instead he acted like a child who claps his hands over his ears and sings “La la la!” rather than hear upsetting words.

I might as well pre-emptively address the assertions that are sure to follow. Yes, to some degree, this all also applies to me. It applies to every living, thinking, believing human being. If you think it does not apply to you, then it definitely does, and in enormous disproportionate quantities.