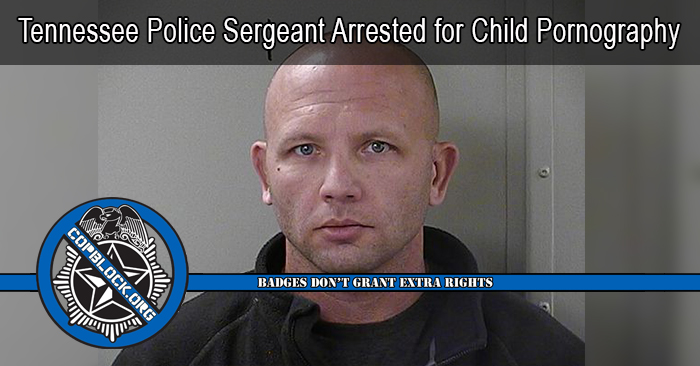 MURFREESBORO, Tenn. – The Murfreesboro Police Department is back on CopBlock this week after one of their police sergeants, Kevin Dunn, a 17 -year veteran of the force, was arrested as a result of a child pornography investigation by the TBI.  Special agents from the Tennessee Bureau of Investigation arrested Dunn on Monday and he was charged with five counts of sexual exploitation of a minor. The Nashville’s News Channel 2 reports:

Kevin Dunn now faces five counts of aggravated sexual exploitation of a minor, according to the Tennessee Bureau of Investigation.

Agents reportedly developed information that led them to Dunn as someone who had distributed images of consistent with child pornography.

The 42-year-old was arrested Monday and booked into the Rutherford County jail on $750,000 bond.

According to the Murfreesboro Police Department, Dunn has been decommissioned and placed on paid administrative leave until further notice.

He began working for the department in November 1998. He was promoted to sergeant in 2011.

Apparently aware of the already fragile public trust, the Murfreesboro Police posted on their facebook page a few days ago “letters from the community” about how “Murfreesboro Police Officers are # 1” and that “they are the good guys” while simultaneously deleting comments from people about their militarized SWAT raids on the community.

The Murfreesboro Police can claim to be “the good guys” all they want but actions speak louder than words.