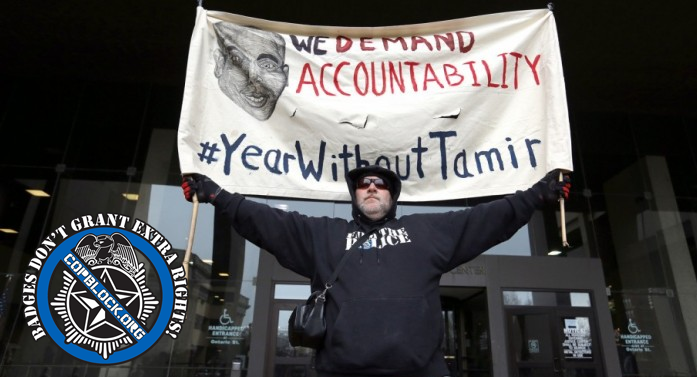 Over this past weekend, I have been attending Tamir Rice Protests, Vigils, and meetings focused on the police brutality problem in Cleveland. Yesterday a group of protesters and Tamir’s family gathered outside the Justice Center downtown. The demand is that prosecutor McGinty step aside from this case. He has over the past year, proven he is incapable of prosecuting law enforcement. He will stop at nothing to prosecute you, unless you are a cop.

At the meeting on Saturday, we were joined by Samaria Rice, Tamir’s mother, and her lawyer Subodh Chandra. Chandra went over all the details of the fight he has led against the prosecutor’s office who refuses to release evidence pertinent to the case. He will not even answer his inquiries. They have not followed standard procedures and have gone as far as to berate the Rice family publicly.  He has leaked report by his friends who he calls experts, a move Chandra calls, “Improper for a lawyer to do,” but since it’s not against the law, he gets away with it. Since he works for the state, he will not be held accountable for it.

McGinty has attacked the Rice family and their attorneys publicly. He claims to not have heard about Judge Adrian’s ruling that criminal charges should be filed against the officers. A letter was sent to his office about it to which of course, he did not respond to. His sworn testimony in the Brelo case is in direct contrast to his views on the Tamir Rice case. In Brelo’s case, he testified that “An officer should assess the situation, not rush in and start firing.” Isn’t that what he should be saying about this case?

This Prosecutor has been sabotaging this case’s potential for prosecution. If a prosecutor can get a grand jury to indict a ham sandwich, why have officers Loehmann and Garmback not been charged yet?

Watch more from the press conference at GreaterClevelandCopBlock on Bambuser

It has been one year to the day that Tamir Rice was murdered while playing in a playground. Timothy has treated this case like he is a first year law student, not a seasoned prosecutor. The entire Cleveland justice system seems to be trying to sweep this case under the rug since the beginning. The judges in Cleveland are backing the prosecutors. The prosecutors are backing the cops, and the cops back each other. It is a perfect system of corruption in Cleveland, and no one is doing anything about it.

Case after case gets settled in other parts of the country. It didn’t take a year to charge Micheal Slegr with the murder of Walter Scott. It did not take a year to charge the murderers of Freddie Grey in Baltimore. Why is justice taking so long in Cleveland? Is it because the people of Cleveland are not being aggressive enough? I have been to a great many protests in Cleveland, and the main difference is the extremes to which the people of other cities are willing to go to get the justice they deserve. I have seen how the Cleveland police laugh at the protesters here. They think it is a joke. Maybe if we turn Cleveland into Baltimore, we would get the justice we deserve!

But that would advocate a violent revolution and that ain’t Cleveland. It’s not what the Rice family wants either. They call for people to be peaceful in Cleveland. Besides, if it ain’t a football or basketball game, you can’t get Clevelanders to give a shit enough to get off the couch. No one will listen to you if you whisper. What we will continue to press for is that Tim McGinty step down as prosecutor. He is obviously on the police payroll. He is not for the people of Cleveland or Ohio, he is for the cops and himself.

A Year Without Tamir