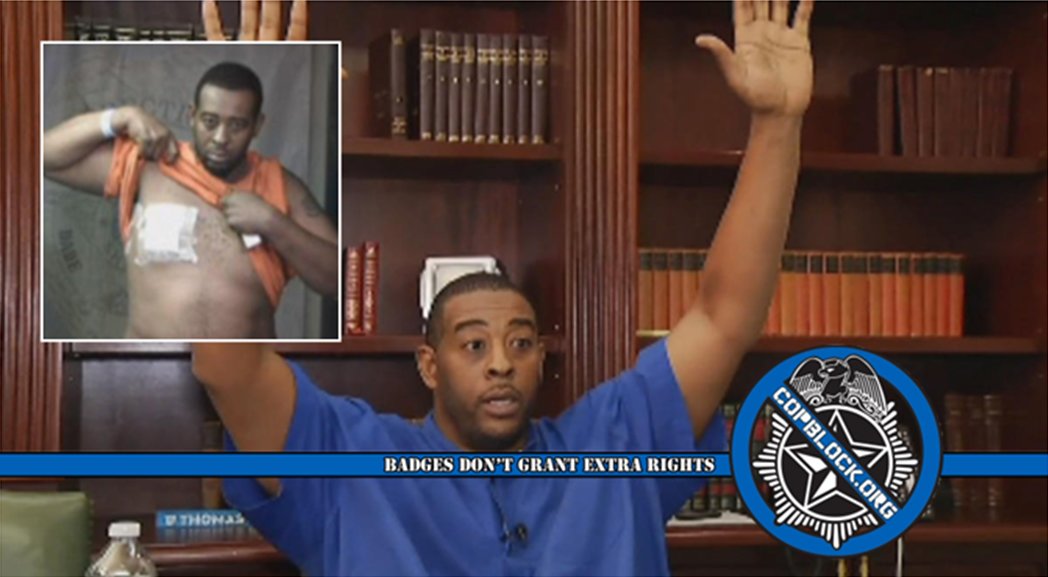 A man shot by a Florida police officer says he was unarmed and had his hands up when the overzealous cop pulled the trigger.

Thirty-six-year-old Michael Gavins was being arrested for a drug charge after he was pulled over by two South Miami cops at a gas station on U.S. Hwy 1 near the University of Miami for an alleged traffic violation.

According to police, the officers approached the vehicle at around 5 p.m. on Nov. 15 when they saw Gavins was in possession of marijuana and ordered him out of his car.

The cops maintain that as he was being escorted to a patrol car, Gavins made an “overt movement” and ignored an officer’s commands – which prompted one of them to fire his weapon.

That “overt movement” police reports say, was Gavins “reaching into the front of his waistband.”

The cops say one of the officers, identified as Aryo Rezaie, “gave Gavins a verbal command to take his hands out but with negative results,” and “[the suspect] began to act in a nervous manner… refused once again and began to walk towards Officer Rezaie.”

Gavins says those claims are ridiculous and asserts that he was cooperating with both officers and following their commands when one of them took out his firearm and shot him in the chest for no reason.

“I was doing everything I [could.] I had my hands up,” Gavins said. “I was shocked when he shot me because I wasn’t a threat.”

“[I said,] ‘You can check me. You can check the car, you can do whatever you want. Please don’t shoot me,'” Gavins added. “[The officer] paused [for] maybe 30 seconds and the next thing I hear [is] ‘boom.’ If the overt action is putting my hands up, telling him I am not a threat, then I don’t know.”

Police say Rezaie was not injured in the incident, and that a plastic bag holding several smaller bags of marijuana was taken from the scene. Gavins was not found in possession of any weapons.

He was charged with possessing marijuana with an intent to distribute and resisting arrest without violence, and was hospitalized and released the next day in stable condition.

Gavins appeared in Miami-Dade bond court before Judge Mindy Glazer, and was appointed a public defender who says the incident exemplifies “outrageous conduct by law enforcement.”

“We have another instance of an unarmed black male being fired upon by law enforcement for no good reason,” Attorney Paul Layne said. “Mr. Gavins’ civil rights has been violated and my job here… is to make sure that the light is shined on the story.”

Officer Rezaie was placed on a three-day administrative leave following the shooting and has now returned to full duty, police say. An internal investigation into the matter has been launched.

“I just thank God that it wasn’t worse than it is. It could have been worse,” Gavins said. “I’m just glad to be here, be alive, you know? I could be gone right now.”