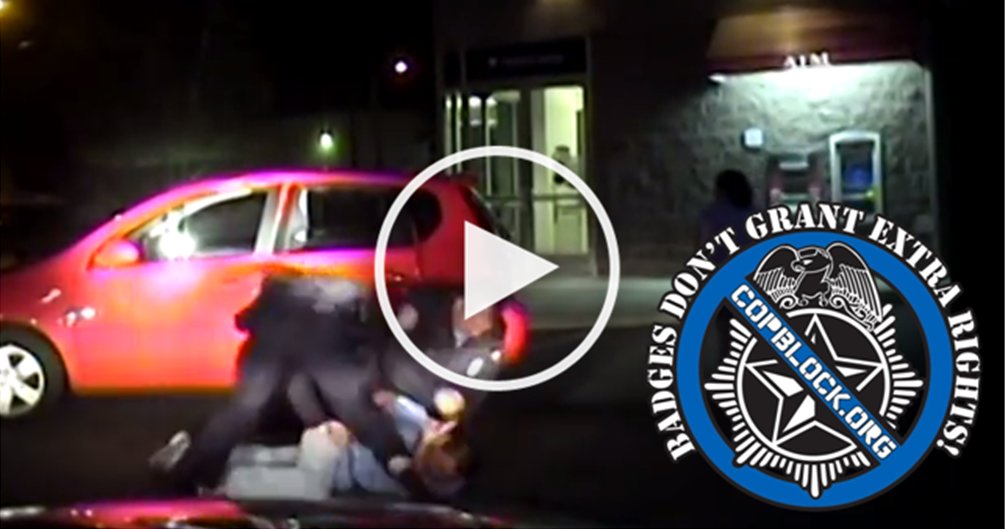 Officers with the Seattle police department kicked and punched a man 17 times in an incident caught on one of the officers dash-cam video recorders. That footage was released on Tuesday.

According to a civil rights lawsuit settled last year, three officers had initially responded to a call on Nov. 4, 2010, outside a South Seattle Viking Bank at 5701 First Ave South.

Filed by Eulogia Morales Cayetano in King County Superior Court, the lawsuit said that she, her husband, Rufino Ocampo Estrada, their son Emmanuel Ocampo Estrada, and the couple’s nephew Magdaleno were working in the evening at the bank under a contract to clean the premises.

After finishing their assignments, the son and Magdaleno went to a tavern across the street where the bartender accused them of trying to bring in beer from outside and called police.

The lawsuit said that after the men left, they were picked up by Rufino Ocampo Estrada in his car and brought to a parking lot adjacent to the bank where officers David Bauer, Brandon Eggers, and Lindsay Brown approached them and began yelling at them to keep their hands up.

The footage shows officer Eggers walk up to the vehicle and command Rufino Ocampo Estrada to “put your hands on the wheel.” Obviously confused about what the officer is saying, the driver attempts to comply by placing his hands at various different locations.

Eggers then turns his attention to the passenger in the back seat who also has trouble understanding him.

Eggers then begins speaking with the driver again. “What are you doing tonight?” he asks.

One of the officers then reaches in the window of the backseat, unlocks the door, removes the passenger and begins searching him. During the search, family members come out of the bank and are startled by what they see.

The footage shows Eulogia Morales Cayetano and others protesting the officers actions before one of the cops can be seen in the background pushing a family member up against the glass door of the bank.

Confusion continues to ensue with family members screaming and speaking in Spanish until Rufino Ocampo Estrada gets out of the drivers seat of the car to tend to his crying wife and condemn the officers actions.

The footage shows officer Eggers attempt to grab the man but is pushed away. He then follows Estrada around the vehicle, grabs him, and takes him to the ground with a leg sweep.

As Eggers wrestles with Estrada and tells him to “get your fucking hands out,” officer Bauer can be seen making his way to the commotion and delivering a kick to the man’s stomach before the two officers get on top of him and deliver at least 17 blows – most by Bauer to his head and face.

The lawsuit said that when Cayetano and Emmanuel Ocampo Estrada exited the bank after routinely setting the alarm, they were “shocked and confused by the police presence” focused on their family members – and were rushed at by officers Brown and Bauer who pushed them up against a wall.

Emmanuel Ocampo Estrada, the only member of the family that spoke English, repeatedly demanded to know why the police were there but he got no response, the suit said. Instead, Brown and Bauer began “beating, shoving, and grabbing” him and Cayetano as Rufino Ocampo Estrada ran to their aid.

Rufino Ocampo Estrada was initially charged with “first-degree criminal trespass and misdemeanor assault,” but those charges were later dismissed – as were “misdemeanor assault and obstructing a public officer” charges levied against Morales Cayetano.

Their son, Emmanuel Ocampo Estrada was also charged with “misdemeanor assault and obstructing a public officer,” but those charges were dismissed as well, at the request of prosecutors. He was later deported to Mexico however, the suit said.

The lawsuit was eventually settled in February 2014 for $25,000, with no request for evidence from the plaintiffs.

President of the Seattle Police Officers’ Guild, Ron Smith said that the video showing the beatings, “doesn’t look pretty” – but despite police and FBI investigations of Bauer’s use of force, he faced no disciplinary action or charges as a result of the incident.

Federal prosecutors claimed there was “insufficient evidence to establish a prosecutable violation of the federal criminal civil rights statutes,” and noted that their investigation was challenging because some of the action took place behind the family’s vehicle making it tough to see what transpired.

King County prosecutors agreed, and said this week that “the force inflicted on the driver by Officer Bauer in full view of the in-car video stopped when the suspect complied with [officer commands]” – and added that because the use of force happened while the suspect “was resisting arrest,” no charges could be filed against Bauer.