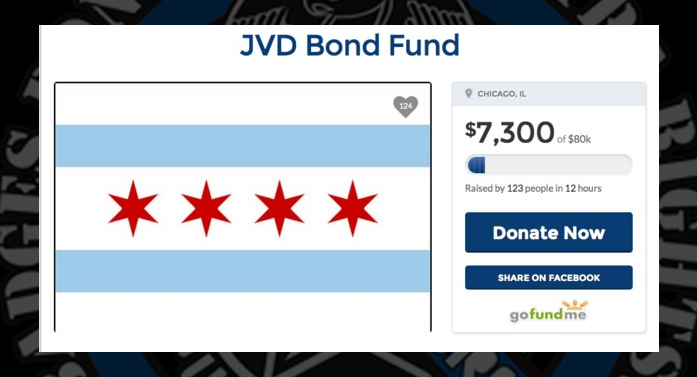 The GoFundMe page, titled JVD Bond Fund received over $10,000 in donations from fewer than 200 donors before being removed.

Kelsea Little, a spokeswoman for the fundraising website, said it was the decision of GoFundMe to remove the fundraiser campaign for the killer cop.

“The campaign in question was removed for a violation of our terms and conditions,” Little said. “GoFundMe does not accept campaigns for the defense or support of anyone alleged to be involved in criminal activity. All donations will be automatically refunded to the donors.”

The creator of the fundraiser is apparently Van Dyke’s wife, Tiffany Van Dyke.

The campaign’s description said Van Dyke is a “highly decorated and respected officer” who is “fighting for his freedom and justice.”
Van Dyke is never mentioned directly, but details in the post paralleled the case of Laquan McDonald, for which Van Dyke was set to appear in court on Nov 24.”

My husband is having a bond hearing and if we do not raise the money he will be detained on 11/24/15,” the GoFundMe post said. “With the holidays approaching our husband and father needs to be home with his family.”

A similar fundraising effort for Freddie Gray’s killers was shut down by GoFundMe, a spokeswoman issued the following statement:”GoFundMe cannot be used to benefit those who are charged with serious violations of the law. The campaign clearly stated that the money raised would be used to assist the officers with their legal fees, which is a direct violation of GoFundMe’s terms.”