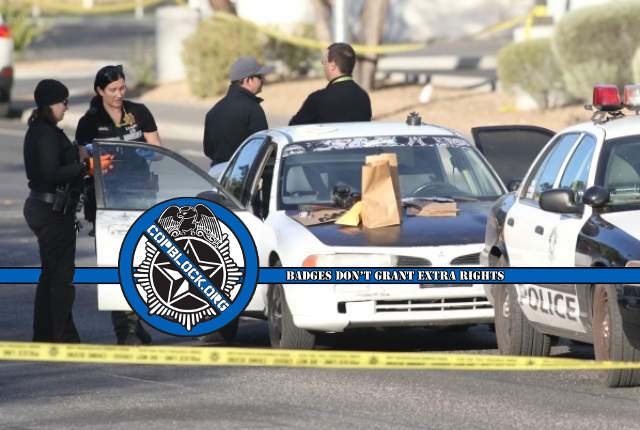 Overnight Monday (technically Tuesday morning), Las Vegas police registered their 12th officer involved shooting, guaranteeing that the LVMPD will average at least one shooting per month for 2015. The as yet unnamed person killed on Monday had fled from an attempted stop by a marked patrol car around 2:00 AM after the plates on the vehicle came back as belonging to a different vehicle.

Although Metro says the original officer chose not to pursue them at that time, the same car was soon spotted by another patrol in a nearby neighborhood. The car (which has been identified as a stolen car by media sources) had been abandoned, but left in drive. So, although it was unoccupied it was moving down the road toward an intersection. The second officer blocked the vehicle with his own patrol car to stop it. At that point, the suspect was seen being escorted by a security guard  off the property of a nearby apartment complex.

According to Metro (the video of their spokesperson’s official statement is embedded below), the suspect refused to follow orders, kept his hands behind his back, tried to run again, was not affected when tased, and eventually reached for a gun he presumably was concealing in his back waistband area. That resulted in the three officers at the scene firing at and killing the suspect. Reportedly, a gun was later found at the scene where the shooting took place.

However, since the shooting I have received audio of witness interviews recorded at the location of the shooting, which contradict the “official” story by the LVMPD. One of the inconsistencies include witnesses’ contention that the man was not actually armed at the time of the shooting. According to these witnesses, the police originally claimed that they found the gun they say he was armed with inside a nearby garbage can. (The original report was that a gun was found “in the area,” which is potentially consistent with that claim.) If that were true, the man who was killed obviously could not have been pulling a gun out from behind his waist.

It’s also stated that there is a video of the shooting. The existence of such a video has not been mentioned (or ruled out) by the police at this point, although some LVMPD officers are wearing bodycams currently. So, there is a possibility that that is actually the case. However, the person providing the audio appears to claim to have a copy of that video or, at the very least to have seen it, although that video was not provided and they would not have access to bodycam footage, which means it would have to be from another source.

That audio, which also has been embedded below, was received from a source whose identity I do know, but who has requested to remain anonymous. That is due to previous violent encounters they have had with the police, including those employed by the Las Vegas Metropolitan Police Department, in retaliation for filming them. That person also stated that they live in the area of the shooting. (In one bit of a disclaimer, I will say that the person who submitted this audio does not in fact “run Cop Block” or even in any direct way contribute to this site, contrary to what he states at the beginning of the video. I point that out simply for the sake of clarification.)

Included with the link to the audio was this description:

“This message is for Kelly Patterson. RE: officer involved shooting 11/24/15 2am at Cambridge and Katie. The media has brushed this under the rug. What LAZY journalism.

In fact, several people said they found a gun in a trash can nearby. This was another Metro murder and the LVRJ and all the other Las Vegas media sweeping another murder by Metro under the rug. Again.

Video footage was taken and it shows the officers running back from Maryland, seeing the man beyond the fence of the apt complex and ordering him to get down on the ground. The man shouting “I didn’t do anything” a couple times, a taser deployed and two more orders to get down before the cops opened fire. He then falls to the ground and dies.

Any journalist could have gotten the same testimony and video I attained. This is completely lazy journalism and another murder of an unarmed man in Las Vegas that the media refuses to accurately report on. Nobody at that park wanted to appear on camera. (neither do I BTW. I have enough problems with Metro. Keep me out of it) I recorded this conversation with the homeless people at the park who witnessed the murder.

Here is the audio…”

Metro has yet to release any follow up reports on the incident. Typically, they release the names of officers involved in shootings two days later, although the Thanksgiving holiday may delay that. This is also when they typically release updates to the original reports. It’s not at all unusual for their official story to change significantly from their initial narrative.

In fact, the LVMPD has a history of claiming suspects they shot were armed in some manor or actually using a weapon against them to justify their use of deadly force and then later admitting that was not the case. A few examples of this type of behavior are:

So, while the witness statements and possible existence of a video have yet to be corroborated, based on the history of the LVMPD and their penchant for evolving stories, I wouldn’t rule out another revision within the near future in this case, as well.