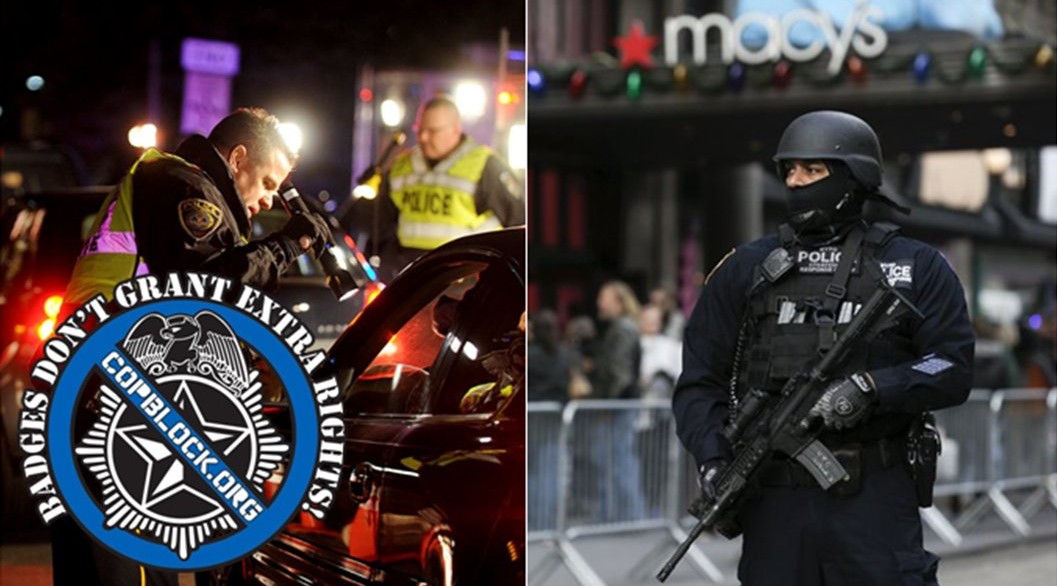 In a show of security theater that exemplifies the further acclimation of the public to the mounting draconian police presence in cities across the nation, the New York City police department deployed a record number of officers to patrol the 89th annual Macy’s Thanksgiving day parade on Thursday.

Clad in military style attire and peering off rooftops while pointing sniper rifles down at the crowds, the nearly 3,000 cops deployed bomb-sniffing dogs, radiation detectors, mobile cameras, and even helicopters amid security concerns following the Paris terrorist attacks earlier this month.

“There will be a lot of police presence,” NYPD chief James O’Neill said outlining the security detail prior to its deployment. “Things the public will see and, of course, things the public will not see. All of this will ensure that New York City has a safe and wonderful Thanksgiving, as we do every year.”

Some of the things the public didn’t see were the teams of plainclothes officers that mixed in with the crowds as the parade made its way down the two and a half mile Manhattan route between 9 a.m. and noon.

O’Neill said that the elite Emergency Service Unit would be on watch for suspicious activity as well – and for the first time – about 200 officers from the department’s new Critical Response Command, outfitted with heavy body armor and military style rifles, were deployed for the event.

Already, cops have arrested two people for allegedly flying an unmanned toy drone above the parade, and took at least 15 people into custody during police brutality protests the previous night.

Additionally, the New York state police are utilizing the high traffic holiday to add to their war chests by ramping up traffic enforcement across the state focused on speeding, impaired driving, underage drinking, and distracted driving.

Those measures include sobriety checkpoints, an underage drinker initiative, and “Operation Hang Up” – which targets drivers talking or texting on their cellphones with unmarked police cars.

Elsewhere around the country, state and local cops are jumping at the opportunity to generate extra revenue as well under the auspices of keeping holiday drivers safe with whats been dubbed, “The Interstate 40 Challenge.”

I-40 streches 2,500 miles through California, Arizona, New Mexico, Texas, Tennessee, Arkansas, Oklahoma, and North Carolina. Police are increasing their presence in each state from Wednesday, Nov. 25 to Sunday, Nov. 29.

Officials say drivers can expect to see a state trooper at least every 20 miles in each state – but don’t worry – residents have been assured that the operation isn’t just about writing tickets.

“We’re focusing on distracted driving, no seat belts and impaired driving, of course,” Arkansas state police Sgt. Chris Waters said. “Most people, when they see a trooper on the side of the interstate, they immediately check their speed, seat belt and that’s what we want to encourage people to do.”

A similar refrain has been repeated in other participating states. In Tennessee, highway patrol Col. Tracy Trott said that not only will I-40 see increased enforcement, but every additional major interstate in the state will as well.

“The THP cares about you and your family and wants you to have the best holiday season possible,” Trott said. “One of the most difficult jobs for our troopers is working fatal crashes, and then having to notify family of their loved one’s passing. I do not want another Tennessee family to feel that heartbreak.”

In Oklahoma, the emotionally evocative propaganda was repeated word for word.

“The OHP cares about you and your family and wants you to have the best holiday season possible,” highway patrol chief Ricky Adams said. “The OHP is going to do all that we can to protect you. One of the most difficult jobs for our troopers is working fatal crashes, and then having to notify family of their loved ones passing.  I do not want another Oklahoma family to feel that heartbreak.”

Hmm. Interesting… It appears that these cops have been collaborating about how best to sell their revenue generation scheme to the public.

In North Carolina, not only will state troopers be participating in “The Interstate 40 Challenge,” they have launched their own statewide initiative as well, called the “NC Interstate Challenge Campaign” – which is utilizing increased enforcement by state and local cops along I-74, I-95, I-73, I-26, I-77, and I-85.

Similar operations have also been deployed in states not within the I-40 corridor like Rhode Island, Michigan, Connecticut, Virgina, Missouri, West Virgina, and others.

This means that these holiday operations generate literally 100s of thousands of dollars in revenue for state governments every year.

At a time when most Americans are reflecting on what they are thankful for, it is clear what is on the mind of police officers: acclimating the pubic to their increased militaristic presence in places like New York City, and eating out the substance for their very own countrymen across the country.