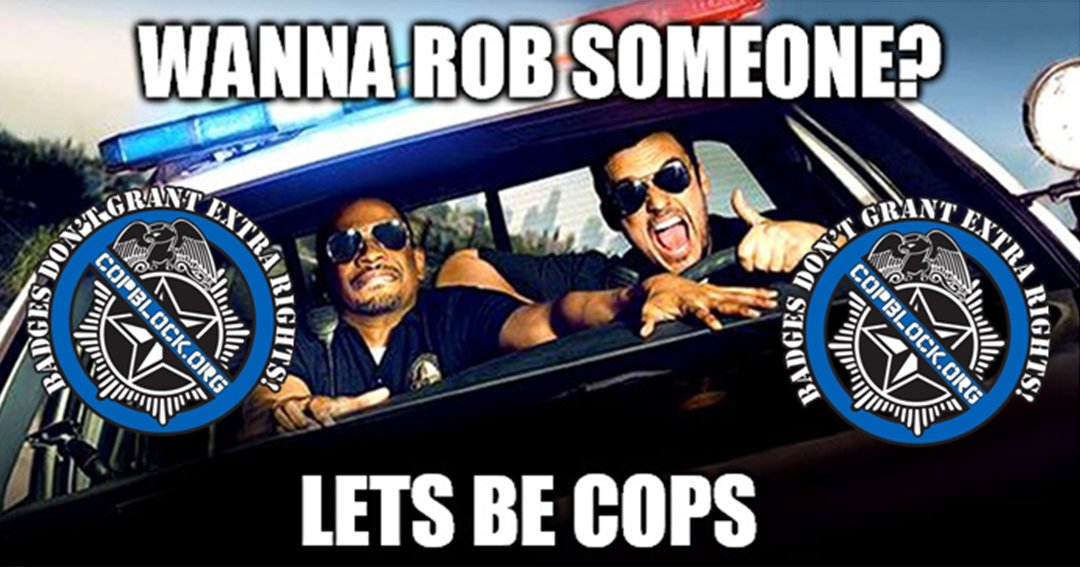 It has been said that they only difference between the state and the mafia is that the mafia at least has the decency to not to tell you it is robbing you for your own good.

This is exemplified by the great philosopher and economist Dr. Hans Hermann Hoppe who said, “an expropriating property protector is a contradiction in terms.”

How can an entity and by extension, its enforcers (police officers) claim the moral high ground when, in order to “protect you,” it must steal from you (via taxation) first?

Also, how can said enforcers justify actions that are fundamentally contradictory to any sort of civilized society like extorting people at gunpoint for victimless “crimes,” and then decry the actions of police “impersonators” who basically do the exact same thing?

One might think police aren’t astute enough to see the contradiction as a multitude of recent headlines about officers deriding the criminal actions of fake cops suggest – but I would offer that the truth of the matter is that “real cops” fully understand and are just mad they aren’t the ones getting to do the extorting.

In one of the most recent cases, after responding to a 911 call from a home in the 7300 block of Hague Road at around 8:30pm on Tuesday, the Indianapolis Metropolitan Police found a man that told them he and his sister had been tied up and robbed at gunpoint by three men posing as officers. The perpetrators took $2000.

So how are these “fake cops” doing anything that the real ones don’t participate in on a regular basis? Say the man had a warrant for exercising his own conscience by doing something his political overlords deemed “illegal,” like using or engaging in the voluntary trade of marijuana. How would the “real” cops respond?

Well, as we have seen all too often on this website, they would most likely amass a military style raiding team, break into the mans home, handcuff or zip-tie him and his family, and begin confiscating their possessions.

In the modern parlance of political double speak, this is known as “civil asset forfeiture” – a process under federal and state laws that allows police to seize and even sell any property they allege is involved in a crime – even if the owners are never charged or convicted with anything.

In the modern context, the practice goes back to war on drugs during the 1980s and was designed to enable cops to snatch money from drug kingpins like those charged under international or federal trafficking laws. According to a 2014 study by the Drug Policy Alliance however, seized property is now being taken from ordinary people who have never been charged with a crime 80 percent of the time.

Furthermore, the study gleamed “multiple instances of cash grabs by law enforcement being incentivized over deterring drug sales, wherein police wait until a drug sale concludes and then seize the cash proceeds of the sale rather than the drugs, as drugs must be destroyed and are of no monetary value to law enforcement.”

Adding to the outrage, according to the Institute of Justice, the U.S. Treasury and Justice departments deposited more than $5 billion into their asset forfeiture coffers during 2014. The FBI reports that during the same year, burglaries committed by common criminals netted a lose of just $3.5 billion from the citizenry.

This means police are now stealing more property from people than those they are supposed to protect us from – and don’t forget, 80 precent of those stolen from by cops in 2014 were never charged with anything.

We can also draw parallels in the criminal behavior of police when looking at common traffic enforcement. In another recent case of police impersonation, a Holly Springs, Mississippi man said he was pulled over by someone he thought was an officer adorn in a hat that simply read, “cop” – and was extorted at gunpoint.

“He said, ‘do you know why I pulled you over?’ I said ‘no sir, I don’t,'” the man recalled. “He pulled his gun out of the holster and pointed it to my face and said ‘I want your money.'”

The man said he then handed over all his cash, which was his disability check for the month, and the robber let him go. Sound familiar? It should, this is exactly what police officers do every day.

Lets say the man was pulled over by a “real” cop for not obeying edicts laid down by state or local tyrants saying that he owes them money for refusing to comply with arbitrary numbers posted on a traffic sign (speeding). He hasn’t hurt anyone. There is no party claiming he has done anything to them – but still, what would occur?

The real officer might not take out his firearm or explicitly say, “I want your money,” but the implications are all the same. He will extort the man for speeding despite no victim claiming any need for remuneration with an underlying threat of force.

Yes, the cop would not rob the man on the spot – that would be too explicit an activity to engage in while still maintaining the illusion that he is working on his behalf. Instead, the officer will write a ticket. If the man refuses to pay the ticket, eventually more men clad in blue costumes will come find him in order to extract their pound of flesh.

They will arrest the him, threaten him with jail time, and possibly even kill him if he puts up a fight and resists their violent expropriation. This is the reality of “traffic enforcement” – just like civil asset forfeiture or “taxation” – it is just theft by another name.

But without traffic laws, things would be chaos you might say. Well, some of the evidence seems to fly in the face of that assertion actually. You can check out the case against traffic laws HERE, but from a moral standpoint alone, consider that according to statistics compiled by Statistic Brain Research Institute – 112,000 people receive a speeding ticket every day in the U.S. at the average cost of $152 a piece.

Additionally, the institute concluded that only about 5 percent of drivers ticketed for speeding actually contest the fines in court. Is it any wonder they don’t?

By the time one invests the time and money fighting something in court, even if they win, it is the system that always prevails in the long run. Also keep in mind that the aforementioned stats relate only to speeding violations. (It appears governments don’t keep track of how many tickets they write.)

So how are police any different from cop impersonating highway robbers/home-invading burglars again? They are not – and anyone who claims adherence to a normative principle that asserts theft is immoral must concede this. Otherwise, you are just a hypocrite. Law is not a metric for morality.