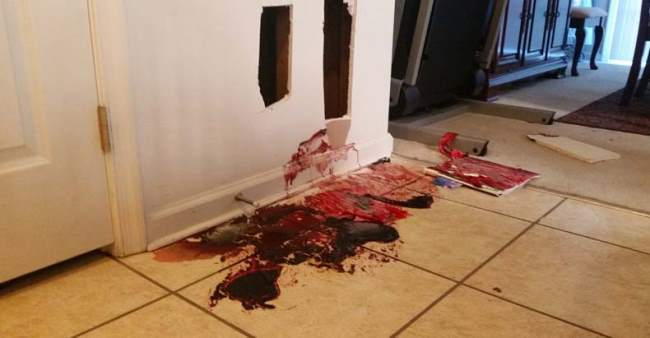 Mark Reedy was away from his home when the Delaware State police broke into his home – claiming to have a search warrant – and ended up shooting his dog. See video below:

The text below was written by DCMFOX and posted to LiveLeak.com:

Heavily militarized officers from the Delaware State Police and the Smyrna Police Department were allegedly executing a search warrant Friday night when they burst into the home of Mark Reedy.

The raid was captured on Reedy’s in-home security camera and the video was uploaded to Facebook over the weekend.

As the video begins, we can see the dog run up to the door barking and wagging his tail.

As the dog sees the shield and the gun he becomes startled and runs away. When the dog runs out of frame, it is clear that he posed no threat to the ten men in full body armor.

One cop can be heard saying, “less lethal up,” in a likely attempt to prevent his fellow officers from killing the innocent animal. However, at least one cowardly officer couldn’t wait to pull the trigger with real bullets, and a few seconds later a gunshot rings out and the dog is dead.

Reedy was not home at the time of the raid and when he returned, he found a horrific scene. Police had taken the body of his dog, left the blood puddle, and cut holes in the walls in a likely attempt to recover the bullet fragments that could be used against them in criminal proceedings.

Mark had his own words to say too and make the video below after the fact.

This is just another example of police abusing their powers and covering up their heartless actions. Feel free to contact the Delaware State Police or Smyrna Police Department to express your outrage at this horrendous actions.