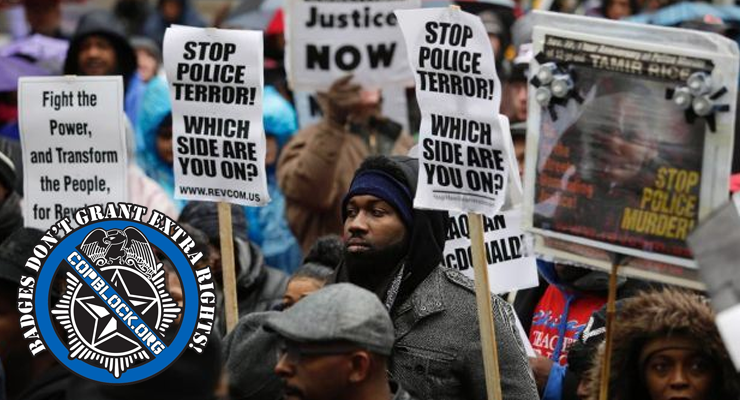 Last week the video of the Laquan McDonald shooting was finally released to the public, following 13 months of pressure from independent journalists and the community, and as the result of a judge’s order. The officer who shot McDonald 16 times, Jason Van Dyke, was indicted for first degree murder the same day that the video was released. Protests that police described as peaceful and without any reports of property damage began that same night and have continued since, prompting some to ask why?

I will pretend that these people really do want to understand why a community would protest after an officer has been an indicted for murder and the video of the incident released to the public, even though I know they really don’t accept any reason (or method) for protesting law enforcement as valid; What they really want to do is go lick their cop apologist wounds without the inconvenient distractions of people calling attention to systematic police terror. That’s what they do when they can’t whip out the good ol’ “Facebook law degree” meme because someone who has both a law degree and prosecutorial powers has finally used that knowledge to reject the “feared for my safety” excuse.

The short answer for why people are still protesting is that this indictment is merely the cop apologist’s vision of “accountability.” Treating widespread patterns of police abuse and murder as singular incidents remedied through the indictment of individual officers and restitution, at taxpayer expense, to surviving families, while refusing to address or even acknowledge the context and circumstances that allow these incidents to happen over and over again, is not accountability, reform, or justice. Occasionally the powers-that-be will reluctantly sacrifice a few of their uniformed rabid beasts to placate public opinion enough to allow the others to continue abusing citizens below the radar. This is precisely why communities need to be more active, not less, following an indictment or firing of an individual or handful of individual officers.

This article, Chicago Has a Long History of Violent Police Abuse, provides a great deal of the context for the Laquan McDonald case. It’s well worth your time to read that other article, but to make things easier, here’s a list of the highlights, along with many that are not in the article (with links).

In closing, Chicago has probably the worst police department in the entire country, its crime clearance rate is abysmal, and to top it off, a well-rated TV show glorifies the wanton police abuse and terror that residents are subjected to on a daily basis. But some people wonder why Chicagoans are “still” protesting.

142
SHARES
FacebookTwitterGoogleRedditTumblr
DiggLinkedinStumbleuponMailPrint
You Can Support Cop Block by shoppping on Amazon using the banner below:
BANNERS ARE CLICKABLE