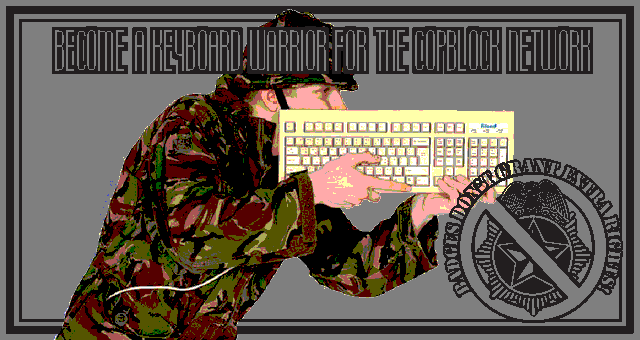 As we gear up to relaunch the all-new CopBlock Network, a project in which the friends and readers of CopBlock.org are able to add their own talents, skills and efforts to share the message that ‘Badges Don’t Grant Extra Rights’, it becomes necessary to come up with some directly stated and distinct goals. A portion of those goals fall under something we are (unofficially) calling The Keyboard Warriors of CopBlock. Despite the fact that the term ‘keyboard warrior’ is usually used as an insult by people who don’t understand the world they now live in, I have already publicly explained why ‘I Am A Keyboard Warrior Against the Police State and Proud of It‘.

The participation we are looking for in this area will require little more than doing what you are doing right now, surfing the web. We can break this set of tasks down into two basic areas.

Creating the content that helps fight the police state is a lot of work. And it is only effective if those messages get out there to the largest number of people possible. This is something that we need as much help as possible to achieve. Social networking is the most effective method of spreading our content and its messages online. Yet as a small core of writers, that can be hard to do. Many social network platforms will pretty much silence you if you share too much content from one URL, or ban you outright. Places like Reddit and StumbleUpon frown on individuals sharing too much content from the same site. So to break through we need as many people as possible willing to spread the message to help us out by sharing CopBlock.org articles, videos and other content in as many places as possible. As Facebook algorithms decline and Twitter becomes less popular, we cannot rely on the traditional methods of self-promotion that got us this far. We need to extend our reach to every place on the internet that ideas and links can be shared and we need you to help us do it!

In the past we have organized call floods or redirected our readers to various social media pages to share their thoughts with police departments, businesses and individuals who needed to know that people were calling on them to be honest and accountable. Whether it be instant messaging, commenting, posting or emailing- we need a group of people willing to organize in a short time to send a response in various places on social media and online. When local police departments are caught in the act of some heinous fuckery, we can flood their pages or inboxes with questions, comments or other statements that need to be heard. And sometimes you just have to get into the minds of police and their supporters to challenge them in ways that may cause cracks to form in their concrete skulls where seeds can be planted. I discussed this concept in an article aptly titled, ‘Trolling As Activism‘.

With the relaunch of the CopBlock Network just a few months away, we are still in the process of figuring out how to coordinate such a massive undertaking of volunteer-assisted police state resistance. We hope that by testing communication methods and tools, and getting input from all of you, that we can learn how to most effectively work together through trial, error and innovation. As a first step I have made a Facebook Group for means of communicating and co-ordinating. Go here to join:

Just a friendly heads up, the group will be moderated and those who are engaged in activities there not related to our goals will be removed. The group is ‘closed’, which means the group is visible, but its content is not. It is likely that it will be penetrated by those with different goals and agendas, so it would be a bad idea to engage in any speech that promotes violence, details a criminal activities or can other wise be used against you and/or the CopBlock Network. I will eventually be posting a feed so that all of the articles originating from our site will appear there and then you comment on the places you have shared them. As we get to know one another we can connect on our various social media accounts and use ‘likes’ or ‘upvotes’ or the equivalent to bolster one another’s posts. Use the group to share your identities as well as any social media tips and tricks you might have. Post direct action requests or watch for those posted by CopBlock.org contributors and local admins. And mostly, use it as a tool to communicate ideas for how to make the tool itself more powerful and effective.

Together we can accomplish some really amazing things, not by complex actions, but through a complex network of voluntary associations working towards the same or similar goals. By utilizing the time and talents of those who want to participate we can strengthen our message and become the most powerful force of activism in our time. I hope to see you there!