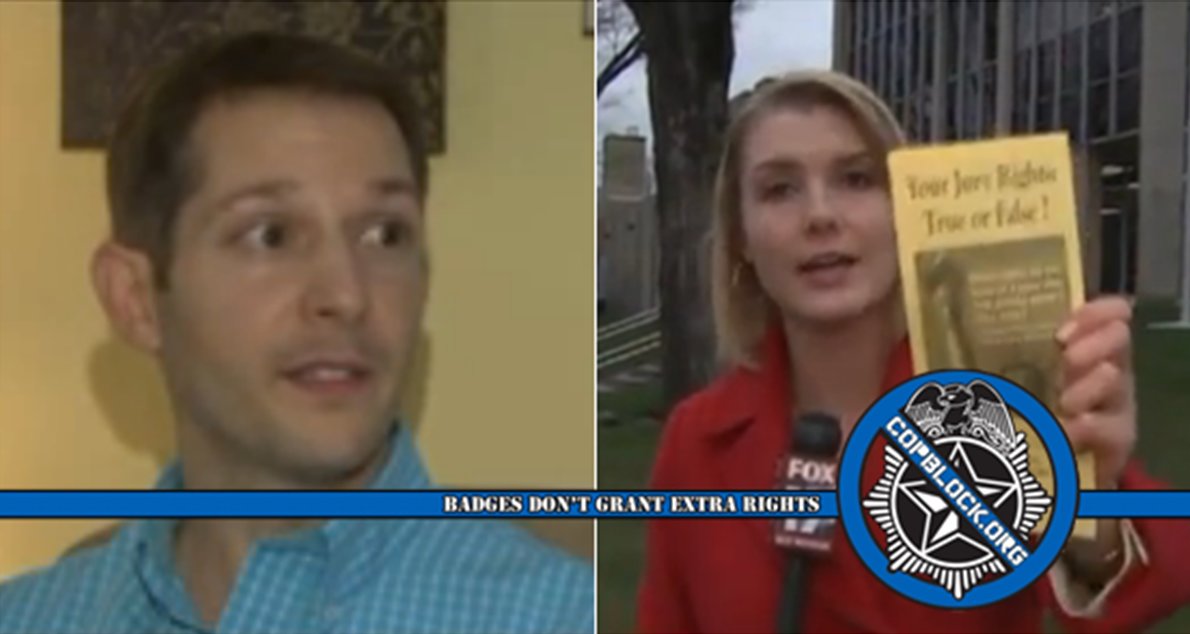 A Michigan man says he was “speechless” after being charged with felony obstruction of justice and having his bond set at $150,000 for handing out jury nullification fliers last month.

Thirty-nine-year-old Keith Wood handed out about 50 filers from the Fully Informed Jury Association in front of the Mecosta County courthouse on November 24 – that discussed jurors’ right to vote their conscience in opposition to unjust laws defendants may be charged with.

Wood claims court personnel came outside three times and asked him to speak with a judge before a deputy threatened to call Big Rapids Police to arrest him. He says he went inside but was told he was not being detained.

“[Courthouse personnel] wasn’t being rough but [they were]  kind of corralling me and… touching my jacket… so I asked… ‘Am I being detained,’ and [was told] ‘No,'” Wood said. “Judge Jaklevic [then] came out of his chambers, he looked at me, he looked down the hall, I didn’t know who he was looking at, and then he looked back towards me and the deputy and he said, ‘Arrest him for jury tampering.'”

Court officials have made no comment regarding the incident.

Attorneys for Wood have called the charges “outrageous,” and a “blatant illegal improper use of government power” – especially considering that the obstruction of justice charge carries a maximum of five years in prison and $10,000 in fines.

“It’s free speech for goodness sake,” Attorney Dave Kallman said. “The Judge directly ordered him to be arrested for jury tampering, for tampering with a jury that didn’t exist, now wrap your head around that.”

Kallman says that although most judges have omitted jury nullification from their jury instructions, the practice is an “implied” and “not overt” form of free speech which is Constitutionally protected.

The misdemeanor jury tampering charge is punishable by one year in prison and $1000 in fines, meaning Wood is facing up to a total of six years in prison. During a hearing last Tuesday, he refused to take a plea deal. As a result, his bond was set at $150,000. He says he charged $15,000 to a credit card to get out of jail.

Woods has another hearing set for next Tuesday where Kallman says he will be asking to have all charges against his client dropped. The two also maintain that they are considering filling a federal lawsuit against the court.

“When [the Judge] told me the bond… I was speechless. [A] $150,000 bond for handing out a piece of paper on a public sidewalk? Speechless,” Wood said. “I truly believe in my heart of hearts I didn’t do anything wrong, I didn’t break the law, so they need to drop all of the charges against me.”

Jury nullification occurs when a jury acquits a defendant, even though they believe them to be guilty of the charges under the law. Supporters maintain that not only do members of a jury have the ability to judge whether or not a defendant broke the law – but also – the law itself.

A nullification may occur when jurors disagree with the law a defendant has been charged under, or believe that it should not be applied in the case.

By the 12th century, common law courts in England began using juries for more than just administrative duties and recognized the de facto power of nullification. The power of juries to decide on verdicts was even recognized in the English Magna Carta of 1215.

In the United States, jury nullification has been utilized by jurors since before the American Revolutionary War to fight tyranny. Colonial juries frequently exercised the power in maritime and free speech cases. It became so popular that many British prosecutors gave up even trying to enforce the laws because convictions were so seldom arrived at.

Jury nullification was also used before the Civil-War to acquit runaway slaves being prosecuted under the Fugitive Slave Act.

During the prohibition of the early 20th century, juries often nullified alcohol control laws – as often as 60% of the time – which ultimately contributed to the repeal of such laws and the ratification of the Eighteenth amendment.

In recent rulings however, courts have prohibited informing juries about their right to nullify. In 1969, a Fourth Circuit decision upheld the concept of nullification, but affirmed the power of the court to refuse to permit jurors from being instructed about the right.

In 1972, the United States Court of Appeals for the District of Columbia Circuit issued a similar ruling. In 1988, a Sixth Circuit Court said, “There is no such thing as valid jury nullification,” and in 1997, a Second Circuit Court ruled that jurors can be removed if there is evidence that they intend to nullify.

The Supreme Court has never ruled on the issue, but in 2012, New Hampshire passed a state law explicitly allowing juries to be informed about nullification.