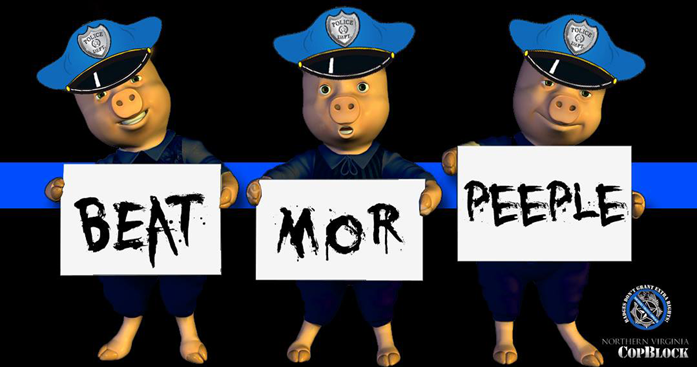 In Fairfax County, officers of the local police department are so frequently seen at our Chick Fil-A locations that they might as well function as satellite offices. That said, it really wasn’t surprising to see this article that had been making the rounds a while ago finally make it to the Facebook page of one of our local unhinged and unfailingly inappropriate police unions.

First of all, I’d like someone to explain how forcing fast food workers to wear cop worshipper propaganda on the job “changes everything for police in America.” In a string of incidents this summer, numerous restaurant chains fell all over themselves crawling up cops’ asses because one of their employees allegedly felt empowered enough to refuse service/free bathroom use to  police officers, even when it was merely cases of employees following established policy and not making special exceptions for cops.

However, Chick Fil-A has previously shown that it advocates using government force to restrict the liberty of other people, so it’s not really surprising that the company would be such a huge fan of government’s armed enforcers. Curiously, the article does not mention any free food event for law enforcement officers or on-going discounts. Nope, just low level workers being made to function as walking, talking, french-fry-scooping human billboards for the police state, encouraging ever more patronage from cops and their undying supporters. But wait…what if Chick Fil-A is actually pulling off an epic troll?

Let me explain. As you can see on the Officer Down Memorial Page, the third most common cause of ‘in the line of duty’ deaths for police officers is heart attacks.  What’s more the American Journal of Preventive Medicine found that cops are the fattest workers in the country, with 41% of them being obese! However that finding pales in comparison to an earlier report from the FBI that 80% of law enforcement officers are overweight. Keep in mind that the overweight category includes those who are obese + those who are overweight but not fat enough to be obese. Police departments have long been aware of this issue, as this 2008 article in Police Chief Magazine shows (emphasis mine):

“From 1983 to 1993, a study was conducted by the Cooper Institute for Aerobics Research that randomly sampled approximately 1,700 officers from different law enforcement agencies across the country. The results show that when compared with the general population, officers’ average fitness levels are below normal in the areas of aerobic fitness, body fat, and abdominal strength and average in upperbody [sic] strength and lower-back flexibility. The data show that law enforcement officers are less fit in most areas than at least half of all U.S. citizens despite the fact that the physical demands of their profession require that they be more fit than the average person.

The food that Chick Fil-A serves could hardly be considered a heart-friendly diet. By encouraging cops to eat their food even more than they already do, Chick Fil-A is posing an imminent threat to officer safety. They have in all likelihood directly contributed to the deaths of untold numbers of cops. As has been shown many times already, the fake war on cops is a lie, mostly waged by cops themselves, so it is fitting that cops continue to wage war on their own bodies every time they sit down to enjoy another one of Chick Fil-A’s Cop Killer Specials.

Additional Resources for the Unfortunates Amongst Us

Resource 2: An article that may help make things more clear

3.1k
SHARES
FacebookTwitterGoogleRedditTumblr
DiggLinkedinStumbleuponMailPrint
You Can Support Cop Block by shoppping on Amazon using the banner below:
BANNERS ARE CLICKABLE