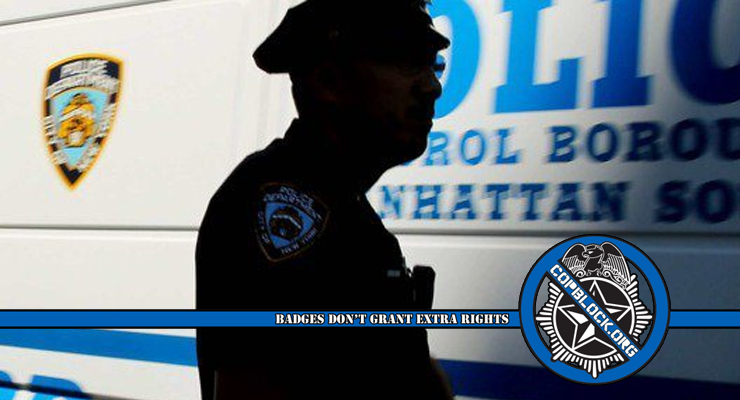 Articles
December 3, 2015December 2, 2015 Ademo Freeman 489 Views bronx, cop block, copblock, copblock.org, exposure, indecent exposure, nypd, school zone, suspended, wayne roach
9
SHARES
FacebookTwitterGoogleRedditTumblr
DiggLinkedinStumbleuponMailPrint
Wayne Roach had a great Sunday night or that’s what I’ll assume since he was found passed out with his pants around his ankles, jacket over his head and with his car running. And yes, Roach is a NYPD officer but that’s not the worst of it, he was also parked next to a school and it was noon when he was found in his car – unresponsive. According to ABC 7 out of NYC:

Investigators say parents saw off-duty transit officer Wayne Roach exposing himself in his car just steps from the front door of PS 134 on Bristow Street in the Morrisania section just after noon. They also said he was intoxicated and passed out, and that while his head was completely covered, other parts of him were not.According to the criminal complaint, Roach was sitting behind the wheel of a green 2001 Honda Civic with the engine running. He had his “pants down…exposed, jacked over his face asleep…in public view.”

Roach, 35, is charged with lewdness and DWI. The 10-year veteran has been suspended from the force without pay. He was released on his own recognizance.

I’ve said this before and I’ll say it again. These issues with police, the abuse or double standards, will not change until we have more options in the service of protection. Right now Roach is on unpaid leave which is something that wouldn’t happen to ANYONE else. If you were a teacher at a school, a factory worker in a plant or truck driver showing up to work so drunk that you take your pants off, pull a jacket over your head and pass out. You’d expect to be fired and even if you didn’t, you would be. Not cops though, nope, they get paid leave or unpaid leave (also known as vacations) and even if fired, it will most likely be quitely. So quietly that he’ll be able to get hired at the next department without question.
This is why we must demand a more direct form of policing. No more of this security theater, thin blue line protecting and state serving government police. Take it upon yourself, use cameras or hire ‘good’ cops to keep the real bad people away. Whatever it is you’d be willing to do, pay for or provide is what you should seek for your protection needs. The government run police aren’t here to do it for you, they have their own agenda.
9
SHARES
FacebookTwitterGoogleRedditTumblr
DiggLinkedinStumbleuponMailPrint
EPN