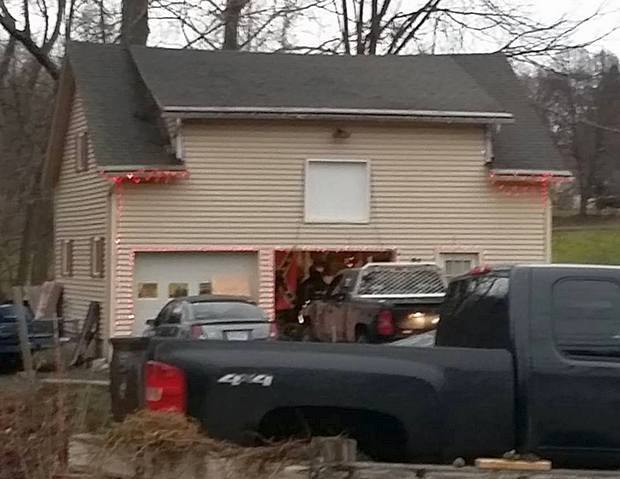 A flag can mean many things to different people. Some would say that the American Flag represent freedom, bravery and courage. While others might say it represents theft, control and murder. Like when two completely different book reports are turned into a teacher by students who read the same book. Perception of a collection of words, symbols or flags will vary from one person to the next. Furthermore, there are times when the varying perceptions are both accurate in one way or another.  For example, the American flag does represent freedom, bravery and courage – at times – but it also represents theft, control and murder.

This is the predicament Daniel McCarthy, a Greenfield, MA police officer, has found himself  recently. McCarthy, whom I’ve had personal interactions with and will touch on those later, is a 10 year veteran of the Greenfield police department and just so happens to hang a Confederate Flag in his garage. As detailed by MASSLIVE:

A veteran Greenfield police officer is under scrutiny for allegedly displaying a Confederate flag on property he owns in Greenfield.

The officer has been identified as Sgt. Dan McCarthy, commander of the detective bureau and the Police Department’s official liaison to the town’s Human Rights Commission.

The Confederate flag hanging on a wall inside McCarthy’s Shelburne Road garage is visible to passersby when the door is open, according to Rod and Lindel Hart, McCarthy’s neighbors and the concerned parents of Hugh Hart, the couple’s adopted 10-year-old son, who is black. Critics of the police sergeant have taken to social media to voice their disapproval, and the Harts are leading the charge. McCarthy hasn’t commented – publicly anyways – about what the flag means to him and that’s the key issue at stake. Right now there are only assumptions that it has a racist meaning but no actual proof. The only mention of the flag bearing racist meaning is from the Hart’s who claim such based off their own insecurities. While Mayor Martin and other public officials have visited the Hart home no one has heard from McCarthy himself and the people need to.

(NOTE: I wonder if the Hart’s realize that William (Bill) Martin is a good friend of McCarthy’s as seen in my video with him here – also posted below.)

Sure, it’s possible he’s being told to lay low or not to speak on the matter. Yet, the people have the right to know if that flag is a family heirloom or if he bears racist beliefs. If you feel the need to hang such a controversial flag in your garage, that can been seen from the public way when open, then man up and tell people why. Especially someone who’s a public official and whose job requires a neutral stance while interacting with people.

I believe that McCarthy would jump at this opportunity because all of my interactions with him were of a harassing nature. He thrives on being the bully and was labeled as the “enforcer” of the Greenfield Police – told to me by another Greenfield Police Officer. Furthermore, I wouldn’t be surprised if McCarthy did have racist beliefs, yet, I cannot label him a racist without clear evidence that he is and a flag isn’t enough for me.

What I can say without question is that McCarthy is an asshole that shouldn’t have a badge. He’s arrogant, defiant (he’s been in trouble with the PD before) and has all the signs of a bully. You don’t have to take my word for it either because I have the videos to prove it.

I met McCarthy after Pete Eyre and I were arrested for recording Todd M. Dodge and other public officials – see meta post here. After our arrest we were charged with felony wiretapping which meant that Pete and I (with Beau Davis later) spent a lot of time in the city of Greenfield, MA trying to clear our names. On our first extended trip to the town gave us our first interaction – as an introduction – with McCarthy.

After that encounter, where McCarthy ‘issued’ me a jaywalking ticket (that I never paid), McCarthy started following us regularly. In the video below you’ll see him following Beau Davis and myself around town. In that video I had enough of his stalking tactics and attempted to call the sheriff’s department on him. I’m sure you can guess how that worked out or you’ll see in the video below.

My last interaction with McCarthy was just days before our trial. Several of our family members and friends had come to Greenfield to show their support for Pete and I. Since my family had come from Wisconsin they were lodging at the Days Inn near the courthouse. One day we noticed a Greenfield Police officer sitting just down the road. We decided to “CopBlock” the (what we thought to be a) speed trap by holding signs and warning drivers. Little did we know that it was McCarthy who was waiting to do some more harassment, see video below.

Yes, McCarthy came into the hotel and demanded the ‘guest list’ and was given it. On that list were the names, credit card numbers and license plates of several of our family members and friends. McCarthy’s actions in these videos when without question though several complaints were made to the department, mayor and sheriff’s. In fact, since then McCarthy has been PROMOTED! Along with his colleague Todd M. Dodge who was the original arresting officer in our case and whom McCarthy was sticking up for with his harassment of us.

Here are three clear cut examples showing McCarthy being a bully, abusing his badge and attempting to intimidate people. Once again he’s in trouble with the department but since his father was a cop and he’s all buddy buddy with “Mayor” William (Bill) Martin I doubt any honest outcome will come of this. The politicos (Mayor and Company) will give lip service to the Hart Family and community but we’ll never know if McCarthy or other Greenfield public officials (like the mayor) are racists.

Thing is, we probably don’t need to have that answer to know that McCarthy – and many of his colleagues like Todd M. Dodge –   shouldn’t be wearing a badge. He’s a liability for the department, has been sued in court and hangs commonly racists flags in his garage. If you agree, feel free to let the Greenfield Police know that bullying, harassment and possible racism are NOT qualities of public servants via the contact information below.

For the record, Pete and I beat the wiretapping charges in July of 2010. In January of this past year I settled my lawsuit with the City of Greenfield for the wrongful arrest and harassment. Below is the full playlist that includes all videos from our time in Greenfield.