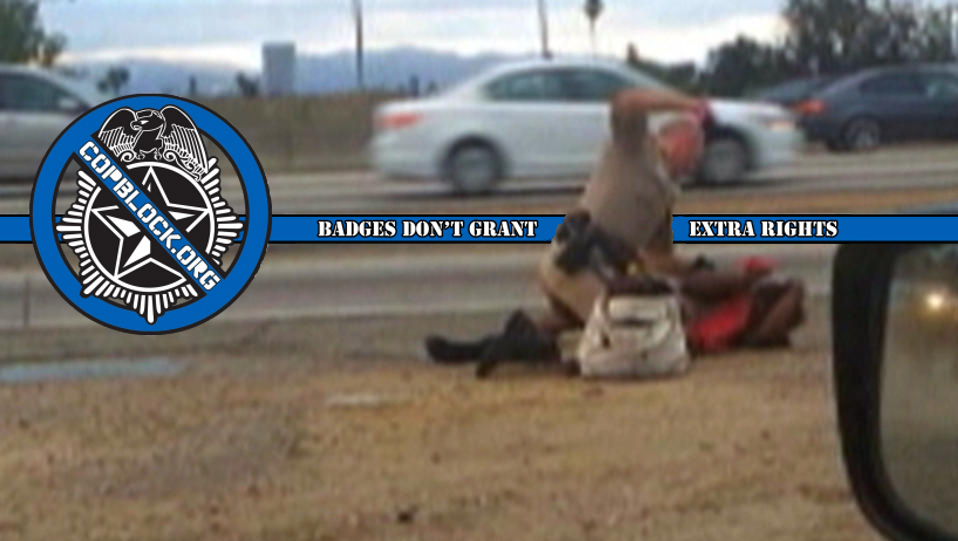 On Thursday, the Los Angeles District Attorney completed his “investigation” of the vicious videotaped beating of a 51 year old black woman on the side of the I-10 freeway by CHP Officer Daniel Andrew. In what shouldn’t be a surprise, Dist. Atty. Jackie Laceydetermined that Andrew’s July 2014 assault on Marlene Pinnock as she was pinned on her back on the ground was both “legal and necessary.” In addition, the report from the LA District Attorney’s Office states, there is “insufficient evidence to prove beyond a reasonable doubt that the force he used was unreasonable or excessive.”

Via the LA Times:

“When looking at all of the evidence, and especially the medical reports and eyewitness accounts, it becomes exceedingly clear that the officer, who was alone and struggling with Ms. Pinnock precariously close to evening freeway traffic, acted within the law,” Lacey said. “In our analysis, his use of force was legal and necessary to protect not only his own life but also that of Ms. Pinnock.”

Lacey also noted that the officer also had a duty to protect freeway commuters from a potentially dangerous situation had Pinnock gotten away from him and walked onto the freeway. Prosecutors relied on medical records, eyewitness accounts, recordings of 911 calls and multiple patrol car dash camera videos of the incident as part of the investigation.

Several eyewitnesses were interviewed, including three who said they saw Pinnock strike the officer and four who said they thought Andrew was trying to save Pinnock from wandering into freeway traffic and being killed or injured.

One of the witnesses is quoted in the report saying, “at a point I agreed with what the cop did … you know, he had to get her. He had to apprehend her. He had to throw her on the floor. The part where it gets deceptive is when he starts punching. That’s when it felt like that it was unnecessary … after the first two, it was, it was, he should have stopped.”

Equally unsurprisingly, many within the LA area, as well as advocates against police brutality nationwide, weren’t quite so convinced that it was necessary or that it should be legal. They also questioned the timing of the announcement being so close to the San Bernardino shootings.

(Also via the LA Times)

“We believe it came by design,” civil rights activist Najee Ali said of the timing of Lacey’s announcement. “The whole nation’s eyes are on the … tragedy in San Bernardino. The fact she [Lacey] slid this in, the timing is very suspect and it demonstrates cowardice.”

Apparently, a video showing a 51 year old woman being repeatedly punched (at least 10 times) by a man, who is probably half her age and likely at least twice her size, after she’s already being held down just isn’t sufficient enough to indicate excessive force within the Los Angeles District Attorney’s Office. In fact, it obviously was necessary for her own safety.

Officer Andrew was forced to resign as part of a 1.5 million dollar settlement the California Highway Patrol forced the residents of California to pay Pinnock to make up for Andrew’s actions.

Video on Incident by Pete Eyre