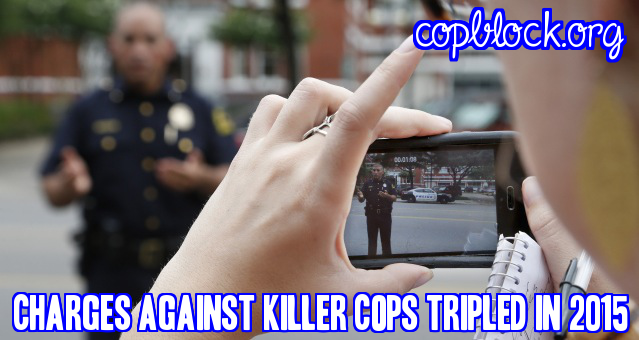 According to a new report from ABC News the number of law enforcement officers who were charged with murder or manslaughter for actions that happened while on duty has tripled this year. While the average nationwide number of killer cops who are actually charged with their crime has remained pretty consistent at around five per year, so far in 2015 there have been fifteen sets of charges against cops who killed while on the job. The most likely reason being given for this is the number of cases being caught on videotape.

However, I do not think this is completely accurate. The surveillance state and private security systems have been in regular use for quite some time now, meaning that many of the killings by police were likely caught on video in recent years, but just never released to the public. The difference now is that citizens are starting to record these deadly encounters and are releasing the videos before police have a chance to confiscate the evidence to cover up their crimes. And so it is individuals and not private businesses or government agencies who are making a difference. Our trust in those institutions to work against their own best interests to insure justice is diminishing enough that people are standing up and taking responsibility to spread the truth, and the results are just starting to pour in. And it is this new cultural attitude, not the video footage itself, that is making all of the difference.

So far in 2015 there have been almost 1,100 people killed by police in America. And while there are undoubtedly several cases where the person killed was engaged in behaviors for which getting shot by police was the most reasonably expected outcome, there are many more that were unnecessary and unjustified. Self defense laws supposedly require something called a Duty to Retreat. This requires the person claiming self-defense must be able to prove that they were unable to get away from the danger. However in almost all cases where cops shoot and kill, they were chasing their victim or were otherwise the aggressive party. If these standards begin to be used to measure police homicides, that number could easily go up a thousand times to see just under half of killer cops similarly charged in the next few years.

Mind you there has never been a period in history where violent crime committed by citizens has tripled in a single year. For deadly crimes committed by police to have tripled cannot reasonably be said to have happened because the crimes themselves tripled, but only because public awareness of our killer cop problem in this country is beginning to catch up and cops are just now beginning to be scrutinized for their murderous tendencies.  And while the number of police killings and charges against them rise, police and their supporters are so busy making them out to be the victims that they are becoming ever more reckless and deadly in the frenzied bloodlust of their manufactured fears.

While the recent false flag in San Bernadino has supporters of the state crying out to disarm law-abiding citizens, their solution is to put a monopoly on weapons in the hands of an institution that has a faster growing rate of murder and manslaughter than has ever been attributed to any group of people EVER. If only in the past century there had been a nation that had convinced its own population to disarm itself and work itself into a frenzy of hatred and fear so that the state could carry out mass murder against portions of its population, we might have an historical example to understand the context of what is happening right now in this nation.

Oh, there were several examples of that, you say? Well I’ll be…