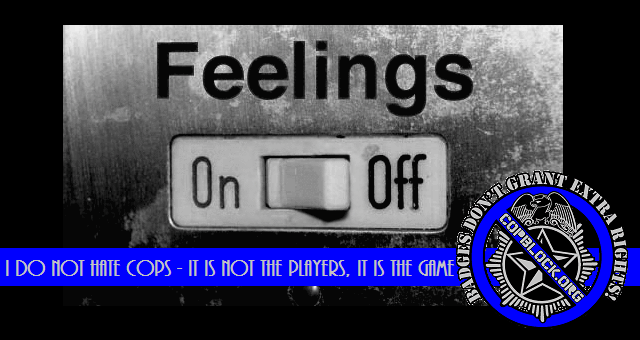 “You guys used to be all about keeping bad cops accountable, but now you just hate all cops.”

I see that comment all of the time. The cringe it inspires is instant. The lack of thought that has gone into it makes me embarrassed for my species. Then again, that’s not too difficult to do these days. But moving on, the comment is generally made because the person either is responding to some abstraction of CopBlock.org that exists only in their head (and was constructed from only reading the title, in many cases), rather than the content of the article that they are commenting on. It also happens when it is assumed that the people who comment on our articles at the site and in social media are endorsed by the individual contributors who write the articles.

Let me make this perfectly clear- we are not responsible for the people who comment on our work. If some mentally unbalanced character wants to use our website and social media as a way to spread their hate-filled message, we just don’t have the time to babysit them. And while calling those individuals out on their specific acts of hate is alright all around, projecting their behaviors onto us is emotionally immature and intellectually dishonest. Besides that, it has been clearly illustrated that government agencies create online accounts which they use as propaganda tools in an information war. And when confronted with truths that are harmful to their agendas, the classic response of such agencies is to attempt to discredit any movements from within. Obvious hate is obvious, and is just as likely to be a cop as someone who actually does hate them. Which brings me to the main point of this article.

I don’t hate cops. I believe that policing and the state are rapidly decaying and destructive institutions that need to be disbanded for the good of humanity. But that doesn’t mean that I have negative feelings towards every individual human being I see in a magic uniform and shiny badge. My response to police has nothing to do with my emotions. It is a rational and reasonable response to the reality of policing. When somebody assumes that my aversion to this institute of aggression is an emotional response, they are projecting their own egos onto mine. These people have never known police in any way except as an emotional reaction conditioned into them. Just like the people who actually do hate all cops and promote violence are just reacting via volatile emotional responses, the people who believe fervently in some abstract symbol of police that doesn’t really reflect the substance are also just slaves to their emotions. They cannot address the issue rationally or with reason, so that doesn’t even register to them as a thing that other people do. Emotional attachments centered around social conditioning make people blind to the thought processes of people who are not caught in the same traps as they. From their perspective, since the only way they understand cops is through their emotions, that must be the only way that they can be understood by everyone. So when you try to be rational and reasonable about the problems of policing and the state, it is like you are showing them a color that they cannot see, and instead insist that it is just a shade of a color that they can see.

Yes, I do advocate abolishing police, but I do not advocate hatred or violence against them. And I do not hate them. Sure, there are some individual officers whose acts are so despicable that I regard them with less value to society than herpes, but I do realize that otherwise good people with good intentions join that institution for some confounding reason. It is the institution of policing itself which is a failure. It is a bad game, and yes, I hate that game. Yet that does not mean I hate all the players. In fact I strongly believe that ending the police state would be the best thing possible for all sorts of well meaning and genuinely good people who get caught up in that system and have their dignity, morals and lives compromised by it. Some of the people I am trying to save from the police state are the police themselves. The things they are forced to do ruins their lives while ruining the world.

Which brings me to another point, I do not hate death, I hate killing. It is not the products of aggression and violence that trouble me so as it is the acts themselves. Everybody is going to die. The Cult of Survivalism which drives most of our violence is evidence against an unhealthy aversion to death and dying. Life is not a measure of quantity, but of quality. And so aggression and violence lower the quality of life and make it less enjoyable and meaningful. To trade a world worth living in for one where living becomes a meaningless act of survival is not a particularly great idea. When we allow aggression and violence to be institutionalized and monopolized we are just perpetuating the parts of our existence which we are supposed to be evolving past. There is nothing police do that can be worth the cost of living in a world that functions primarily uon restriction and aggression. If we got rid of these institutions today and the worst fears of people came true and the alleged bogeymen who surround us at every corner began to commit the contents of our fears and killed everyone in a year, that year would be more beautiful and meaningful than any other year we have ever lived, because we faced our fears and the natural consequences of the world without organizing against them using the same methods. Our civilization and collective consciousness suffers from our choice to organize violence. It is a form of acceptance that perpetuates violence, rather than seeks rational means to address it. Violence is not a rational method of addressing violence, because aggressive violence is never rational, even (especially) when organized or consented to by a majority. This, by the way, is not a statement of compulsive pacifism. It is a simple illustration that elevating violence through organization does nothing to stop violence. It just makes it worse. And people living in a violent world are unable to be fully free individuals, or to be critical thinkers. Organized violence requires that we dumb ourselves down in order to maintain consent for it.

I do not hate cops. I hate waking up in the morning knowing that hatred and fear are the steering wheels of peoples minds. And I hate knowing that despite the fact that a road of reason lies ahead, steering with hatred and fear will land us in the ditch. The ditch on either side is a festering pit of ignorance and devolution, dragging us back into our primal instincts and away from the rational capacity we have evolved over innumerable generations. Essentially, I hate stupidity. And stupidity is the fuel that fires the police state.