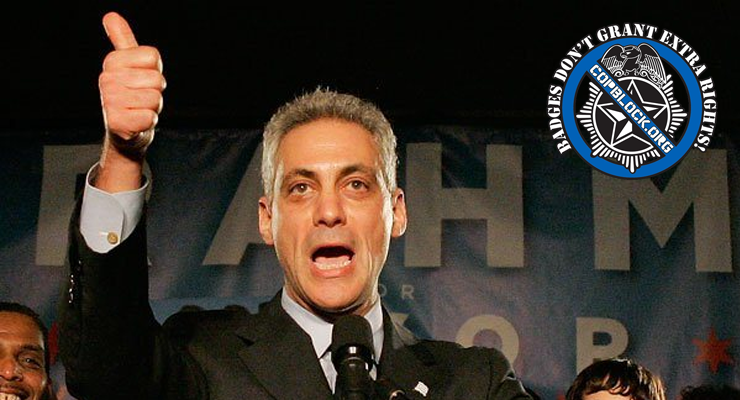 In an op-ed published in the Chicago Tribune, Mayor Rahm Emmanuel is publicly taking personal responsibility for police brutality in Chicago, as well as, promising to fix the problem. Chicago’s history is heavily tainted with police brutality and corruption.

Chicago is facing a defining moment on the issues of crime and policing and the even larger issues of truth and justice. To meet this moment, we need to conduct a painful but honest reckoning of what went wrong — not just in one instance, but over decades. Then we need to determine what to do differently to ensure that incidents like this don’t happen again.

We cannot afford to have any resident of our city living in fear of the police and distrusting their words and actions. And we cannot allow the crimes of a small number of officers to taint the good work of the vast majority who put their lives on the line every day.

What happened last October 2014 on South Pulaski Road should never have happened. Systems should have been in place to prevent it. Supervision and leadership at every level of the police department and the oversight agencies should have come into play.

They didn’t, and that has to change.

What I strongly reject is the suggestion that the videotape of the McDonald shooting was withheld from the public because of the election. Here are the facts:

The videotape was handled in precisely the same way such tapes and evidence have been historically. Longstanding practice has been to release such material only after prosecutors and city investigators have finished their investigation. The reason for that was to prevent potential witnesses from tailoring their stories to fit the evidence.

Some say I should have ordered a departure from standard procedure and released the tape before the prosecutors had acted. Had I seen the video, I might have done that. But I don’t review evidence precisely because my own emotions should not interfere with criminal investigations.

The release of this type of evidence is one of many issues we need to rethink moving forward. How do we balance concerns against prematurely releasing evidence and jeopardizing prosecutions with the community’s right to see such material in a timely way? How do we promote accountability and transparency, without sacrificing one for the other?

In this case, the city followed its standard policy.

Within nine days of that shooting the city collected all evidence in the case, including the dash-cam video, and turned it over to prosecutors. No one could have predicted that it would take more than a year to finish the probe. It was just as likely that charges would be filed during the campaign, in which case the video would have become public before the election.

At the end of the day, I am the mayor and I own it. I take responsibility for what happened and I will fix it. Nothing less than complete and total reform of the system and the culture will meet the standards we have to set for ourselves.

So I should have known that in the light of the checkered history of misconduct in the Chicago Police Department, that the long delay in releasing the videotape could raise concerns and suspicions across our city. Our goal was to protect the integrity of the investigation. But instead of establishing trust, the prolonged period between when the shooting occurred and when charges were filed created mistrust.

We need to fix that and restore the trust that was lost.

Some have alleged that our settlement with Laquan’s family was part of a cover-up. But nothing could be further from the truth. It was the lawyers for Laquan’s family who approached the city on February 27 and expressed a desire to settle the case quickly and without a lawsuit. The city’s lawyers began discussions with the plaintiff’s attorney shortly thereafter and came to an agreement in principle on March 24.

As part of that agreement lawyers for the family and the city sought to present the settlement for approval at the next City Council meeting, which was on April 15. The first possible opportunity to present the agreement to the Council’s Finance Committee was on April 13. At that meeting, our Corporation Counsel, Steve Patton, explained why a settlement was in the city’s best interest. Among the main reasons was the police dash-cam videotape, which he described in detail.

If there is any good to come out of this horrific incident, it has caused us to re-examine how we handle cases of police misconduct and excessive force in Chicago. And I’m committed to making the changes our city desperately needs.

If any good comes from this tragedy, it should be a historic set of reforms that prevents abuses, promotes transparency and rebuilds the confidence of all Chicagoans that they will be treated fairly. That is the marker I am setting for myself, the next police superintendent and the reform commission I’ve appointed. And it’s one by which I expect to be measured.

Rahm Emanuel is mayor of Chicago.

I’m not too sure that the Mayor’s statements can be taken seriously. The next year after his election Chicago police were involved in 50 incidents where officers used their weapons, 57 people were injured and 8 were killed. The police violence has only escalated, with 70 people being killed between 2010 and 2014. It might be too late for the Mayor, activists and community members have already started calling for a recall. Allot of the city already believes that Rahm would not be the Mayor if the video had come out during election season.