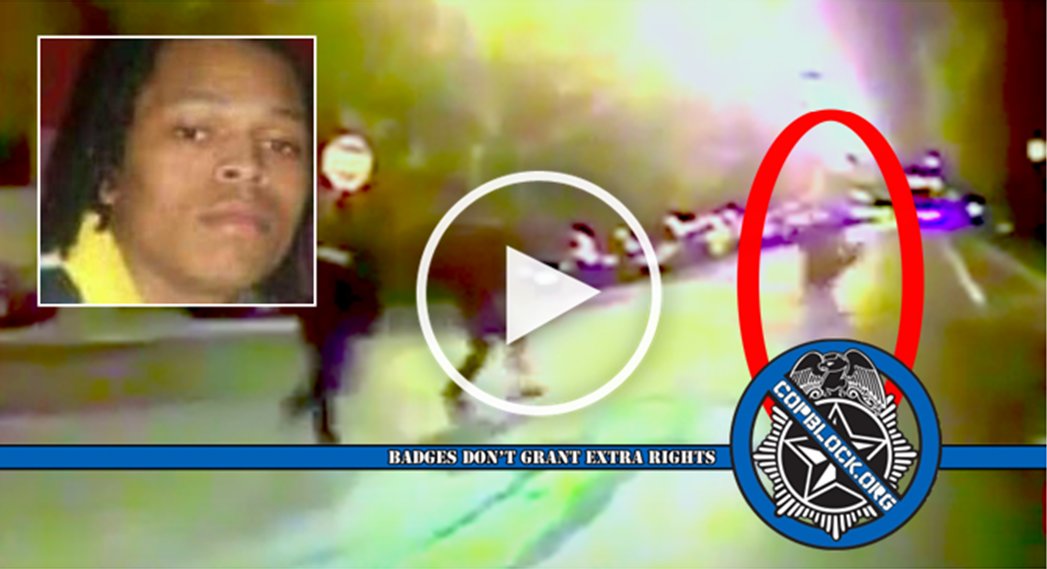 The Chicago police department is in the spotlight again after Cook County State’s Attorney Anita Alvarez said during a press conference on Monday that officer George Hernandez will not face charges despite dash-cam video showing him shoot down a fleeing man in the back.

Prosecutors say 25-year-old Ronald “Ronnieman” Johnson left a party at around 12:30 a.m. on October 12, 2014 with three other people following an altercation in which the vehicle they were riding in was struck by bullets fired by an unknown gunman.

Upon receiving 911 calls of shots fired, officers responded to the scene and spotted Johnson – who they maintain was carrying a gun, and ordered him to drop it.

Officers even said Johnson fought with an officer and turned and pointed his weapon at police, but family and representing attorneys have called those claims lies and are alleging an outright cover-up.

“The police and the state’s attorney office have lied,” attorney Michael Oppenheimer said. They said he turned and pointed a weapon. And nobody can say he turned and did anything of the sort. There was no investigation in this case.”

What occurred prior to the shooting was not captured on the dash-cam video, but the footage clearly shows Johnson running away from officers with his back turned when officer Hernandez fires two fatal shots.

During Monday’s press conference – which Oppenheimer called nothing more than a “27-minute infomercial” for the police – prosecutors said experts with The Independent Police Review Authority determined after analyzing the dash-cam footage, that Johnson was in possession of a firearm.

Alvarez even produced a blown up screen-cap from the video that supposedly shows the weapon. Few are swayed however as the grainy photo seems to show nothing of the sort.

A firearm was allegedly recovered from the scene that had Johnson’s DNA on it but family assert that the gun was planted and rubbed in their loved one’s blood following the shooting. Additionally, attorneys say that Johnson’s fingerprints were not recovered from the weapon.

“There was no gun visible in Ronald Johnson’s hand because there wasn’t one. He was unarmed,” Oppenheimer said. “This was a cover-up from the beginning. They showed you a blow-up and it’s a shadow.”

Van Dyke was charged with murder, but after it came to light that officers went into a Burger King across from where McDonald was shot and deleted 80-plus-minutes of surveillance footage, even the New York Times called for Mayor Rahm Emanuel to resign over what they called a “cover up” in that case.

The Times also speculated that city officials postponed the released of the McDonald dash-cam footage for over a year, not because of riot concerns like they suggested, but to hide criminal evidence in order to ensure Emanuel was safely reelected by “allowing a first-degree murder suspect… to remain free for over a year on the city’s payroll.”

Luckily for the Mayor – who has long been alleged to have close ties with organized Chicago crime families (mafia) – news coverage from the mass shooting in San Bernardino has eclipsed him from the spotlight. This led to Emanuel releasing this bit of propaganda were he says he takes full “responsibility” for the way the McDonald case was handled but obfuscates the role he played.

Calls for Alvarez to resign have also been made by numerous local politicians including 10 Chicago City Council members. Alvarez has responded by saying she “will not be bullied” out of her position.

Johnson’s mother, Dorothy Holmes, is unmoved by the State’s Attorney’s political maneuvering, especially in light of the alleged cover-up and conspiracy she claims in her son’s murder. She maintains that Johnson’s only crime was running away when officer Hernandez executed him, and is in a state of disbelief that the cop wasn’t criminally charged.

“If that would of been anybody in [Alvarez’s] family that got killed like that, that officer would have been charged with murder,” Holmes said. “For her to say my son has an object in his hand, I tell it to her face. It’s a bald-faced lie. He had nothing in his hand. I hope one day she feel the pain I feel.”

Holmes is expected to file a federal wrongful death lawsuit against the city. You can show support for her fallen loved one by visiting the Justice for Ronnieman Facebook page and using #JusticeForRonnieman on Twitter.