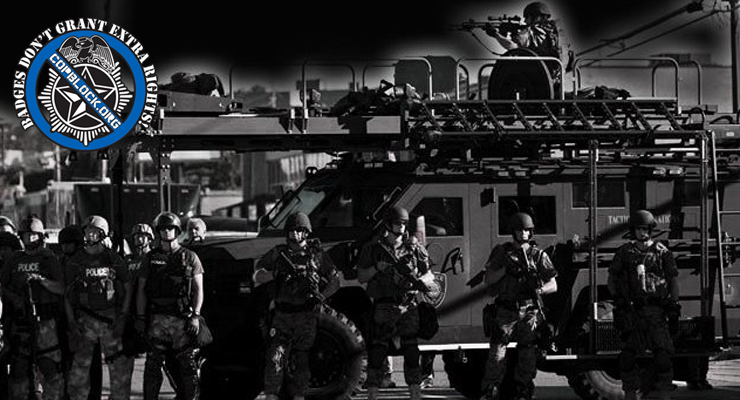 Police to Give up Some Military Surplus: You Are More Likely to Die from a Bee Sting or to be Crushed by Your TV, Than Die from a Domestic Terrorist Attack

President Barrack Obama has ordered the federal government through an executive order to confiscate some of the military surplus equipment from police departments across the country.

The president’s executive order will retrieve military surplus equipment and all vehicles that are over militarized. Including tracked armor personnel carriers, grenade launchers and bayonets.

In 2015,  41 (FBI statistics) mass shootings have already occurred across America and local police forces are claiming now is when they need this equipment the most.

Mahoning County Sheriff Jerry Greene believes, “police are facing war zones on the streets with criminals and terrorists using semi automatic weapons to murder unarmed men, women, and children, or detonating bombs like in the attack at the Boston Marathon, law enforcement should be given every tool in the arsenal to help keep communities safe.”

“Seizing the equipment from police departments is a bad idea with terrorism, school shootings, and war on streets,” Altiere told WFMJ.

Although the claims may sound frightening statistics show another side to the story.

Terrorist attacks sound like a legitimate reason to arm our police with battlefield equipment,  nonetheless statistically your chances of being murdered in this fashion are slim to none.

In 2011, 17 U.S. citizens were killed worldwide as a result of terrorism. That figure includes deaths in Afghanistan, Iraq and all other war zones.

Politifact claims only 24 people have perished within the United States due to terrorism in the last decade.

To give you an idea of where terrorism sits on the way to die list in the United States, every year 40 plus Americans die from bee stings, leaving you 8 times more likely to be fatefully injured by a bug than a domestic terror attack.  With this line of thinking why do police not arm themselves with bug repellent?

Your chances of dying by lightning strike are greater than dying from a domestic terrorist attack. Eighteen people have been killed by lightning in 10 states so far in 2015. The National Oceanic Atmospheric Administration (NOAA) has more details on most of those fatalities.

You are more likely to be assaulted by a shark than a domestic terrorist attack. Every year 19 Americans are attacked by sharks, should we hire more life guards?

A 2011 Report on Terrorism from the National Counter Terrorism Center notes that Americans are just as likely to be “crushed to death by their televisions or furniture each year” as they are to be killed by terrorists.

Even more shocking to put it into perspective, you are incredibly more likely to die at the hand of the police on American soil than at the hand of domestic shooter, terrorism attack or a bomb. So why do they need all this military gear? Its a waste of tax payer money and it escalates already intense situations.

Using terrorism among other reasons to violate the Posse Comitatus Act is not justified. If you don’t like the law, lobby to change to change it. Ignoring existing laws shows lack of accountability and will leave American citizens and patriots feeling helpless.

Even so, based on these statistics, as well as other resources the government has available to them, there is not enough evidence to support turning our local police into urban troops.

If terrorism on U.S. soil is such a threat why don’t we arm all available Americans with guns and training, it is the American way after all.

One Nevada Assemblywoman, Michele Fiore, even suggests all Americans should arm themselves to protect their local towns from terrorism.

5.9k
SHARES
FacebookTwitterGoogleRedditTumblr
DiggLinkedinStumbleuponMailPrint
You Can Support Cop Block by shoppping on Amazon using the banner below:
BANNERS ARE CLICKABLE