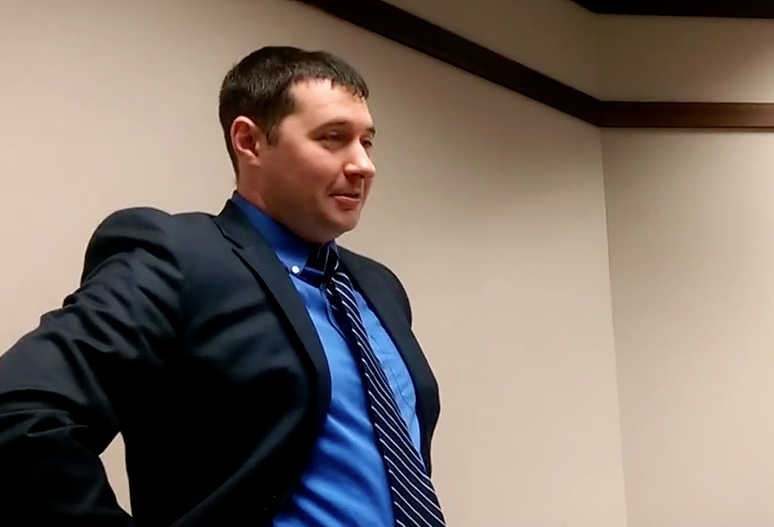 Today Brian, Miah (Indiana CopBlock founder) and I once again traveled to Noblesville, Indiana. We have friends in Noblesville but this trip was not a social visit. It was one that if not made then men with guns (the police) would be looking for us, at our houses, friends house and so on. Yep, we had court today in Noblesville regarding our horrendous crime of chalking a sidewalk outside of a police station.

And though you may think what I outlined above is an over exaggeration, the men with guns hunting us down, spare me because it’s not. The ‘crime’ we’re accused of does not warrant such treatment at anytime, after all, we didn’t harm anyone. So, what was so important that men with guns would come hunt us down like dogs if we failed to show up? A rescheduling of our upcoming hearings. Seriously, see video below:

Why James Baldwin (or Brian Johnson – the prosecutors) couldn’t call, email or notify us before hand that our hearings were being rescheduled is beyond me. Three reasons for this might be; forcing one to attend court is a way to control them (remember if you don’t show up men with guns come and you catch another charge for bail jumping), the system lacks any sense of efficiency (which would make sense, just like the DMV, Post Office or other government agencies) or it’s personal and they want to waste our time. I’m going to chalk this up to the lack of efficiency and that James isn’t fond about contacting me.

James also didn’t seem willing to discuss the case with us in any detail. Nevertheless, he did seem interested that Brian and I would plead guilty to the charge of “Criminal Mischief” under a few conditions. That we’d be sentenced to time served, no probation, no restitution, no charges on any additional allegations of chalking. Why he didn’t go call whoever at the police station and try to end the case today seems weird (with a guilty plea). Or attempt to make that call in the next week before our next court date. Instead I was told that it’s the “busy time of year” – as if courts have a slow season – and that its probably isn’t possible within a week. I noted that our goal in pleading guilty is to save time. The sooner we end this case the sooner we get back on the MAC tour. Naturally this didn’t seem to incentivize him at all. What more can you expect from a guy who just has to show up from 8 – 4 each day.

I guess that brings this back to being personal. What else can it be? If the victims (the police department) reject our guilty plea then what do they want? More jail time? Restitution (for two paid, no matter what, city workers and a power washer)? James said he doesn’t think we should do more jail time, so that can’t be the goal. This has to be about wasting our time and has been from the start. That’s why the Noblesville Police issued warrants for our arrest instead of arresting us on the night of the crime. It’s not about justice, restitution or teaching us a lesson. It’s about wasting time. Sadly those who work so tirelessly to waste our time fail to realize that they’re not only wasting their own time, but taxpayer resources too (which is never really the concern of the state’s agents).

I guess the only real question left is, ‘how much more of our time (and Noblesville taxpayer money) are they going to waste?

Consider calling the prosecutor’s office – particularly James Baldwin and Brian Johnson – (317) 776-8595 and ask them to end the case ASAP.

I’M A HYPOCRITE: Yes, I do say people should refuse all plea deals. Yet, this needs to be a coordinated effort and not one that is done by one, two or even 10 people. When I advocate for refusing plea deals and/or clogging the court system with endless victimless crime trials, I mean in masses.

The system is built to not only handle a few resisters but it’s also made to make an example out of them. Therefore, feel free to leave the comments about my hypocrisy on offering, or being willing to take, a plea. We weren’t planning a mass act of civil disobedience when we stopped in Noblesville and we’re eager to get back into MAC.