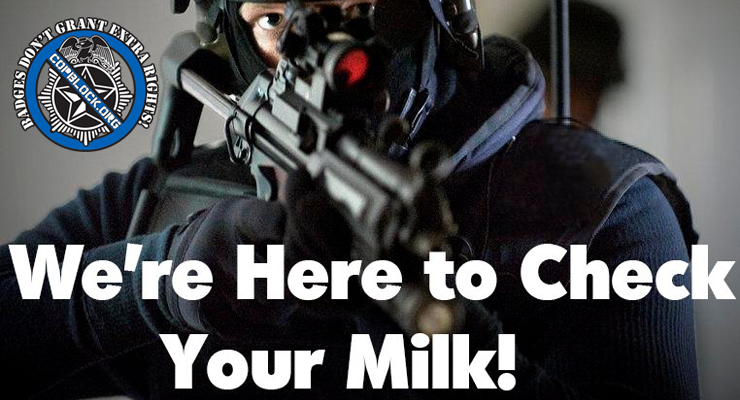 All throughout the United States there are government agencies who have no association with national security acquiring military-like equipment, according to news talk KFLD.

Many agencies are also receiving SWAT teams including the Department of Agriculture, the Railroad Retirement Board, the Tennessee Valley Authority, the Office of Personnel Management, the Consumer Product Safety Commission, the U.S. Fish and Wildlife Service and the Education Department.

In almost prophetic fashion Ron Paul in a 1997 warned about the militarization of federal bureaucrats; including the BLM, which was not yet armed.

“All government power is ultimately gun power and serves the interests of those who despise or do not comprehend the principles of liberty,” said Dr. Paul.  “The gun in the hands of law-abiding citizens serves to hold in check arrogant and aggressive government. Guns in the hands of the bureaucrats do the opposite. The founders of this country fully understood this fact.”

Which is exactly what we are seeing today with the over militarization of government agencies that have no reason to be armed.

The USDA has used its new military power to threaten people who grow lemon trees; force large fines on people for selling bunnies; confiscate grapes for no real reason; and ruin the livelihoods of small farmers.

One USDA SWAT team even seized bees privately owned that were proven resistant to Monsanto’s GMO Roundup and killed all remaining Queens. This shows the incestuous relationship between crooked corporations like George Soro’s Monsanto and government agencies.

The USDA is not alone in it’s abuse of power. The Bureau of Land Management (BLM) and Environmental Protection Agency (EPA) have recently used their swat teams to bully Americans for lobbyist interests or to punish political enemies.

Given the nations current debt, which approaching 20 trillion dollars, it seems like a foolish investment and wasteful to tax payers to buy all these unnecessary military equipment.

Why does US Department of Agriculture (USDA) need submachine guns? The agency’s Office of Inspector General (OIG) is requesting .40 Caliber semiautomatic submachine guns along with 320,000 rounds of hollow point ammo.

Why is the US Postal Service soliciting proposals for assorted small arms ammunition?

Why has the Social Security Administration requested 174,000 rounds of hollow-point bullets?

Why does the National Oceanic and Atmospheric Administration (NOAA), which oversees the National Weather Service, need 46,000 rounds of hollow point ammo?

For what purpose does the EPA need a SWAT team?

Why do colleges need MRAPS and militarized campus police?

Why are government agencies raiding non-violent citizens? Al Armendariz, the regional administrator who was video-taped saying the EPAs “philosophy” is to “crucify” and “make examples” of US energy producers.