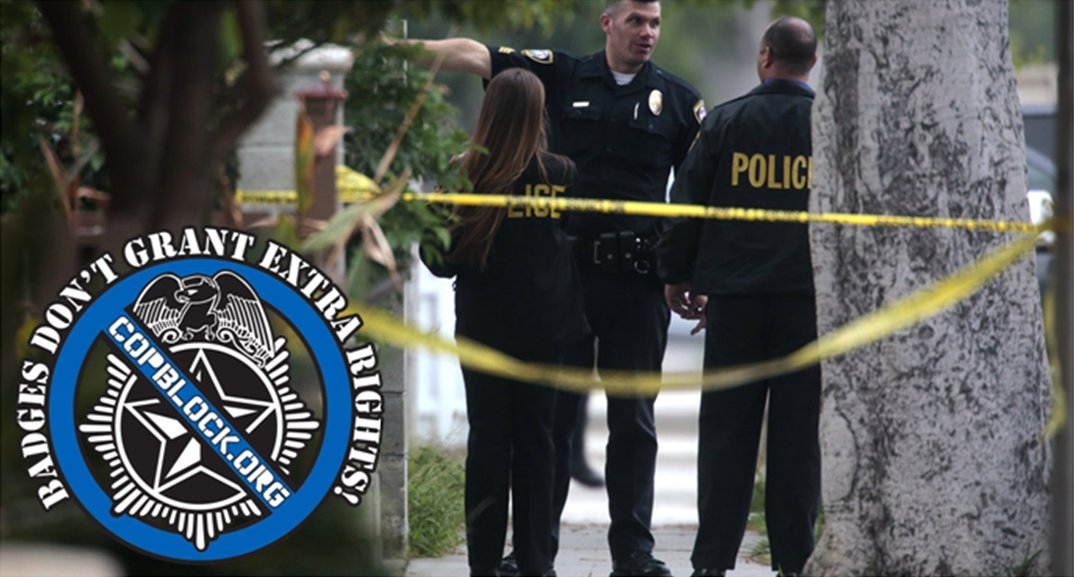 In an epic display of criminality and wanton disregard for human life, an Inglewood, California police officer shot two innocent men a combined total of 11 times before he and other officers planted guns on them in attempt to frame them for a murder committed by the cops, and a robbery they were responding to, a federal lawsuit says.

Robert Pickett and Darryl Lewis, who are both in their 30s, say officer Mike Bolliger responded alone to a call of a home invasion by two black suspects who might be armed at an apartment complex where Pickett’s cousin lived just after midnight on May 24, 2011.

The men say they that had been grilling burgers all day and were standing by the security gate at the front of the complex entering the pass code so they could pick up some dumbbells, when Bolliger “parked his car at the corner, got out armed with his shotgun cocked, loaded and ready to fire,” and shot them.

The lawsuit maintains that “no questions [were] asked, no weapons [were] seen, [and] no words [were] offered or exchanged [before] Defendant [officer] Bollinger blasted three shotgun rounds at the hapless and unarmed plaintiffs, striking them and wounding them as they sought to take cover from assault, [which left] them in critical condition, bleeding face-down on the ground.”

By the time the onslaught was over, Pickett had suffered seven total gunshot wounds, including one to his head, and Lewis was shot once in the back and three times in the legs. The men say that as they lay bleeding and handcuffed “in critical condition,” other officers arrived on the scene and helped Bolliger “set out to cover up the shooting of two innocent, unarmed men.”

The lawsuit, which was filed on December 3 against the city and five of the officers involved including Bolliger, says the cops fabricated a story that the men had been the robbers reported to police, and had pointed guns at Bolliger when he confronted them.

The lawsuit asserts however, that the neighbors who reported the break in did not identify the men as the culprits, and that the first photos taken of the scene where they were shot “do not show any weapon nor any of the stolen items.” It is additionally claimed that “some of the responding officers to the scene failed to see any weapons purportedly belonging to either plaintiff.”

The men say two handguns and stolen goods suddenly appeared next to them after being planted by officers, but that “subsequent forensic analysis before [their] criminal trial [determined] that neither plaintiff was in any way connected physically with the weapons or the items.”

Adding further insult to the already calculated cover-up, the lawsuit says, “while driving with reckless abandon to the scene, [officers] ran over a pedestrian, in a cross walk, killing her” – and charged the men not only with the attempted murder of Bollinger and the bogus gun and robbery charges – but for the woman’s murder as well, which they were also latter vindicated of.

The men say it took nearly an hour for them to receive medical attention after being gunned down, and that Bolliger refused to let paramedics tend to them despite being critically wounded. In addition, Pickett says Bolliger explicitly told him that, “he did not give a fuck that he had shot him in the head.”

The lawsuit also maintains that officers “conducted tainted six-pack lineups in an effort to get the purported robbery victims to identify [the men],” falsified reports, and perjured themselves by giving false testimony against them.

Pickett and Lewis spent a year in jail awaiting trial before a jury finally exonerated them. In the suit, they are seeking punitive damages for “civil rights violations, unreasonable and excessive force, false arrest, malicious prosecution, and failure to intervene, train, supervise and discipline.” Inglewood officials have made no comment regarding the pending litigation.