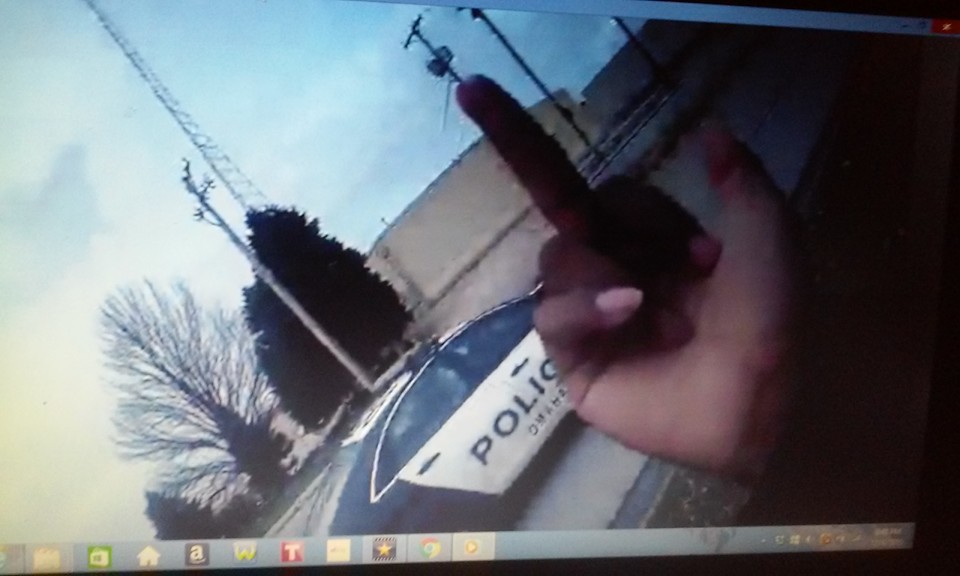 “Write it up the way you need to write it up.”

Those were the words of an unknown Omaha Police Officer as he spoke to his colleague, Donald Lucero, who was arresting Floyd Wallace, founder of Omaha CopBlock, for “disorderly conduct.” Those of us who have interacted with the police more regularly know about the catch all charge of “disorderly conduct.” While swearing at police, or flipping them off, has been ruled in court to be a protected right. The police are still arresting people who hurt their feelings and then ‘write it up the way they need to write it up’ in order to make the charges stick.

That’s almost what happened to Wallace when he came across Lucero on Tuesday night around 6 pm. The video below starts with Wallace saying that he’s recording too. You quickly see that Lucero is in the car also recording. Wallace attempts to record Lucero’s name and/or badge number when the he asks him to back away from his car. Wallace complies with the request but says, “Fuck the Police” as he backs out – see video below.

Thankfully Wallace is a CopBlocker who knows if he wants to roll around saying “fuck the police” to the police he has to have a camera with him. If Wallace didn’t have a camera with him the report would be written by the officer to say he was being disorderly by approaching the vehicle. When the video clearly shows that Wallace followed the officer’s commands and that the officers wasn’t taking action on the ‘disorderly conduct’ until swearwords went flying.

It seems that the prosecutor for the state realized this and immediately after Wallace plead “not guilty” in court the following morning they dropped the case. Now all Wallace has to do is go collect his wrongful arrest check and get his apology from Lucero to make everything right. I doubt that will happen, the apology, but what I do know is that Wallace will be out filming the police again soon.

Next time he’ll be wearing a CopBlock “F=ck the Police” shirt though, which I feel he’s more than earned after this close encounter with the dreaded “catch all charge of disorderly conduct.”

OTHER OMAHA COPBLOCK VIDEOS BELOW:

Last week I blogged about Jeffery Tudor, whom gave a similar salute to cops, and is still facing charges. Why is that?