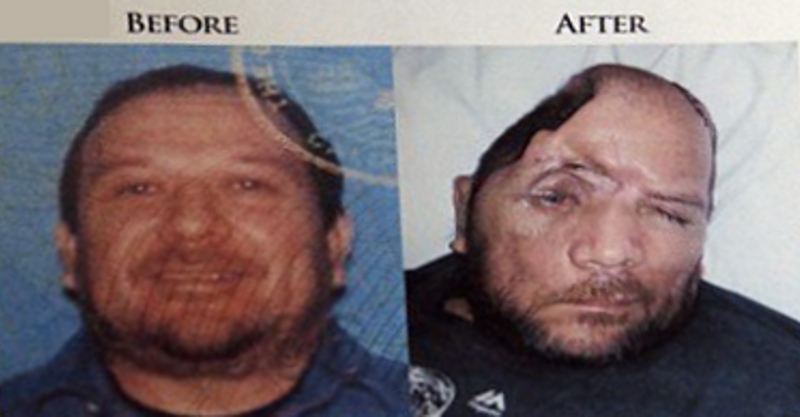 Walter Deleon, the unarmed and completely innocent man who was shot by LAPD officers on June 19th, filed a lawsuit against the city and police department last week. Deleon lost a quarter of his skull, as well as most of his eyesight and his ability to walk when he was shot by Officer Cairo Palacios.

At the time he was shot Deleon was trying to flag Palacios and his partner down in order to ask for help. The “justification” for (literally) blowing Deleon’s brains out was that he was “walking aggressively,” had a towel in his hand, and refused to drop a non-existent gun when ordered to.

Palacios’ attorney, Gary Fullerton, said the shooting was within departmental policy because Palacios was convinced that a towel wrapped around DeLeon’s hand was hiding a gun and that he and his partner were in imminent danger.

“He basically forced their hand to deal with him,” Fullerton said. “In the matter of a couple seconds they have to make a choice, and the choice is, ‘Do I let him shoot me first and then fire?’ or ‘Do I shoot first and defend myself?'”

Soon after DeLeon was shot, a police spokesman said Palacios and another officer were driving in stop-and-go traffic when they saw DeLeon walk aggressively toward them on a sidewalk.

Police Cmdr. Andrew Smith, a department spokesman, said DeLeon’s hands were clasped together and wrapped in a gray cloth, and that the officers believed he had a gun. Smith said DeLeon was shot after ignoring orders to drop the gun. DeLeon’s attorney, Ben Meiselas, said DeLeon had a towel wrapped around his hand to wipe the sweat from his brow on a hot summer day, and that DeLeon had been flagging down the officers for help, though he said his client can’t remember why.

“The next thing he was shot, and the next thing he remembers is he was in the hospital,” Meiselas said. “This is the most catastrophic of catastrophic injuries and it affects every aspect of life — physical, economic, family. It’s a total destruction of self and self-worth, and the only way to rebuild is through this process we’re initiating.”

DeLeon lost a quarter of his skull, almost all his eyesight and the ability to walk. He still has his memory and most cognitive functions but has trouble speaking.

He spent five months in the hospital, underwent 10 surgeries and is completely dependent on his family’s care.

“My whole life was turned upside-down,” DeLeon told The Associated Press through tears.

His sister and primary caregiver, Yovanna DeLeon, said her brother has lost everything most people take for granted.

“We get up, we get ourselves dressed and ready to eat, we go about our day … My brother will never be able to do that again,” she said. “If this had been a normal citizen that had done this to Walter, that person would have never seen the light of day.”

The DeLeons are seeking unspecified damages. They also want Palacios to face criminal charges and for the department to make changes to ensure no similar shootings ever happen again.

Quite obviously, Deleon will get a huge payday out of this, but I have zero doubt that given the option he (nor anyone else) would choose to have a quarter of their skull shot off in exchange for however many millions the taxpayers of Los Angeles will be forced to pay him on Palacios’ behalf.

Beyond that, the bigger lesson here is that at this point police have permission to murder anybody they wish, with as little reasoning required than the mere presence of something in their hand. Regardless of how benign that object might be, there’s absolutely no chance that they might face any sort of repercussions for their actions.