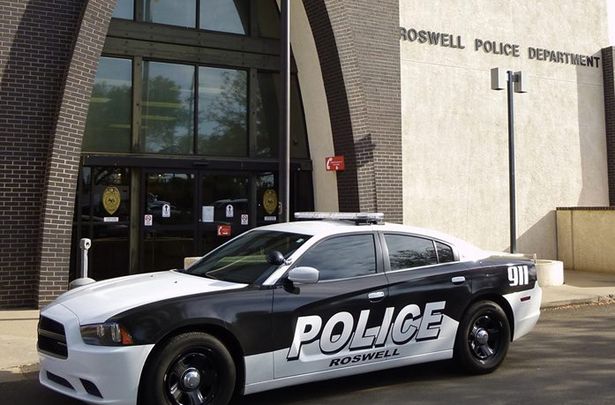 Officer Valerie Palombi, of the Roswell Police Department, was arrested after Chaves County Sheriff’s Deputies responded to a call for a suicidal person. Initially when officers arrived, Palombi was standing on her back porch with a gun in her hand. Instead of killing her, like they would with anyone else they encounter with a gun (or anything else) in their hand, the deputies simply allowed her to walk into the house.

She then began firing her gun inside the house, including several shots as deputies approached to check and see if she had harmed herself. Once again, instead of storming the house guns blazing, as they would with anyone else that didn’t own a magical shiny badge, they just waited outside for her to reemerge still armed with a handgun.

When ordered to, she refused to drop the handgun and instead began approaching the deputies and RPD officers, while still holding the gun. Yet again, unlike they routinely do with anyone that represents any sort of vague or even downright  imaginary threat to them, let alone someone actually walking toward them with a gun, they refrained from unloading every bullet in their guns into her.

Police and deputies say they were then able to approach her and take her into custody.

“All of us at the Roswell Police Department are shocked and saddened by what occurred involving our fellow officer,” RPD Chief Phil Smith said. “We’re concerned for the officer’s well-being and we stand ready to offer any assistance to help address whatever brought her to this stage. At the same time, we are confident, through the sheriff’s office investigation, all laws will be enforced.”

“We in law enforcement are often called upon to intervene in people’s lives when they are at their very worst. These situations are difficult and frequently dangerous. When the person you are trying to help is somebody you know and have worked with, it is even more emotionally challenging. We are thankful we were able to resolve this situation without any of the responding officers being hurt. As partners with the Roswell Police Department, we too feel their pain and we offer any assistance possible as we move forward,” Chaves County Sheriff Britt Snyder said.

Police say Palombi was hospitalized after being struck by beanbag rounds fired at her as she approached RPD deputies with a gun in her hands. Palombi was described as being in stable condition as she continued medical treatment at a hospital.

It is pretty fortunate that this wasn’t one of those situations where the person the cops had to deal with was a clear and obvious danger to them or in possession of some sort of lethal weapon that could potentially be used against them. I’m sure if it was someone they didn’t know and work with refusing to drop a gun they had already fired several times whose life they were intervening in they would have gone out of their way to resolve it without shooting them to death.

It’s actually amazing how often they manage to find some way to take off duty cops into custody during armed standoffs without resorting to a hail of bullets. It’s almost like they could even avoid shooting unarmed people if they actually wanted to.