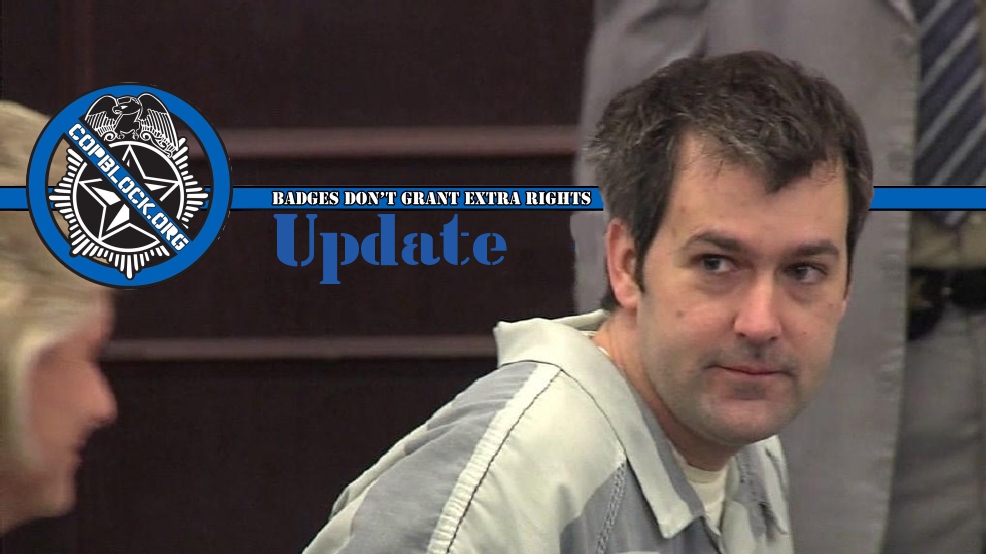 Michael Slager, the North Charleston, SC. cop who was caught murdering Walter Scott on video, has filed a new motion seeking an opportunity to post bail while he awaits trial. As reported here at CopBlock.org several months ago, Slager was refused bail by Circuit Judge Clifton Newman because he represents “an unreasonable danger to the community.”

After a motion they filed last week asking for his trial to begin in the spring was rejected, Slager’s lawyers cited  health problems, as well as anxiety and “concern about his fate,” he’s supposedly developed as a result of conditions in jail as reasons to justify him being released on bond.

Signed by defense lawyer Cameron Blazer of the Savage Law Firm, the filing mentioned that Slager has been a focus of a ramped-up surveillance program at the jail. While officials insist that the effort to intercept telephone calls and mail is meant to root out threats involving the high-profile inmate, the motion called it “completely divorced from any (jail) safety concern.” Jail officers routinely listen to Slager’s personal conversations, the filing stated. The lack of privacy has “acutely constrained” Slager’s ability to prepare for trial, Blazer wrote.

Slager also has fallen ill and lost 25 pounds, the attorneys said. Past filings noted that he has celiac disease, causing him to react negatively to gluten. He often faces the “unacceptable choice … of being either hungry or sick” because the jail cannot completely accommodate his diet, the motion stated.

So yeah, jail sucks, the food is horrible, and they spy on you while you’re there. As shocking as that is to pretty much nobody on the planet (and is in fact an issue that should be addressed), the fact that you were wearing a police uniform when you committed murder shouldn’t give you any extra consideration when complaining about that.

It was recently announced that one of the agents who investigated the murder of Walter Scott by Michael Slager was fired in August after posting on Facebook stating that prosecutor’s case in an unnamed homicide probe was “flawed.” Although, the case wasn’t  specified by name in State Law Enforcement Division (SLED) Special Agent Almon Brown’s post, the fact that it was made public in a filing of court papers by Slager’s attorney has led to speculation that he was referring to his case.

According to the PostAndCourier.com, this, along with other recent incidents, has created doubts about whether SLED can objectively perform  their duty to investigate police shootings as a neutral party:

The documentation has raised further questions about SLED’s ability to thoroughly and independently investigate police shootings in South Carolina. Most agencies in the state ask SLED to conduct probes into shootings involving their officers.

SLED also fired an agent last year over alleged dishonesty, accusing Michele China, a senior agent in the Lowcountry, of doctoring paperwork in a child death probe and inserting a confession into a memo about an interview with a suspect in the case.

Brown has served as an expert on a federal committee on bloodstain analysis, according to a Commerce Department website. He also has been the second vice president for the South Carolina division of the International Association for Identification, a group of forensic scientists.

In his August letter about the agent’s firing, Keel said Brown had “acted improperly” on July 8 when he posted on another person’s public Facebook page about “a pending homicide case.”

“The Facebook posting included a news article that referenced the subject and victim of the case,” Keel wrote. “You made negative comments about the strength of the prosecution’s case, implying that it was a flawed case.”

The copy of the letter in the motion by Slager defense lawyer Andy Savage does not cite the exact words Brown was accused of using.

Savage asked in the paperwork for a judge to order authorities to hand over information about the internal affairs probe into the Facebook post. The document called Brown a primary investigator on Slager’s case.

When even the police union refuses to overlook the obvious guilt of a police officer, you have to know things are going badly for you. Even in really blatant cases, it’s pretty unheard of for a police union not to uphold the Thin Blue Lie and profess the innocence of fellow cops. That’s not the case with Michael Slager and the Southern States Police Benevolent Association, though. Apparently, even the most ardent of police murder enablers can see the writing on the wall for a guy who was caught on video (see below) executing someone from behind as he ran away.

Slager paid the organization a monthly fee for insurance that would provide him a legal defense if sued or charged with a crime in connection with his actions as a police officer. But the organization abandoned him after Slager was accused in April of killing Walter Scott during an on-duty confrontation, according to the lawsuit…

Slager’s coverage through the PBA entitled him to legal representation for “any duty related shooting or action which results in death or serious injury,” according to the lawsuit. He has maintained that he was acting within the scope of his duties at the time. He has pleaded not guilty to the murder charge and remains jailed while awaiting trial.

The PBA initially assigned criminal defense attorney David Aylor to represent Slager. Aylor released a statement on his behalf the day before the video surfaced.

The next day, however, when Slager was charged with murder and the video of the shooting went viral around the world, Aylor withdrew as Slager’s lawyer, calling the incident “a terrible tragedy that has impacted our community.”

Slager requested that the PBA provide him with another attorney, but on April 8 the organization turned him down, the lawsuit stated. In doing so, the PBA cited a clause in its insurance coverage allowing it to withhold benefits if it determines an officer had “committed an intentional, deliberate and/or illegal act, either civilly or criminally,” the lawsuit stated.