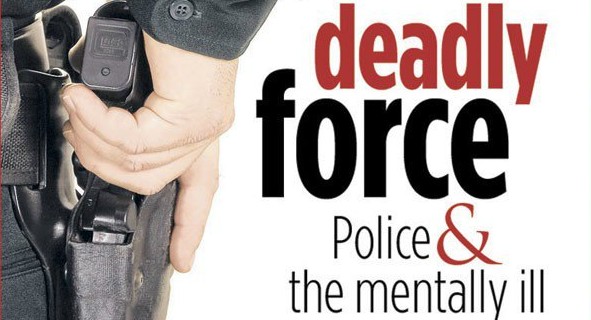 In a new study that further reveals the necessity to properly train police officers to deal with people with mental illness, data shows that such individuals are 16 times more likely to be killed by cops than the rest of the population.

Released on Thursday by the nonprofit Treatment Advocacy Center, the study looked at the proportion of total contacts in which individuals were approached or stopped by police that resulted in a death of someone who has severe mental illness.

That number was then divided by the same proportion of people without severe untreated mental illness, which showed that around one in four fatal police encounters involve mentally ill suspects.

The data also suggests that Americans with severe mental illness are also involved in at least one in 10 calls with police and account for one in five people incarcerated in jails and prisons across the country.

“An estimated one in three individuals transported to hospital emergency rooms in psychiatric crisis are taken there by police,” the report says.

The researchers of the study are calling for lawmakers to implement policies that improve the mental health system, fund reliable tracking of use of deadly force by police, and ensure that mental illness in fatal police encounters is reported.

“It should horrify but not surprise us that people with untreated mental illness are over-represented in deadly encounters with law enforcement,” executive director of Treatment Advocacy Center and a co-author of the study, John Snook said.

“Individuals with untreated mental illness are vastly over represented in every corner of the criminal justice system. Until we reform the public policies that have abandoned them there, these tragic outcomes will continue.”

Police only receive an average of eight hours of training to de-escalate tense situations and spend only eight hours learning strategies for handling the mentally ill.

Obviously people with mental illness are going to have more encounters with police officers as they exhibit a behavioral disparity when compared to the rest of the population, but mental health experts assert that cops need to at least quadruple their training.

They say officers should be required to spend as much time learning crisis-intervention tactics as they currently spend learning to use their weapon – which is around 60 hours.

Critics are also pointing their fingers at budget cuts for psychiatric services, which have fallen by as much as 30 percent in some states over the last several years.

While there is no federal accounting of or reliable national data on police shootings of the mentally ill, other recent studies show that during some years, more than half of all people killed by police have suffered from mental health problems.