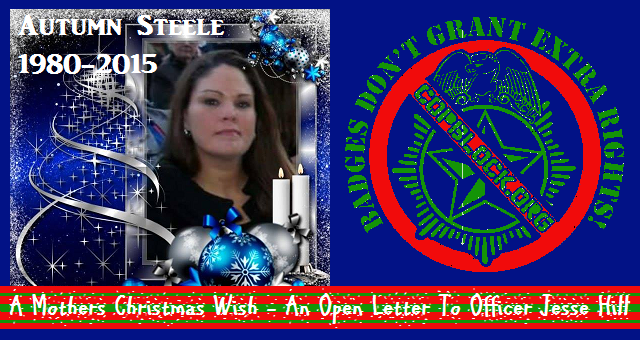 Earlier this year I met the mother of Autumn Steele, who was accidentally killed by a Burlington, Iowa police officer who slipped while trying to shoot the family dog. After speaking with her mother and writing THIS ARTICLE detailing the case, we continued to keep in touch, and eventually I came to consider her a true friend. As a result, I have come to understand the tragedy of senseless police violence through a mother’s perspective, as well as framing different ideas in that perspective to expand my own thinking and empathy.

With the holidays approaching we are bombarded with messages of family and togetherness. So what would it be like to be the mother of someone who was senselessly killed since the last holidays by one of the people supposedly entrusted with protecting us? When around each corner there was a reminder of family and togetherness and ultimately that this would never be the same for you again, how would that feel? And so I tried to empathize with that and I found myself empathizing with everybody who lost somebody they love to senseless police violence in the last year. So while I am going to specifically address Officer Jesse Hill, this message goes out to every cop who tore a family apart this year out of their own clumsiness, neurotic fear, stupidity or plain old love of violence and domination.

Greetings to you and your family. I wish you all health, prosperity and happiness in the coming year and beyond. As I am sure you know, family is what this holiday is all about. So while you are enjoying the company and warmth of your family, I would like you to consider a few things. Earlier this year you made a mistake. Because of that mistake there is an entire family whose Christmas will be sad, painful and empty this year. It may have been an accident, Jesse, but it was your fault. It was your actions that led to the accident that killed an innocent human being. A citizen who you took an oath to serve and protect. You broke that oath, Jesse. And in doing so you took away Autumn Steele, a daughter, mother, sister, wife, cousin and friend.

Since we both know that you can hide behind that thin blue line and never face any consequences, which is what has happened, that oath has become meaningless. There is only one way that you can make it meaningful, Jesse. There is only one way that you can be guided by your honor and dignity to do the right thing. Quit being a police officer. You proved that you were unable to handle the stress of that job. The right thing to do is to walk away from it. Show us that you are more concerned with character and values than you are with your pride or career. What do you stand for, Jesse, as a man? Are you the kind of man who would break an oath and then pretend nothing ever happened just to benefit yourself?

I am going to give you the benefit of the doubt, Jesse. I am going to assume you took the job of police officer because you wanted to serve your community and keep it peaceful and safe. However, you made a bad decision that led to events beyond your control that killed a human being who was failed by the oath you took. There are two ways a man can handle his failures. He can double down on them and plow right through life compounding his failures and ignoring them. That man is the man who threatens the safety and peace of a community, not the one who upholds it. The second kind of man will admit his mistakes and his weaknesses and learn from them and move into other areas where perhaps his strengths are better. This kind of man, if he truly wishes to serve his fellow humans, will find a way to do so no matter what he does, and so is not bound to the areas of his failures. So I want you to ask yourself, Jesse, which kind of man are you? Or rather, which kind of man do you want to be? And if life dealt you the hand it dealt Autumn, which kind of man do you want your family to remember you were during their first holiday without you?

Merry Christmas to you and yours, and a Happy New Year!