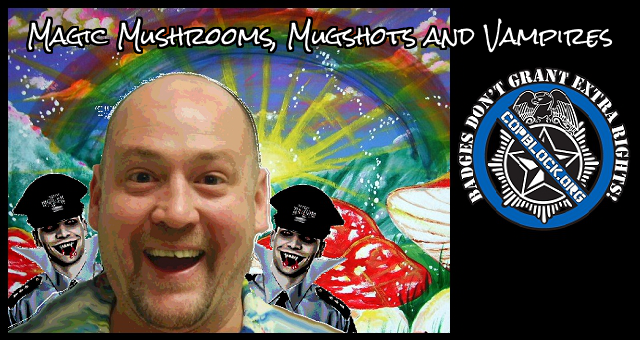 What you are about to read is a cautionary tale involving one mans joy destroyed by a world of monsters. According to HuffPost:

The troopers came to the complex around 6:30 after getting a disturbance call.

Officers found Kalb standing outside a neighbor’s door. He told the police he’d lost his room key and that his neighbor had an extra, so they led him to that apartment, then back to his own, according to the Pittsburgh Post-Gazette.

Kalb invited officers into his apartment to help look for his lost keys. That’s when they discovered the magic mushrooms, according to WTAE.com.

“In plain view, I observed a small amount of marijuana, 70 mushroom plants and 10 mason jars containing active ingredients to manufacture psychedelic mushrooms,” is how arresting officer Ryan Marmol described the scene, according to a police report obtained by TribLive.com.

Kalb was arraigned on charges of manufacture and delivery of a controlled substance, as well as possession of marijuana and drug paraphernalia.

He remains in the Westmoreland County Jail on $10,000 bond, and has a preliminary hearing scheduled for Dec. 15.

Kalb may have smiled in his mug shot, but he might not be so happy about having to look for a new place.

“Those type of illegal activities will not be tolerated and are definitely in violation of the lease agreement,” Washowich said.

Kalb’s only crime here was a failure to understand the nature of vampires. Had he known that inviting them into his home would lead to them feeding upon him, the whole incident might have ended as soon as he crossed his threshold and closed the door. Instead the magic mushrooms gave him a sense that the world was an honest place where people could be trusted. But some people are not people. Some people are vicious creatures who prey on others and exploit even their happiness as a weakness to feed on them. Vampires…cops, what’s the difference?

Yet those aren’t the only monsters that you have to worry about. In Kalb’s unfortunate case, there was also a Big Bad Wolf who came and blew his house down. What the vampires could not finish of Kalb, the scavenger quickly comes in and feeds on, devouring his home and external life where the vampires have nourished themselves from his internal vitality.

And finally stripped of its internal and external properties, Kalb is just a chunk of broken flesh fit only for consumption by zombies. And the undead cannibals do indeed arrive in droves in the comment sections, ripping him apart limb from limb and consuming every last ounce of his privacy, dignity and reputation. Their eternal suffering and misery can only be satiated by the joys and misfortunes of others, unable to feel anything themselves anymore, they swarm in together as a horde to rip away the remnants of anything not already as dead inside as they are.

This is the world the police state creates. A world in which the horror of our mythical monsters is borne in real life and institutionalized and culturally absorbed and reflected. The police state has created a world in which a man who is harming nobody and who is experiencing joy at the core of his existence becomes a target for predators of all types. If you don’t have the freedom to explore your own mind and experience joy, you are not free. None of us are free. Instead we are quickly becoming a world of monsters feeding on one another and gaining in the process only terror and sadistic ecstasy. The police state has reduced our lives to a meaningless maze in which individual progress is irrelevant and in which enlightenment either leads to or becomes its own punishment.

Never invite vampires into your home.