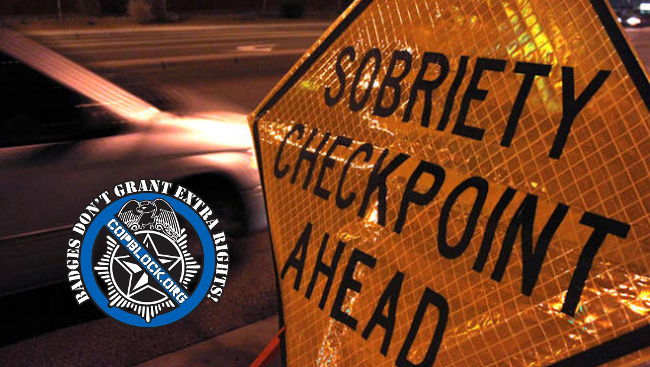 A DUI checkpoint conducted in Fresno, CA on Friday night yielded only ten arrests. However, it was successful in stealing 26 vehicles from their unlicensed owners. The total number of vehicles that passed through the checkpoint is unknown but the impound to arrest ratio is 2.5/1. It has me asking, “are DUI checkpoints really about stopping drunk drivers or generating revenue through impound fees and citations?” Police roadblocks are not only reminiscent of WW2 era Germany, or modern day Palestine, but just like the TSA, DUI checkpoints are just an actor in the state’s security theatre.

From the Fresno Bee.

The operation involved 11 extra officers paid solely through a grant made possible by the National Highway Traffic Safety Administration and funded through the California Office of Traffic Safety, police said.

Ten people were arrested on suspicion of driving under the influence of drugs or alcohol. As a result of people driving without valid licenses, 26 vehicles were impounded during the operation.

DUI checkpoints are seen as necessary by governments, individuals and organizations such as MADD(Mothers Against Drunk Driving). By stopping drunk drivers before an accident occurs, they claim to have made the world a safer place. In reality what they have done, is punish someone who victimized no one.

There are many problems with these types of operations, the first few that come to mind are…

Don’t think I am defending drunk driving. I already admitted in this article that it is reckless, irresponsible and should not become routine in your daily endeavors. I am however, defending the idea that without a victim there cannot be a crime. The conclusion we should all come to is, we are responsible for our actions regardless of intoxication.

If I lose control and crash into your house sober, I have wronged you. I’m not going to be charged with a crime but I am still expected to cover the repairs, or in some way provide restitution for my actions. However, if the same thing happens when I am under the influence, criminal charges are attached.

Check out this video from the #MACtour where Ademo Freeman helps officer Wes Lambright come to the conclusion that we should all be held accountable for our actions regardless of mindset.

If you live in one of the 38 states that subject you to checkpoints,  you should be able to defend yourself if ever selected. Check out this video where Adam Kokesh is stopped at a DUI checkpoint. The officer goes through the “have you had anything to drink?” routine, Adam answers their questions with questions of his own and after a couple of questions the officer sends Kokesh on his way.

Hopefully this article and the videos within are educational and you are now better prepared to protect yourself from unnecessary infringements by police. Remember if you do encounter heavy handed police, the first thing you should do is record the interaction, then you should use the submit tab to share your story with us.